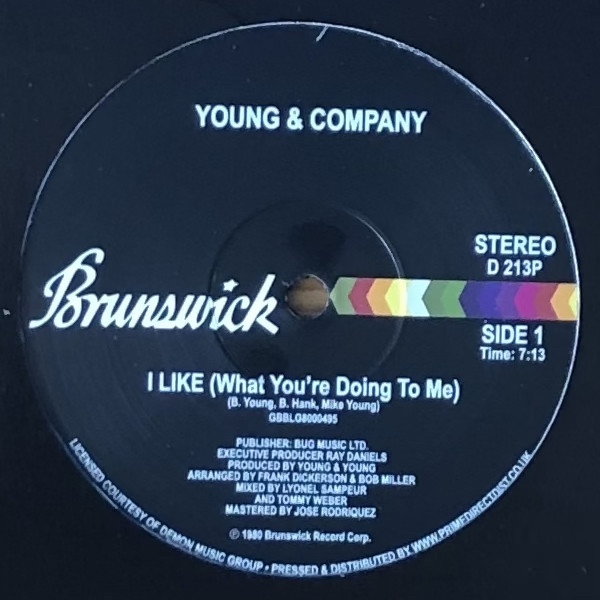 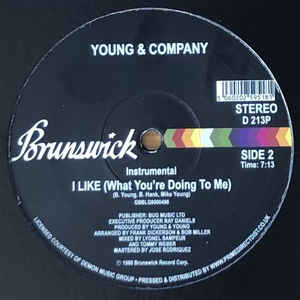 - NEW RELEASE
Sorry, this item is currently unavailable.
ARTIST:
Young & Company
TITLE:
I Like (What You're Doing To Me) RSD 2021
LABEL:
Brunswick
CATNO:
D213P
STYLE:
Disco /
FORMAT:
Vinyl record
DESCRIPTION:
Re-issued For RSD 2021 Insanely catchy 1980's Disco jam from Young & Company on Brunswick. 40 years down the line it sounds as good as it did on day dot. Killer funk guitars, sensuous vocals and luscious harmonies complete with that classic Brunswick touch. Original reissue as in original Brunswick sleeves as if roller-discos never left us.

1) Company, formed by guitarist Derek Bailey in 1976, is described by Incus Records as "an association of improvising players – not a fixed group but an assortment of musicians who come together in various combinations from time to time. The first Company Week was in 1977 and, with a couple of exceptions, was an annual event in London until 1995. Since then, Company events have also taken place in many other parts of the world, in Hakushu (Japan) in Chattanooga, New York, Marseille and various other places." 2) Brian Hannon and Kelly Grant, former Catholic grade school friends, both moved to Charleston after graduating from college, eventually reconnected and started playing music together under the name Company. Throughout their journey, the duo experienced a tour with Band of Horses, SXSW, an EP release and the recent release of their debut album, Holy City. Tragically, after the album release, Kelly Grant unexpectedly passed away. 3) "Company" is also a common, albeit incorrect, tag often associated with various broadway shows. If this non-artist appears in your charts, do last.fm and yourself a favor. Fix your tags by putting the actual artist name in the artist field. Not the show name, not “Company”, but the actual artist name. 4) Dubstep artist from southampton. small time. Read more on Last.fm. User-contributed text is available under the Creative Commons By-SA License; additional terms may apply.
FREE SHIPPING ON ORDERS OVER £100 TO UK MAINLAND ONLY
See exclusions
View Cart