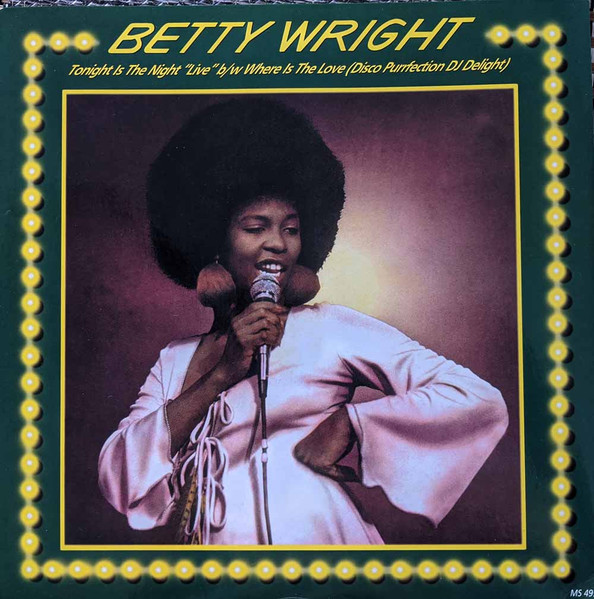 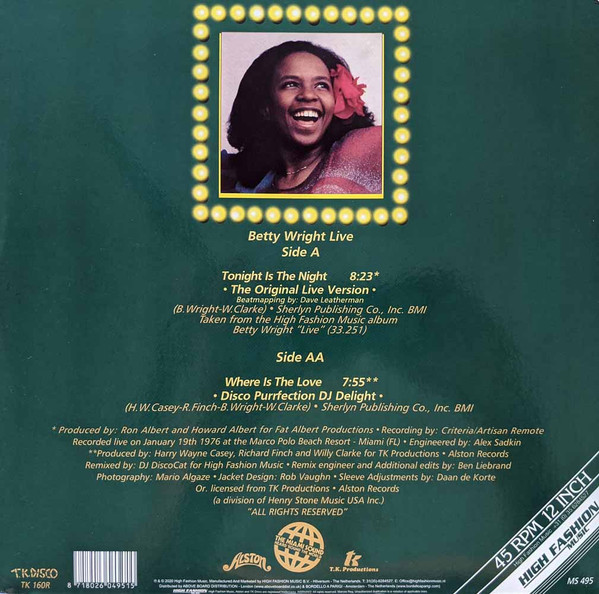 We pay a tribute to Betty with this unique 12” release, featuring 2 of her greatest hits.

“Tonight is the night” (yes, the famous full 8 minutes live version!) appears on the “A” side of this 12”, while on the AA-side it features the 7 minutes long and easy mixable “Disco Purrfection Remix” of “Where Is The Love” by Canadian DJ DiscoCat, now however edited to perfection by Ben Liebrand at a steady 128 BPM.

”Tonight Is The Night” is taken from the (previously top10 Billboard-) album “Betty Wright Live”, which vinyl-edition will shortly be re-released with bonus tracks on the High Fashion Music label.

Bessie Regina Norris (born December 21, 1953 - died May 10, 2020), better known professionally as Betty Wright, was an American soul and R&B singer, songwriter and background vocalist born in Miami, Florida, who rose to fame in the 1970s with hits such as "Clean Up Woman" and "Tonight is the Night". Wright was also prominent in regard to the use of whistle register, the highest human singing register. She influenced a generation of female singer-songwriters and also influenced the world of hip hop who sampled some of her more popular material. Starting singing gospel with the family group, the Echoes of Joy, Wright began switching to R&B music in 1965 when she was only 11. In 1968, she released her first album, My First Time Around, at the age of 15, and scored her first hit, "Girls Can't Do What Guys Can Do". It was not until the end of 1971 that Wright's most successful phase of her career took place. The song, "Clean Up Woman", became a Top 5 pop and R&B hit, and would later influence a remix of Mary J. Blige's "Real Love" single with the sample of its guitar riffs; R&B girl group trio SWV's "I'm So Into You" also featured a sample from "Clean Up Woman", as did Afrika Bambaataa's song "Zulu War Chant". In 1974, Wright scored big with the songs "Tonight is the Night" (about a real-life love affair that happened with Wright when she was a teenager) and "Where is the Love" (which won her a Grammy for Best R&B Song). After experiencing a brief slump in the early 1980s, she rebounded founding her own record label, Ms. B Records, and in 1988 made music history by being the first woman to have a gold record on her own label, with the release of Mother Wit, which featured two of her biggest hits in years, "No Pain (No Gain)" and the "After The Pain". On both songs, Wright displays her powerful upper register capabilities and five-octave range. In 1989, Wright released 4u2njoy which features the hit songs "From Pain To Joy", "Quiet Storm" and "Keep Love New". Her subsequent albums Passion and Compassion, B-Attitudes and Fit For A King kept her fanbase satisfied. By 2001, a compilation album, The Very Best of Betty Wright, was released. In 2007, Wright scored her most successful single in over a decade with "Baby", a duet with fellow Soul singer, Angie Stone. The song peaked at #22 on the R&B chart and #2 on the Hot Dance Club Songs chart. Wright mentored several young singers, and did vocal production for the likes of Gloria Estefan, Jennifer Lopez and Joss Stone. In December 2010, Wright was given another Grammy Award nomination for the song, "Go", for the Best Traditional R&B Vocal Performance. In January 2011, Wright released her first album in ten years, Betty Wright: The Movie, and was credited to Betty Wright & The Roots . On May 10, 2020, Wright sadly passed away due to cancer at age 66. Read more on Last.fm. User-contributed text is available under the Creative Commons By-SA License; additional terms may apply.
FREE SHIPPING ON ORDERS OVER £100 TO UK MAINLAND ONLY
See exclusions
View Cart