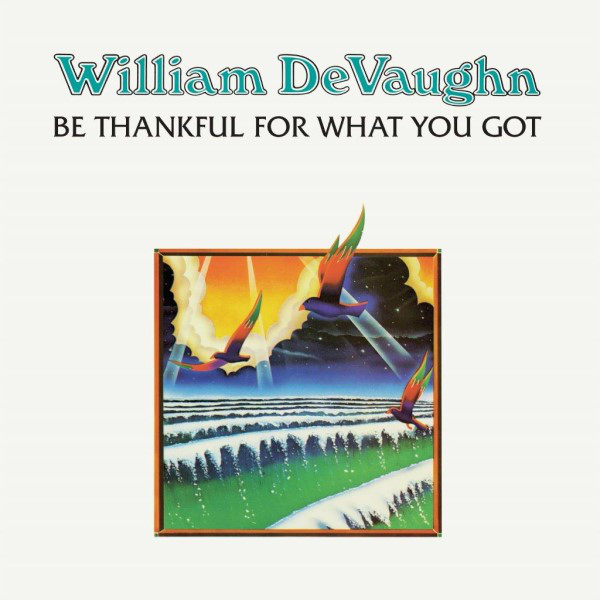 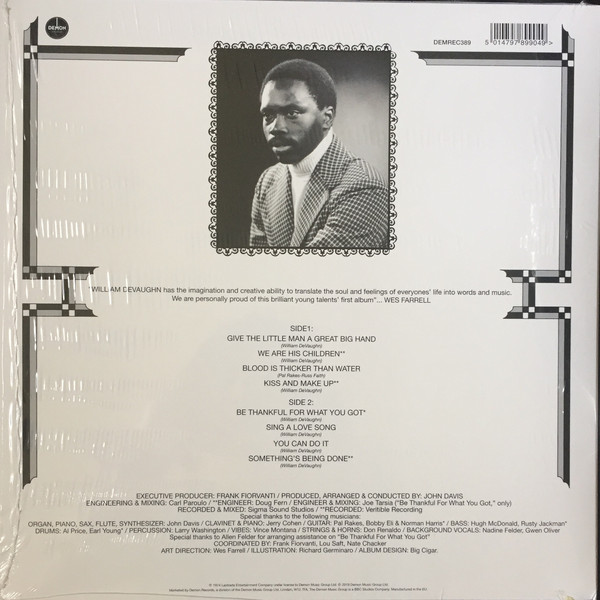 WILLIAM DEVAUGHN - BE THANKFUL FOR WHAT YOU GOT

William DeVaughn, a native of Washington, D.C., beat the odds when "Be Thankful for What You Got," scaled the charts and sold a million copies. You see, DeVaughn paid for the session. All artists who signed with Omega Productions paid to record. The title track, with its cool, shuffling beat and Biblical-influenced lyrics, was the summer jam of 1974. "Diamond in the back, sunroof top, digging the scene with a gangster lean" was the buzz phrase. The rest of the songs are charming and have merit, but lack the impact and timing of the title track.

William DeVaughn (b 1948, Washington D.C.) is an American R&B singer, songwriter and guitarist, best known for the hit song "Be Thankful for What You Got". DeVaughn was a salaried government employee as a drafting technician (according to Casey Kasem,[citation needed] he designed sewers), part-time singer, and member of the Jehovah's Witnesses.[citation needed] He wrote "A Cadillac Don`t Come Easy" eventually re-written to become "Be Thankful for What You Got " in 1972, and spent $900 toward its development to Omega Sound [A Philadelphia Production House] The producers at Omega [Frank Fioravanti and John Davis wanted to go for a nasty groove and wrote an smooth arrangement ,eventually booking time to record at the famous Sigma Sound Studio in Philadelphia Remarkably, the session featured members of the MFSB group - guitarist Norman Harris, drummer Earl Young, bassist Ron Baker, and vibist Vince Montana - these top musicians were secured by Allan Felder, who also developed the separate adlib back -up chorus with his Sister`s vocal choir. .[3]Frank Fioravanti, could have released the record on the companies own label Sound Gems but it was just starting out and instead secured its release on the Roxbury Records record label..>[4] The record sold nearly two million copies on its release in spring 1974, reaching #1 on the U.S. R&B charts and #4 on the Billboard Hot 100 chart, selling a million copies.[5] With a sound and content influenced by Curtis Mayfield, its simple and encouraging lyrics hit home, to the extent that it became featured on gospel radio stations. When his success as a recording artist seemed guaranteed, DeVaughn quit his government job. DeVaughn released an album, featuring mostly songs of an overtly religious character, and the second single, "Blood Is Thicker Than Water", made the R&B top ten and the pop top fifty later in 1974; "Give the Little Man a Great Big Hand" had minor success early the next year.[6] Live, DeVaughn preached to and admonished his audience from the stage. He lost interest in the music industry not long after, working in a record store and again as a draftsman. Fioravanti kept Devaughn under contract hoping to eventually get recording again but it wasn`t until 1980 that they would hook-up for new projects. Fioravanti made a mistake by giving the new album Figures Can't Calculate' to ' (TEC Records) included the title song, which was a minor R&B hit, and a remake of "Be Thankful for What You Got".TEC never paid out any royalties. Still though soon after Devaughn recorded another Fioravanti tune "Creme de Creme " released in Europe on the "Red Bus" label. Until this point in time Fioravanti produced or co-produced all of the singles and albums. In 2004, DeVaughn released a new single, "I Came Back", on his own Mighty Two Diamond Records.{{Citation needed|date=January 2010}} In 2004 he released a new single, "I Came Back", on his own Mighty Two Diamond Records. In that same year, rapper Ludacris sampled this song[dubious – discuss] for "Diamond in the Back" on his album Chicken and Beer. It uses DeVaughn's beat and his voice is used throughout the chorus. Read more on Last.fm. User-contributed text is available under the Creative Commons By-SA License; additional terms may apply.
FREE SHIPPING ON ORDERS OVER £100 TO UK MAINLAND ONLY
See exclusions
View Cart