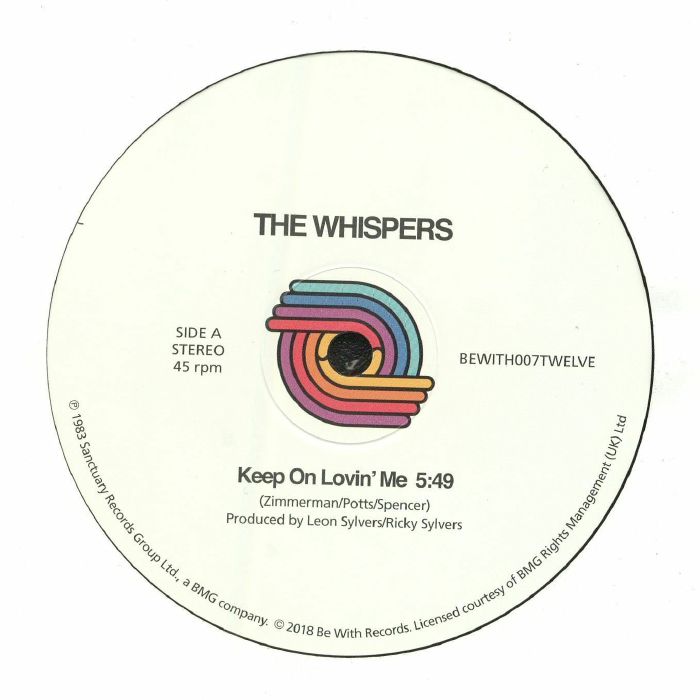 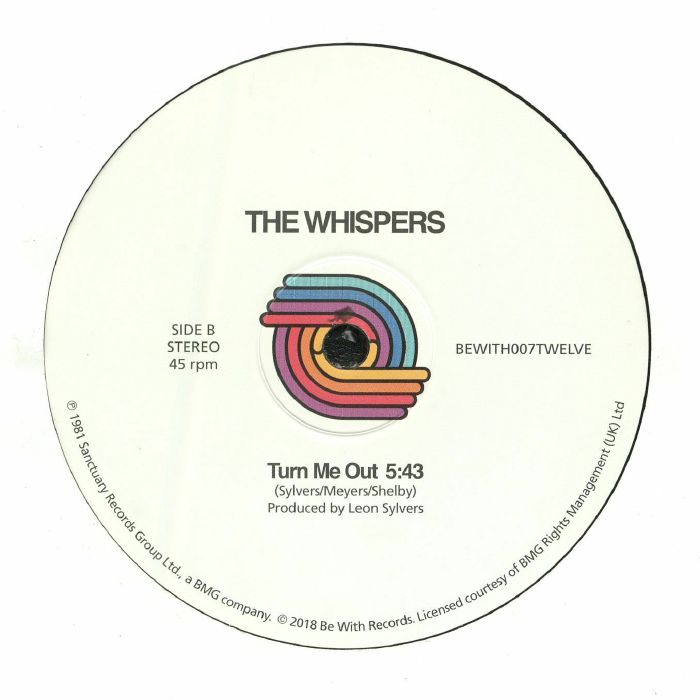 WHISPERS, THE - KEEP ON LOVIN' ME

- NEW RELEASE
Sorry, this item is currently unavailable.
ARTIST:
Whispers, The
TITLE:
Keep On Lovin' Me
LABEL:
Be With Records
CATNO:
KEEP ON LOVIN' ME
STYLE:
Funk / Soul / Boogie /
FORMAT:
Vinyl record
DESCRIPTION:
Boogie Soul / Funk - Two seminal 12" mixes of a pair of enormous tracks from The Whispers. Both boogie/street-funk flavoured, these sought-after versions have never been paired on the same record before.

Side A features the notorious anthem “Keep On Lovin’ Me” (the one with *that* life affirming video) whilst over on the flip you’ll find the outstanding, semi-slept-on “Turn Me Out”.

Less of a whisper and much more of a future bellow; these 1979 disco boogie gems still shine with such an effortless synth class they sound as if they could strut out of a studio almost 40 years later. "Keep On Lovin' Me" is all about that slinky, molten bassline while "Turn Me Out" fixes our focus more on the Californian band's epic harmonies. Another premium excavation from Be With, we'll keep on lovin' this for a long long time to come.

Last FM Information on The Whispers

The Whispers is an R&B/dance vocal group formed in 1964 in Los Angeles, California. The original members included the twin brothers Scotty and Wallace Scott, along with Gordy Harmon, Marcus Hutson and Nicholas Caldwell. In 1973, Harmon was replaced by former Friends of Distinction member Leaveil Degree. The group scored many hits on the R&B and Billboard Hot 100 charts throughout the 1970s and 1980s, and they hit #1 on the Hot Dance Club Play chart in 1980 with "And the Beat Goes On/Can You Do the Boogie/Out the Box". The group's sound was marked by Scotty Scott's fluid, melodic voice which featured on virtually all of their hits. Scotty's sound was so distinctive and likeable that, in his heyday, he was as recognizable as such noted R&B lead singers as Ronald Isley of The Isley Brothers. In 1987, they enjoyed a career resurgence when "Rock Steady" hit #1 on the R&B charts, and it became their first Top 10 success on the Hot 100, reaching #7. The Whispers also founded the Black Tie record label. In the 1990s, The Whispers joined the Capitol Records family releasing more favorites. Expanding their creative horizons, brothers Walter and Scotty cut “My Brothers Keeper”, a critically-acclaimed duet album in 1993, scoring another R&B hit with a cover of the Intruders' "I Wanna Know Your Name." The 1995 release “Toast to the Ladies” featured a collection of love songs dedicated to women all over the world. In 1997, the group moved to Interscope Records where they featured the works of Baby face once again with their album, "Songbook, Vol. 1: The Songs of Babyface”. Both albums charted on Billboard's top 100 albums. Marcus stopped performing with the group in 1989 due to ill health and the Whispers vowed never to replace him when he died in 2000. In the new millennium, the group still performs around the world to thousands of loyal fans. The group has not made any personnel changes and still consists of Walter Scott, Wallace Scott, Nicholas Caldwell, and Leaveil Degree. They have taken the world by storm, selling out in various casinos and hotels, music venues, and they have a tremendous following throughout the United States, Europe, Asia, and Africa. However, they still find time for charity work with youth education, cancer organizations, 100 Black Men, and Domestic violence charities. On September 23, 2003, The Whispers’ four decades of accomplishments were acknowledged when they were inducted into the Vocal Group Hall of Fame. On June 12, 2005, The San Francisco Chapter of the Grammy Awards presented the Whispers with the prestigious Governors Award, the highest honor bestowed by an Academy Chapter. They were also inducted into the Bay Area Blues Society Hall of Fame in 2006. In 2007, The Black Music Academy of America selected the Whispers to receive their “Living Legends” award. They are one of only a few “old school” groups that can boast of having over 40 years in the industry with a worldwide fan base. The Whispers waited almost a decade to produce a new CD in 2005. This independent product, the first venture of their newly formed corporation Satin Tie Entertainment is a masterpiece entitled, “For Your Ears Only”. According to Walter, “This title was a way of saying to our fans that while we want everyone’s support, we very much want the support of our fans, who have been with us for many, many years.” It made its way up the Billboard chart immediately. In 2007, they release a DVD of their live concert entitled “The Whispers Live From Las Vegas”, the first of its kind. A CD soundtrack of the same concert was also released. CAREER HIGHLIGHTS Seven Gold Albums, Two Platinum Albums, 12 Top Twenty Singles, 40 Charted Hits Since 1970, Four Decades of Pop & R & B FavoritesAmerican Music Award Nominees, Soul Train Award Nominees, Grammy Award Nominees 2003 Vocal Group Hall of Fame Inductees, 2005 S.F. Regional Grammy Governors Award Read more on Last.fm. User-contributed text is available under the Creative Commons By-SA License; additional terms may apply.
FREE SHIPPING ON ORDERS OVER £100 TO UK MAINLAND ONLY
See exclusions
View Cart