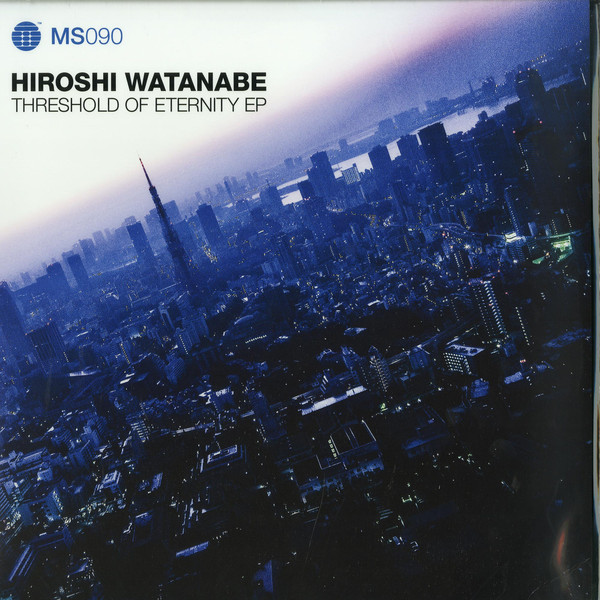 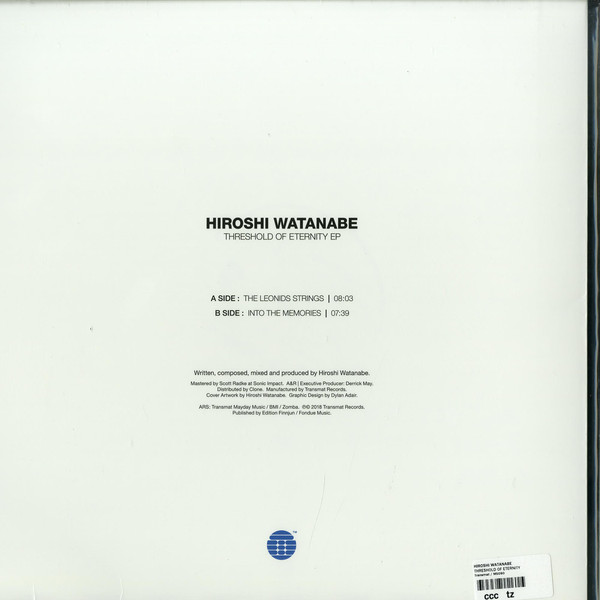 - NEW RELEASE
Sorry, this item is currently unavailable.
ARTIST:
Watanabe, Hiroshi
TITLE:
Threshold Of Eternity EP
LABEL:
Transmat
CATNO:
MS090
STYLE:
Techno /
FORMAT:
Vinyl record
DESCRIPTION:
Lush Melodic Techno 2 Tracker - Hiroshi Watanabe does not hold back on Threshold of Eternity EP. The Leonids Strings is a deeply emotional and delicate string arrangement that leaves the listener beauty struck and in awe. Into the Memory is a dance floor banger which holds true to Watanabe's exquisite skill as a techno producer. The release contains a beautiful balance between groove and beauty which is rarely present in a techno record. The cover photography is a photo by Watanabe himself of his hometown Tokyo.

Hiroshi Watanabe has reworked one of the unarguable highlights of his 2016 album Multiverse. In its original form, "The Leonids" was a soaring slice of futurist techno perfection rich in bubbly synthesizer melodies and sweeping strings. It's this orchestrated aspect of the track that's explored in greater detail on "The Lenoid Strings", a beat-less, neo-classical string quartet cover that heightens the original version's rush-inducing positivity. It's stunning and - as both Derrick May and Watanabe have proved in recent DJ sets - sounds great when dropped over the top of the album mix. On the flip, Watanabe dusts down the drum machines and synthesizers to deliver "In To The Memory", a poignant and melancholic chunk of sci-fi techno deepness.

PLAY
CUE
MP3
1
The Leonids Strings
2
Into The Memories

Hiroshi Watanabe has been involved in the house and techno music world since his graduation from the Berklee College of Music, Boston, U.S.A. where he received a major in Music Composition. Following his move to New York City he started DJing in plenty hot venues. He had a residency at "Save The Robots" but also performed as a guest DJ in high profile New Yorkean clubs such as "Tunnel", "Twilo" and "Speed". The US Billboard club play chart No.1 award arrived with "Kimara Lovelace /Circles", No.3 with "Everyn Champagne King /One More Time" and the maxi singles sales chart No.5 with "You've Got To Be There /Nite System" in 1998. He released numerous tracks under the Hiroshi Watanabe and Nite System projects on New York labels such as Deeper Rekords, Nitegrooves and BPM King Street Sound. Moreover he released an E.P. and the album "Sketch From A Moment" on Frogman Records under the alias Quadra, as well as the album "Beatmania -Beat Indication" on the Japanese label Konami, under his real name. Hiroshi Watanabe has also left his mark in the video games department, as he has given tracks for one of the most famous games "Beat mania" -Konami (which one can find in arcades and Sony PlayStation) achieving pretty big sales. In March 1999 he decided to settle in Japan where he has been acting as producer for Japanese artists and making an even bigger impact with his many remix projects. His new alias Kaito was a 2001 initiative, under which he released "Beautiful Day", "Everlasting", "Awakening", the albums "Special Life", "Special Love" and "Soul of Heart" on the German Kompakt Records. At that same period he started a new deep slow house project called "Tread" with the assistance of graphic designer Takehiko Kitahara and so far "Tread" has released 4 albums from Japanese "Norm".In 2003 he released under the alias "32 project" the "Root of World" EP on the highly acclaimed label , Ibadan Records. He continues giving live performances as Tread and Kaito, but also continues DJing, where he uses his name Hiroshi Watanabe, throughout all popular Japanese clubs. In 2002, he gave a fantastic performance at the Sonar Music Festival in Barcelona, at Vision in Switzerland and at Popkomm in Cologne, Germany. Moreover, the talented Mr. Watanabe has also made music for films, he's composed television jingles as well as music for theatre plays, fashion shows and more. His talent in the fine arts is proved even more so intense since 2002 when he started working as a photographer. Eversince, he has held several Photo Exhibitions at certain galleries and clubs in Tokyo. His first Photo Album accompanied by the "Tiny Balance" DVD with an original soundtrack was released in Japan in September 2004 by Colorve. profile from http://www.hiroshiwatana.be Read more on Last.fm. User-contributed text is available under the Creative Commons By-SA License; additional terms may apply.
FREE SHIPPING ON ORDERS OVER £100 TO UK MAINLAND ONLY
See exclusions
View Cart