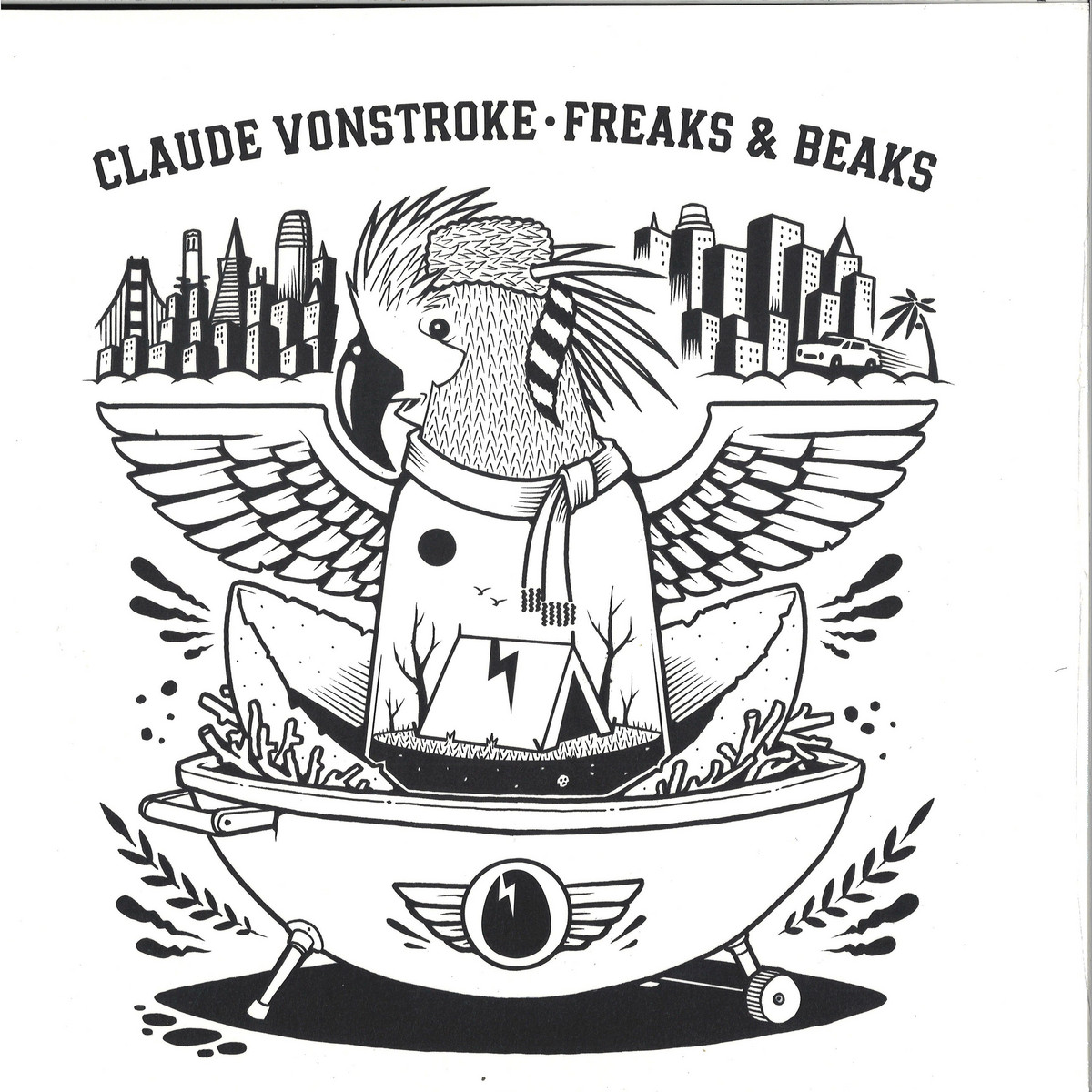 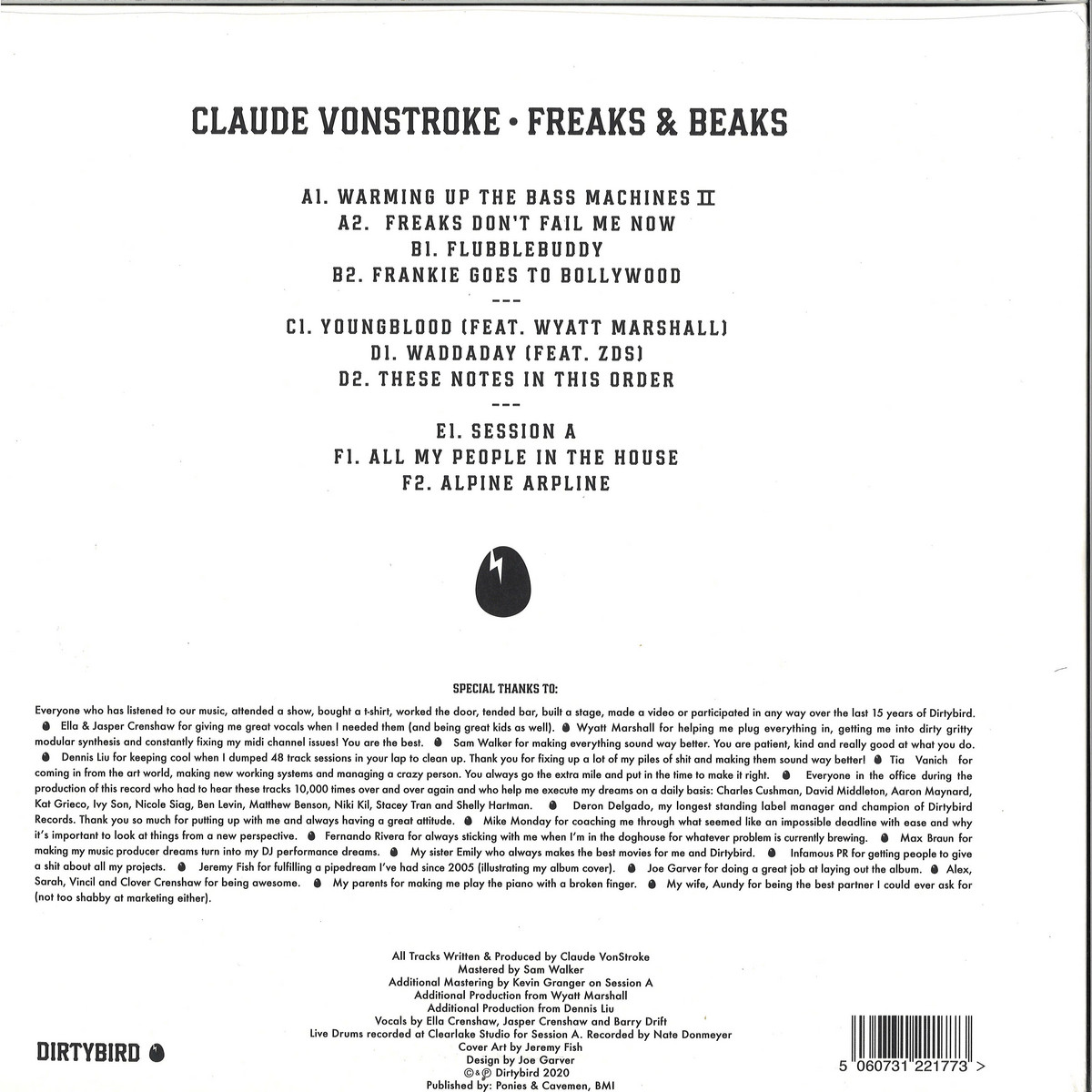 What began as a free party, turned basement record label, has morphed into a truly thriving community whose familial, fun and welcoming vibe has won over hearts and minds across the world. And while Dirtybird has grown and evolved, VonStroke’s core focus on music remains unwavering. The new album ‘Freaks & Beaks’ is a celebration of quirky innovation and a relentless pursuit of something new and fresh, while hearkening back to the freewheeling spirit that inspired the launch of his label. This is a project that draws upon the inspirations of family, old friends, new fans and proper dancefloors.

Claude will let his flock wet their beaks while they wait in anticipation of the new album with two new singles demonstrating the breadth of the dance music landscape explored on the record. Youngblood touches on the deeper sides of Claude VonStroke, a throwback to the label’s early days, featuring local LA music house talent Wyatt Marshall, while All My People in the House is a dancefloor heater that is sure to unite new and old Dirtybird fans together.

Today, Claude also delivers fans part one of an intimate video series, shot by his sister Emily (an accomplished filmmaker), documenting the creation of ‘Freaks and Beaks’, celebrating this historic milestone and taking a deeper dive into the day to day life of Claude VonStroke on the road.

‘Freaks and Beaks’ is the fourth artist album and sixth full-length project from Claude VonStroke. He approached the album with a new process, including committing to daily creative time, experimenting with a lot of new hardware and having fun creating a huge amount of sketches. He made music on many levels of gear all the way from complex modular synths to simple drum apps on his iPad. Keeping it all DIY, he sampled his own voice and his two children on several tracks as well. He allowed himself to breathe while creating over 130 ideas, which were whittled down to the finished 11 album tracks.

Freaks & Beaks nods at the inspirations that underpin VonStroke’s world, inside jokes between him and Justin Martin (FlubbleBuddy), unused experimental live sessions (Session A), playful noodling on synths (Alpine Arpline), obscure French producers (Frankie Goes To Bollywood), championing new talent (Youngblood), irreverent self-aware humor (Birthday Messages) and genre inspirations that range from ghetto tech and drum n bass to hip-hop and breaks. This is VonStroke’s love letter to the vibrancy and genre diversity that have made Dirtybird such a singular label.

PLAY
CUE
MP3
a1
Warming Up The Bass Machines
a2
Freaks Don't Fail Me Now
b1
Flubblebuddy
b2
Frankie Goes to Bollywood
c1
Young Blood (Feat. Wyatt Marshall
d1
Waddaday (Feat. ZDS)
d2
These Notes in This Order
e
Session A
f1
All My People in the House
f2
Alpine Arpline

Claude VonStroke is a tech-house/electro-house producer based in San Francisco, California. "Claude VonStroke" is better known to locals as Barclay Crenshaw, the owner of San Francisco's avant-house label, Dirtybird. The Dirtybird label consists of Crenshaw (VonStroke) fellow producer Justin Martin, and a wide assortment of top remixers from around the globe such as John Tejada, Sammy D, Jesse Rose, and Frankie. In 2005, Dirtybird released a series of daring and creative singles that were played by everyone from Richie Hawtin to Damian Lazarus and received top marks from all the DJ magazines. The idea for Dirtybird began in 2003 when Barclay was producing an intense 5 hour DVD about electronic music called, “Intellect.” San Francisco newcomer, Justin Martin was hired by Crenshaw to help make house music for the DVD. Barclay quickly recognized Justin's talent and took on a role as his manager, negotiating his first deals with Buzzin'fly, Classic, and Utensil Recordings. The “Intellect” project was a labour of love for Crenshaw, taking almost 2 years to make and starring over 35 top producers and legendary DJs such as Derrick May, Swayzak, Derrick Carter, Deep Dish, Paul Van Dyk, Theo Parish, and many more. The main goal of the “Intellect” project was to make an informative DVD that could help DJs advance their careers in electronic music. The result was Crenshaw himself starting Dirtybird Records with Justin and a production career under the quirky alias, Claude VonStroke. In addition to production and label management, Claude VonStroke has an intense regimen for preparation and a great ear for song selection. His DJ sets are always inspiring and surprising. You will never hear a boring bunch of monotonous tracks because just like A&R at Dirtybird, Claude always takes time to find the tracks that mean something. Tricky sound effects, nasty bass, inspiring melodies, and up front originals make for a completely original experience that is not to be missed. His new album, Bird Brain, is out soon on Dirtybird. He currently has one LP out on Dirtybird, Beware of the Bird. Read more on Last.fm. User-contributed text is available under the Creative Commons By-SA License; additional terms may apply.
FREE SHIPPING ON ORDERS OVER £100 TO UK MAINLAND ONLY
See exclusions
View Cart