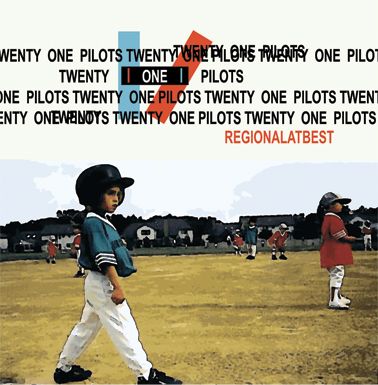 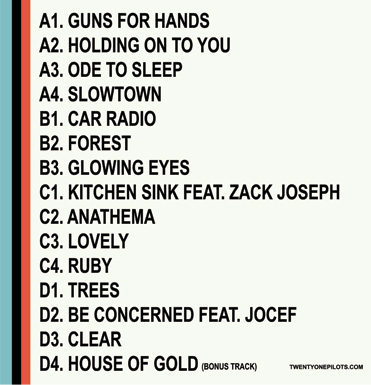 TWENTY ONE PILOTS - REGIONAL AT BEST

The band's signature blend of piano rock, dance music, and hip hop is what makes up the DNA of Regional At Best, but without any of the over-the-top ambition and radio ready sheen that came with the following records. This gives the demo release a level of intimacy that their later works lack. It was this lack of big exposure that gave bandleader Tyler Joseph enough emotional security to feel brave enough to pour his heart and soul into this. He never expected anyone to hear him when he sung about car radios. The result? Some of the best lyrics Tyler has ever written are found here, with two of the best instances found on tracks like Anathema and Kitchen Sink. Instead of being directed to a crowd of people, like in their later works, Tyler's lyrics simply speak to his reflection or maybe even his best friend. Even when his brother (it's his brother right?) guest spots on Kitchen Sink and Be Concerned, the lyrics are thematically tied together.

Twenty One Pilots (stylized in all lowercase and occasionally as twenty øne piløts) is a Grammy Award-winning American musical duo originating from Columbus, Ohio. The band was formed in 2009 by Tyler Joseph along with former members Nick Thomas and Chris Salih, and currently consists of vocalist/keyboardist Tyler Joseph and drummer Josh Dun. They self-released two albums, Twenty One Pilots (2009) and Regional at Best (2011), before being signed by Fueled By Ramen in 2012. Whilst being signed by Fueled by Ramen, they released three studio albums - their signed debut album Vessel (2013), Blurryface (2015), and Trench (2018). Their 6th studio album, Scaled and Icy, was released on May 21, 2021, and is currently their latest release. Tyler Joseph and Josh Dun have earned widespread acclaim for their energetic live sets and distinctive fusion of piano-driven pop and lyrical uplift. No strangers to the road, Twenty One Pilots have built a fervent global following due to their electrifying live performances at innumerable headline shows and tours. Joseph arrived to the band's name while studying the play All My Sons by Arthur Miller. The story centers around a World War II man who, for the good of his business and reputation, makes a tough decision to knowingly send out faulty airplane parts. "Twenty one pilots'" died as a result. Tyler explains that this story of moral dilemma was the inspiration for the band's name. On December 29, 2009, Twenty One Pilots released their debut, self-titled album and began touring Ohio. In mid-2011, bassist Nick Thomas and drummer Chris Salih sequentially left due to busy schedules, both posting farewell notes on the band's Facebook page. Joseph was then joined by Josh Dun, former live drummer of House of Heroes. On July 8, 2011, Joseph and Dun released a second independent album, Regional At Best. Since signing to Fueled By Ramen in 2012, the duo have released their major label debut Vessel in January of 2013, and its explosively popular follow-up Blurryface in May of 2015. Two new singles from the band, named "Jumpsuit" and "Nico and the Niners", were simultaneously released on July 11, 2018. A third single, named "My Blood", was released on August 27. Their third debut album, titled Trench, was released on October 5, 2018. A promotional single, named "Level of Concern", was released on April 9, 2020. In that same year, the duo released another single titled "Christmas Saves the Year" on December 8. A single leading up to their sixth album Scaled and Icy, titled "Shy Away," was released April 8, 2021 along with a music video. A second single leading up to the release of Scaled and Icy, titled "Choker", was released April 29, 2021, along with a music video. Their third single "Saturday" was released on May 18, 2021. The rest of the album was released three days afterwards. Read more on Last.fm. User-contributed text is available under the Creative Commons By-SA License; additional terms may apply.

OTHER RELEASES ON AAA RECORDINGS OR BY TWENTY ONE PILOTS:

We have many other items in stock by Twenty One Pilots and on the label AAA Recordings.