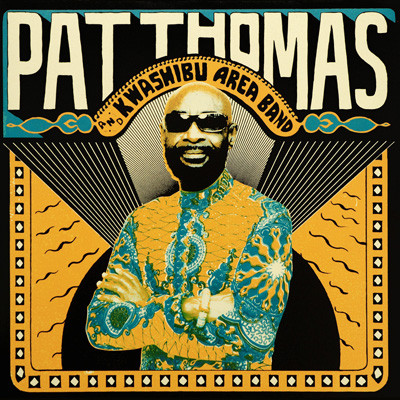 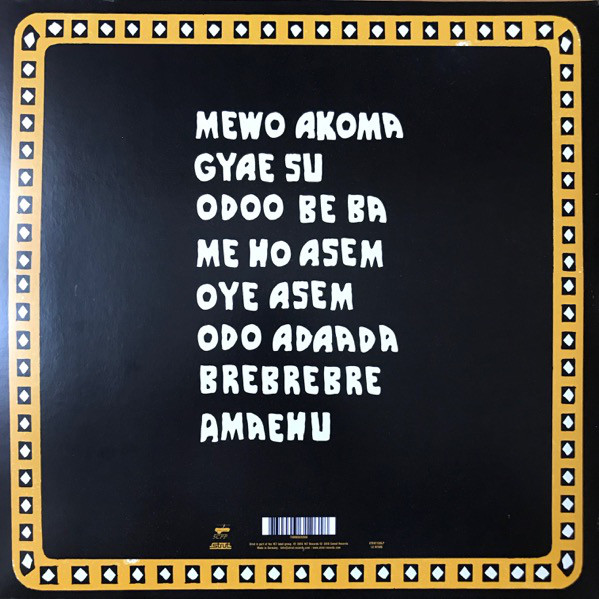 Strut Records surprises yet again with this date by Pat Thomas & Kwashibu Area Band. Its frontman was dubbed "The Golden Voice of Africa" during his hitmaking days in the '70s and '80s (on three continents) and is one of the most legendary singers to come out of Ghana's Accra highlife scene. He and frequent collaborator Ebo Taylor (who provides horn arrangements here) have been working together on and off since the mid-'60s. This set was recorded at Accra's Lovelite Studios in analog -- there are no samples or digital sounds. The music includes reworks of some of Thomas' hits as well as new songs. It's played by a killer, young-ish band led by veteran guitarist/organist Kwame Yeboah (Stevie Wonder, Cat Stevens) with very special guest appearances from drummer Tony Allen (who is half-Ghanaian), Hedzolleh Soundz trumpeter Osei Tutu, and Noble Kings' bassist Ralph Karikari. The set cooks from track one. "Mewo Akoma" features Karikari's trademark bass style, driving horns, grooving-chord Farfisa and guitar patterns, and a call-and-response dancing drum pattern. Over eight minutes long, it marries an Ashanti melody to third-generation highlife and Caribbean rhythms. "Odoo Be Ba" features Allen on drums. Based around a vamp created by saxophonist Ben Abarbanel-Wolff, it weaves together Afrobeat drumming, layered, fingerpicked highlife guitars, and knotty Farfisa, with Thomas -- still in gorgeous voice -- crooning, syncopating, and improvising through the lyric and refrains. "Me Ho Asem" is a funky groover marrying highlife to reggae and Philly-tinged soul with poignant lyrics. The reverbed electric piano and Tutu's emotional trumpet solo adds a post-bop jazz element, making it an album standout. "Oye Asem" is an excellent marriage of Afrobeat and highlife. The soaring organ, Allen's hypno snare beat, and Taylor's elaborate horn chart pave the way for Thomas to take off. He digs down into the lyric and liberates it with a sensual loverman charm. This makes a beautiful and contrasting intro for "Odo Adaada," a redo of one Thomas' '80s hits. It's joyous, tropical highlife, and the vocal interplay between the singer and his daughter Nannaya, combined with a skittering Farfisa and killer guitar playing, sends it over the top as a dance jam. Closer "Ama Ehu" is an even more overt tapestry woven from Afrobeat, thanks to Taylor's tough, labyrinthine horn chart and Yeboah's Farfisa and, of course, Allen's drumming -- and classic third-generation highlife. Thomas is so skillful in his delivery, he aims the melodic center of his voice at the mountain of rhythms, and it becomes yet another one. His singing is effortless; so reassuring in its soulfulness it edifies even as it exhorts. For a man in his seventies, Thomas remains a singer of astonishing power; his experience and musicality more than compensate for anything time has tried to steal from him. With this union of old friends and a younger group of disciplined players, his album represents not the glitter of highlife's legacy, but a new frontier.

There are several artists who go by Pat Thomas: 1) Pat Thomas (Born as Kwabena Nyamekye Amoo-Mensah in Agona, Ashanti Region, Ghana in 1951) is a Ghanaian highlife singer, songwriter and musician. Thomas early inspiration to become a singer was a vocalist Joss Aikins. Thomas started his musical career in 1960s when he collaborated with Ebo Taylor. In 1974 he formed the band Sweet Beans and with them he recorded his first album False lover. He recorded his second album Pat Thomas Introduces Marijata with the band Marijata. After the coup in Ghana in 1979 he relocated to Berlin and later settled in Canada. He is now touring worldwide with his Kwashibu Area Band. In June 2015 they released the album Pat Thomas and Kwashibu Area Band to mark 50 years of his musical career. Thomas is known as “The Golden Voice Of Africa”. 2) Born 27 July 1960; Piano, electronics. Pat Thomas started playing at the age of 8 and studied classical music and played reggae. He began playing jazz at sixteen after seeing Oscar Peterson on television then listened to snatches of jazz on the radio before, in 1979, playing his first serious improvised gigs. From 1986 he played with Ghosts which was Pete McPhail and Matt Lewis. In addition to programming his keyboards, Pat Thomas also utilises prerecorded tapes. He told Chris Blackford (1991), 'As far as the tapes are concerned I'll probably just sit in front of the TV and tape whatever's going on and so some editing afterward to decide what might be useful. ...But I don't actually put a label on each tape saying what's on there, so when I come to use them I don't know what I'm going to be playing. That obviously prevents me from setting things up. I pick them at random and see what happens. So I'm just as surprised as anybody else at what comes out'. In 1988 he was awarded an Arts Council Jazz Bursary to write three new electroacoustic compositions for his ten-piece ensemble, Monads: Roger Turner and Matt Lewis, percussion; Pete McPhail, WX7 wind synthesizer; Neil Palmer, turntables; Phil Minton, voice; Phil Durrant, violin; Marcio Mattos, bass; Jon Corbett, trumpet; Geoff Searle, drum machines. The intention was to feature different aspects of electronics using improvisation so, for example, one piece - Dialogue - featured Pete McPhail and Neil Palmer, another concentrated on the interaction of percussionists and drum machines, and a third piece had Phil Minton and Jon Corbett improvising with a computer. The pieces were performed at the Crawley Outside-In Festival of new music in 1989. Pat Thomas was invited by Derek Bailey to play in Company Week in 1990 and 1991 and he also took part in the Ist International Symposium for Free Improvisation in Bremen with the guitarist. He has been a member of the Tony Oxley Quartet (documented on Incus CD 15) and played in Oxley's Angular Apron along with Larry Stabbins, Manfred Schoof and Sirone at the 8th Ruhr Jazz Meeting and in the percussionist's Celebration Orchestra. He plays with Lol Coxhill in a range of combinations from duo to being a member of 'Before my time', is a member of Mike Cooper's Continental Drift, and he has a well established duo with percussionist Mark Sanders and a trio with Steve Beresford and Francine Luce. In 1992 Pat Thomas formed the quartet Scatter with Phil Minton, Roger Turner and Dave Tucker; funded by the Arts Council they toured the UK in 1993 and again at the beginning of 1997. On the 'Festival circuit', Pat Thomas has appeared at: the Young Improvisors Festival at the Korzo Theatre, Den Haag (with Jim O'Rourke, Mats Gustafsson and Alexander Frangenheim); Angelica 95 in Bologna, Italy; the Stuttgart 5th Festival of Improvised Music 96 (with Fred Frith, Shelly Hirsch, Carlos Zingaro and others); and the 3rd International Festival 96 in Budapest (with Evan Parker, Phil Minton, John Russell and Roger Turner). 3) Mostly know for being the drummer of Rochester, NY alternative rock band http://www.last.fm/music/absolute%20grey, Pat also had a folk rock solo project and started the Heyday record label. 4) Patricia "Pat" Thomas was a Jazz singer who recorded mostly during the 1960's. Her hits included "One Note Samba," "Desafinado" and "I Can't Wait to See My Baby's Face." She was nominated for a Grammy for "Desafinado," only to see Ella Fitzgerald later record the song and win the award. Read more on Last.fm. User-contributed text is available under the Creative Commons By-SA License; additional terms may apply.
FREE SHIPPING ON ORDERS OVER £100 TO UK MAINLAND ONLY
See exclusions
View Cart