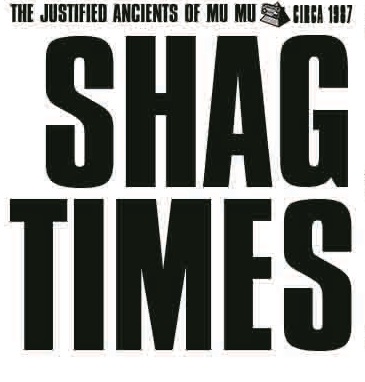 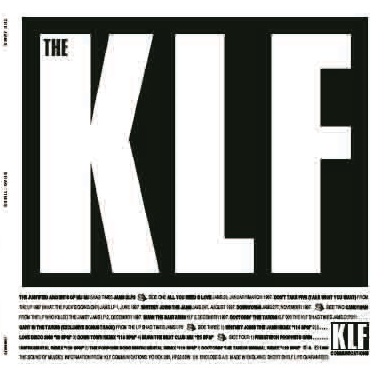 The only band to use the Beatles, Whitney Houston, Mission Impossible, Petula Clark, Doctor Who, ABBA, and the French national anthem as art statements. Circa 1987: Shag Times, one of the many deliberate cash-ins released in the wake of the Timelords, confirmed Bill Drummond and Jimi Cauty's supremacy over every last imitator and pop stunt plagiarist.

Last FM Information on The Justified Ancients Of Mu Mu

In 1987, Bill Drummond and Jimmy Cauty's collaborations began in London, England. They assumed alter egos - King Boy D and Rockman Rock respectively - and they adopted the name The Justified Ancients of Mu Mu (The JAMs), after the fictional conspiratorial group "The Justified Ancients of Mummu" from The Illuminatus! Trilogy. In those novels, the JAMs are what the Illuminati (a political organisation which seeks to impose order and control upon society) call a group of Discordians who have infiltrated the Illuminati in order to feed them false information. As The Justified Ancients of Mu Mu, Drummond and Cauty chose to interpret the principles of the fictional JAMs in the context of music production in the corporate music world. Shrouded in the mystique provided by their disguised identities and the cultish Illuminatus!, they mirrored the Discordians' gleeful political tactics of causing chaos and confusion by bringing a direct, humorous but nevertheless revolutionary approach to making records, often attracting attention in unconventional ways. The JAMs' primary instrument was the digital sampler with which they would plagiarise the history of popular music, cutting chunks from existing works and pasting them into new contexts, underpinned by rudimentary beatbox rhythms and overlayed with Drummond's raps, of social commentary, esoteric metaphors and mockery. The JAMs' debut single "All You Need Is Love" dealt with the media coverage given to AIDS, sampling heavily from The Beatles' "All You Need Is Love" and Samantha Fox's "Touch Me (I Want Your Body)". Although it was declined by distributors fearful of prosecution, and threatened with lawsuits, copies of the one-sided white label 12" were sent to the music press, receiving positive reviews and being made "single of the week" in Sounds. A later piece in the same magazine called The JAMs "the hottest, most exhilarating band this year.... It's hard to understand what it feels like to come across something you believe to be totally new; I have never been so wholeheartedly convinced that a band are so good and exciting." The JAMs re-edited and re-released "All You Need Is Love" in May 1987, removing or doctoring the most antagonistic samples; lyrics from the song appeared as promotional graffiti, defacing selected billboards. The re-release rewarded The JAMs not just with further praise (including NME´s "single of the week") but also with the funds necessary to record their debut album. The album, 1987 (What the Fuck Is Going On?), was released in June 1987. Included was a song called "The Queen and I" which sampled large portions of the ABBA single "Dancing Queen". The recording came to the attention of ABBA's management and, after a legal showdown with ABBA and the Mechanical-Copyright Protection Society, the 1987 album was forcibly withdrawn from sale. Drummond and Cauty travelled to Sweden in hope of meeting ABBA and coming to some agreement, taking an NME journalist and photographer with them, along with most of the remaining copies of the LP. They failed to meet ABBA, so disposed of the copies by burning most of them in a field and throwing the rest overboard on the North Sea ferry trip home. In a December 1987 interview, Cauty maintained that they "felt that what [they]'d done was artistically justified." Two new singles followed 1987, on The JAMs' "KLF Communications" independent record label. Both reflected a shift towards house rhythms. According to NME, The JAMs' choice of samples for the first of these, "Whitney Joins The JAMs" saw them leaving behind their strategy of "collision course" to "move straight onto the art of super selective theft". The song uses samples of the Mission: Impossible theme alongside Whitney Houston's "I Wanna Dance With Somebody". Ironically, Drummond has claimed that The KLF were later offered the job of producing or remixing a new Whitney Houston album as an inducement from her record label boss (Clive Davis of Arista Records) to sign with them. Drummond turned the job down, but nonetheless The KLF signed with Arista as their American distributors. The second single in this sequence—Drummond and Cauty's third and final single of 1987—was "Down Town", a dance record built around a gospel choir and "Downtown" by 1960s star Petula Clark. These early works were later collected on the compilation album Shag Times. A second album, Who Killed The JAMs?, was released in early 1988. Who Killed The JAMs? was a rather less haphazard affair than 1987, earning the duo at least one five-star review (from Sounds Magazine, who called it "a masterpiece of pathos". JAMS aka.. time lords, and the KLF, and 2k. Drummond was once a manager of Echo and the Bunnymen, Cauty has worked with the Orb. Read more on Last.fm. User-contributed text is available under the Creative Commons By-SA License; additional terms may apply.

OTHER RELEASES ON AAA RECORDINGS OR BY THE JUSTIFIED ANCIENTS OF MU MU:

We have many other items in stock by The Justified Ancients Of Mu Mu and on the label AAA Recordings.