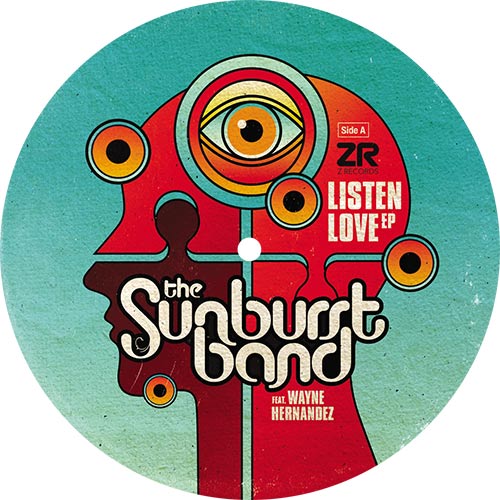 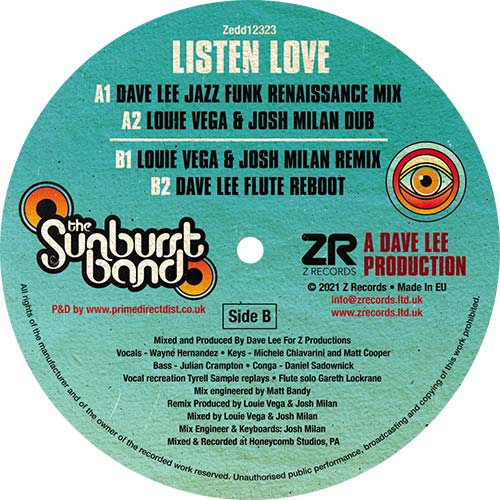 Dave Lee dons his Sunburst Band trousers and calls in the vocal talents of Wayne Hernandez with this slice of Brazilian flavoured Jazz Funk ‘Listen Love’ - yes the Jon Lucien jazz dance favourite. The sizzling drums & percussion blend perfectly with the pulsating bassline that allows Wayne to scat and weave his way into the blissed out yet uptempo jazzy keys. For those thinking this would be an even better track if it had a flute solo, we’ve got you covered! with Dave Lee’s ‘Flute Reboot’ for that maximum Latin edged jazz-funk feel.

On the flip two people who need not introducing, Louie Vega & Josh Milan get frenzied on the drums and piano, as they up the ante and deliver a jazz dance fusion clocking in at 9 minutes. Their mix really works up a sweat in the second half as the groove and scatting lock together for an intense rhythmic workout. All in all a very impressive outing.

Lengthy artist careers in the music business are few and far between, but in the ever-changing world of dance music they are scarcer than a signed Moroder twelve. Joey Negro/Dave Lee’s debut release may have been part of the first wave of UK house back in 1988, but more than 20 years later he is still on top of his game. “I’d been in a few bands in the 80s,” he says, “but when house came along one of the things that appealed to me was that you suddenly didn’t need a group of musicians to make a record. However, having produced loads of keyboard based tracks it’s always nice to go back to the band sound for a change….especially now I’m completely in charge!” The Sunburst Band is a collective born out of Mr Lee’s passion for boogie, funk, disco and jazz. “It’s not like I’m the guy who harps on that it was so much better back in ’78,’” says Dave with a smile, “but at the same time I’m a bit of a polar resistor who goes against the flow. When my mates were buying The Clash and Cocteau Twins, I was into D Train and Funkadelic. Similarly now as so many dance acts are making electro I’ve gone the other way with this project. I’ve missed the performance thing, the intensity of a band playing together. Rock and indie have never moved away from the guitar and drums sound, whereas dance (be it R&B or house) tends to be mainly programmed. And it’s not that I have a problem with that, I just wanted to do something that I don’t hear too often nowadays. Some people might call it retro, but I’m just a guy writing songs and performing them with his band.” Forming in 1998, the release of debut album ‘Here Comes The Sunburst Band’ won critical acclaim with both old school heads as well as nu breed disco and house fans. Tracks like ‘Garden of Love’ and ‘Delicious’ became scene classics, championed by DJs from Pete Tong to 4 Hero to Dmitri from Paris. The follow-up ‘Until The End of Time’ featured cuts like ‘Far Beyond’ which all the top US hip hop guys still spin, and soul anthem ‘Everyday – a favourite with Annie Mac, Trevor Nelson and even Heston Blumenthal, who included it as one of his ‘Desert Island Discs’ on Radio 4. Says Dave: “The last album ‘Moving with the Shakers’ took over me for a while, and I spent 18 months working on it, going back to the songs, honing the production and lyrics, scrapping tracks and starting new ones to make sure there were no fillers. As you can imagine, it’s pretty intense making an album when you’re the main songwriter, producer, label and a&r man. On this third album, I also wanted to say something in the songs and avoid the banal lyrics that plague so much dance music.” Collaborators on ‘Moving With The Shakers’ include Harlem soul legend Leroy Burgess, Diane Charlemagne, who sang on Goldie’s ‘Inner City Life’, and Chaka Khan’s sister Taka Boom. Fulltime front man Pete Simpson is also known for lending his vocal talents to the Unabombers’ alias, The Elektrons. The Sunburst Band are currently touring the world while Dave Lee is currently working on the fourth Sunburst Band studio album to be released early 2012. Read more on Last.fm. User-contributed text is available under the Creative Commons By-SA License; additional terms may apply.
FREE SHIPPING ON ORDERS OVER £100 TO UK MAINLAND ONLY
See exclusions
View Cart