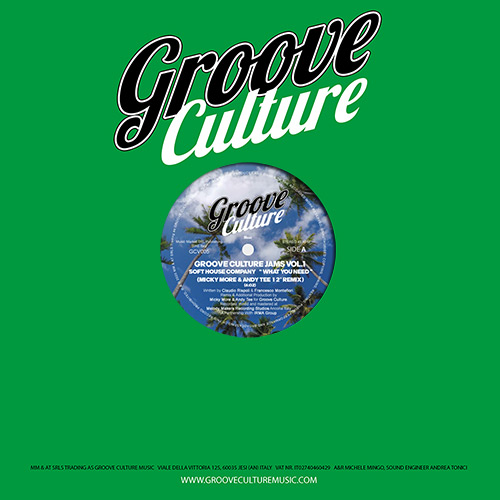 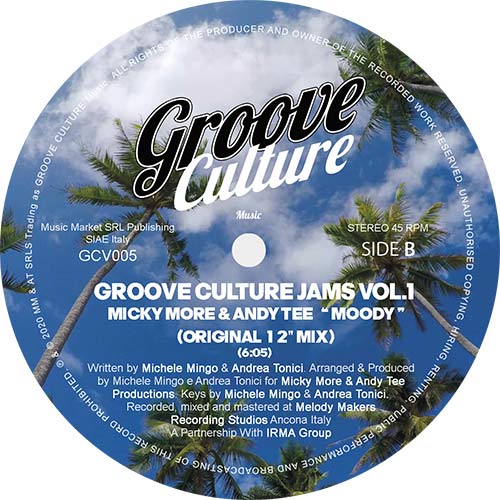 You know what you are going to get when you see the Groove Culture label: big, timeless, quality tunes that are designed to set the dancefloor on fire.

Opening up proceedings, Soft House Company "What You Need" (MM & AT Remix). Simply an iconic track from master Claudio Rispoli aka Moz- Art ,"What You Need" is probably the most perfect Italian piano House track ever made. Micky More & Andy Tee version is very respectful to the original, they added a bit of groove to make it more danceable and more tasty. “What You Need” was one of the top five house tracks in the sound of 1990 UK across fields and clubs. A sublime piece of House Music.

"Moody" by Micky More & Andy Tee on B SIDE is also a little classic on its own right, magic piano vibes with beautiful vocals and Rhodes chords. A must have record!

Last FM Information on So

There is more than one band with So as their name: 1) So began in 2002 with the pair of Eriko Toyoda and Markus Popp (Oval, Microstoria). So is a true symmetrical duo as both members equally contribute to the songwriting and processing. An absolute departure from Oval, So’s debut CD is a melodic, at times soothing, technological demonstration. The album was initially begun as a reworking of a song cycle from Eri’s archives. These archives are comprised of a vast collection of diverse materials she recorded in her parents’ house in Mito-City, Japan. Their sound represents a shift away from the dense, abrasion of Oval's ground-breaking Commers series, and instead moves towards more airy and organic tones. The inclusion of vocals - processed and natural - and live instrumentation allow for So's music to expand far beyond the constraints of the purely digital. Perhaps following formats will allow the listener to fully convey the peculiar and conflicting underlying personal and musical dynamics at work here. Despite the at times colorful, detailed and balanced musical presentation internally, So derives most of its momentum from constant confrontation with Markus and Eri’s conceptualizations and implementations of music. The actual collaborative process is more a resemblance of an 18th century naval battle than a convenience exercise in file sharing. Fundamentally different in countless respects, Oval recordings are linear and strategic on the planning board as well as in practice. So, however, lost the compass from the beginning and is a free project. Recording of the final version of So began in 2002 and is actually not yet finished. Being more of a "tech demo" it was worked on until ten minutes before the FedEx person came to pick up the CD-R. Vocal recordings and guitar were re-recorded directly into the PowerBook’s internal mic. Even though this CD is his most painstaking and complex work to date, Markus would like to see his contribution described as "art direction." Album artwork was created by Katsumi Yokota, the prolific Japanese illustrator who made contributions to the most experimental stages of the United Game Artist’s video game classic, Rez (released for Dreamcast and PS2 in 2002). There are no song titles as So finds it doesn’t make sense and is too much of a compromise to put English song titles to Japanese lyrics. So’s live performance will be a significant departure from any of Markus’ past shows. For these, Markus and Eri decided to build a completely customized, So Fi-PA-system. They will consist of two Triode amplifiers based on ancient schematics, rated at 6-8 Watts each as well as a set of homemade broadband speakers consisting of 1950s broadband speakers (from movie theaters) using an empty bottle as a quasi-backloaded Tractrix (Spherical) horn and mounted in plain cardboard boxes. The sound produced is very trashy and peculiar. Both the speakers and amps are somewhat large, but not super-rugged. They are entirely transportable. To Markus, going retro-HiFi seemed the most radical departure from Oval turning into a software engine. This custom PA will allow for concerts in cafes and galleries. Further details about this are available to any serious head upon request. 2) So was a British duo from the late 1980s that featured Markus Bell and Mark Long, who were previously members of a band called The Opposition. The duo were managed by Steve Weltman of Esta Management, and were contemporaries of acts such as Climie Fisher, Blue and Waterfront. Signing to Parlophone Records, they released singles such as "Are You Sure?" (UK charts #62, US #41) and "Would You Die For Me", as well as the album "Horseshoe In The Glove", produced by Walter Turbitt. The band toured as the opening act for Icehouse on the group's "Man Of Colours" U.S. tour. The video for the single "Are You Sure?" also received significant airplay on MTV, and still receives airplay years later on MTV's sister channel, Vh-1 Classic. "Are You Sure?" has appeared on many 80's new wave compilations, most notably on EMI's successful "Living In Oblivion" series. Read more on Last.fm. User-contributed text is available under the Creative Commons By-SA License; additional terms may apply.
FREE SHIPPING ON ORDERS OVER £100 TO UK MAINLAND ONLY
See exclusions
View Cart