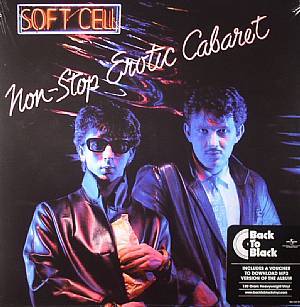 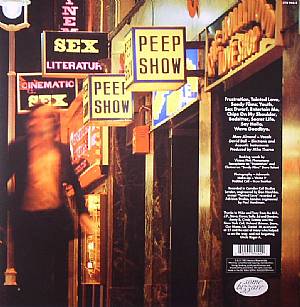 In the U.S., Soft Cell, the British duo of singer Marc Almond and instrumentalist David Ball, was a classic one-hit wonder, that hit being the remake of Gloria Jones' "Tainted Love," which dominated dance clubs and eventually peaked in the pop Top Ten with its synth-pop sound and Almond's plaintive vocal in 1981-1982. In the U.K., the group not only had a longer career, but also influenced a raft of similar performers. Non-Stop Erotic Cabaret, originally released in Britain in the fall of 1981, contained both the band's first hit and its follow-up, "Bedsitter," its title referring to what in America would be called a studio apartment. (A third U.K. Top Five hit, "Say Hello Wave Goodbye," emerged from the LP.) At full album length, lyricist Almond's primary preoccupation, only suggested in "Tainted Love," was spelled out; this was a theme album about aberrant sexuality, a tour of a red-light district. The point was well made on "Sex Dwarf," with its oft-repeated chorus "Isn't it nice/Sugar and spice/Luring disco dollies to a life of vice?" Songs like "Seedy Films," "Entertain Me," and "Secret Life" expanded upon the subject. The insistent beats taken at steady dance tempos and the chilling electronic sounds conjured by Ball emphasized Almond's fascination with deviance; it almost seemed as though the album had been designed to be played in topless bars. British listeners saw through Almond's pretense or were amused by him, or both; more puritanical Americans tended to disapprove, which probably limited the group's long-term success stateside. But the music was undeniably influential.

PLAY
CUE
MP3
a1
Frustration
a2
Tainted Love
a3
Seedy Films
a4
Youth
a5
Sex Dwarf
b1
Entertain Me
b2
Chips On My Shoulder
b3
Bedsitter
b4
Secret Life
b5
Say Hello, Wave Goodbye

Last FM Information on So

There is more than one band with So as their name: 1) So began in 2002 with the pair of Eriko Toyoda and Markus Popp (Oval, Microstoria). So is a true symmetrical duo as both members equally contribute to the songwriting and processing. An absolute departure from Oval, So’s debut CD is a melodic, at times soothing, technological demonstration. The album was initially begun as a reworking of a song cycle from Eri’s archives. These archives are comprised of a vast collection of diverse materials she recorded in her parents’ house in Mito-City, Japan. Their sound represents a shift away from the dense, abrasion of Oval's ground-breaking Commers series, and instead moves towards more airy and organic tones. The inclusion of vocals - processed and natural - and live instrumentation allow for So's music to expand far beyond the constraints of the purely digital. Perhaps following formats will allow the listener to fully convey the peculiar and conflicting underlying personal and musical dynamics at work here. Despite the at times colorful, detailed and balanced musical presentation internally, So derives most of its momentum from constant confrontation with Markus and Eri’s conceptualizations and implementations of music. The actual collaborative process is more a resemblance of an 18th century naval battle than a convenience exercise in file sharing. Fundamentally different in countless respects, Oval recordings are linear and strategic on the planning board as well as in practice. So, however, lost the compass from the beginning and is a free project. Recording of the final version of So began in 2002 and is actually not yet finished. Being more of a "tech demo" it was worked on until ten minutes before the FedEx person came to pick up the CD-R. Vocal recordings and guitar were re-recorded directly into the PowerBook’s internal mic. Even though this CD is his most painstaking and complex work to date, Markus would like to see his contribution described as "art direction." Album artwork was created by Katsumi Yokota, the prolific Japanese illustrator who made contributions to the most experimental stages of the United Game Artist’s video game classic, Rez (released for Dreamcast and PS2 in 2002). There are no song titles as So finds it doesn’t make sense and is too much of a compromise to put English song titles to Japanese lyrics. So’s live performance will be a significant departure from any of Markus’ past shows. For these, Markus and Eri decided to build a completely customized, So Fi-PA-system. They will consist of two Triode amplifiers based on ancient schematics, rated at 6-8 Watts each as well as a set of homemade broadband speakers consisting of 1950s broadband speakers (from movie theaters) using an empty bottle as a quasi-backloaded Tractrix (Spherical) horn and mounted in plain cardboard boxes. The sound produced is very trashy and peculiar. Both the speakers and amps are somewhat large, but not super-rugged. They are entirely transportable. To Markus, going retro-HiFi seemed the most radical departure from Oval turning into a software engine. This custom PA will allow for concerts in cafes and galleries. Further details about this are available to any serious head upon request. 2) So was a British duo from the late 1980s that featured Markus Bell and Mark Long, who were previously members of a band called The Opposition. The duo were managed by Steve Weltman of Esta Management, and were contemporaries of acts such as Climie Fisher, Blue and Waterfront. Signing to Parlophone Records, they released singles such as "Are You Sure?" (UK charts #62, US #41) and "Would You Die For Me", as well as the album "Horseshoe In The Glove", produced by Walter Turbitt. The band toured as the opening act for Icehouse on the group's "Man Of Colours" U.S. tour. The video for the single "Are You Sure?" also received significant airplay on MTV, and still receives airplay years later on MTV's sister channel, Vh-1 Classic. "Are You Sure?" has appeared on many 80's new wave compilations, most notably on EMI's successful "Living In Oblivion" series. Read more on Last.fm. User-contributed text is available under the Creative Commons By-SA License; additional terms may apply.

Cell is the name of at least seven artists: 1) Alex Scheffer - Popular tags: ambient, chillout, downtempo, electronic, psychill. 1984 saw Alex entering the world of machines. Aged 10 he received his first machine from his mother and father, respectively pianist and drummer, a Juno 106 Roland. At that time, student at the Conservatoire, he started looking at LFOs and filters. His favourite instruments remain keyboards and especially the piano, an instrument which he will get back to at 13 when entering the Jazz section at the Conservatoire of Chambéry (73). EXTENDED BIO CONTINUED BELOW, AFTER THOSE OF OTHER ARTISTS... 2) Cell - Brian Fabiano - Cell started in 2006 as a challenge to recreate and understand Industrial music. Along the way vocals were written, followed by instrumentals and eventually entire songs. In mid 2009 we were contacted by Matt Russel of Gain Structure studios and produced our first EP "Stop This" which is available on iamcell.com through various online sources. We are currentlly in the studio recording our first full length album, and intend on documenting the process online during the process. 3) Cell was a rock quartet formed in the early 1990's in New York City which featured Dave Motamed (formerly of Das Damen and later of 2 Dollar Guitar) on bass, vocalist/lead guitarist Jerry Dirienzo (later of Ugly Beauty), guitarist/vocalist Ian James (formerly of Flower and later of French), and drummer Keith Nealy. EXTENDED BIO CONTINUED BELOW, AFTER THOSE OF OTHER ARTISTS... 4) The Japanese band Cell is a 2 man group with Hiro on vocals and Taka on guitar. They’re heavily influenced by groups such as Zi-kill, 黒夢 and ジュラシック. Their music is available at Muzie, http://www.muzie.co.jp/cgi-bin/artist.cgi?id=a011578 . 5) Alternative Metal / Rapcore band from South Auckland, Auckland, New Zealand. http://www.myspace.com/cellnz 6) Cell is a black metal band formed in Winnipeg, Manitoba in 2014. 7) Cell is an hardcore punk band from Montreal, Quebec and put out their first recording in 2017. 1) Alex Scheffer, continued: His growing interest for machines and electronic music enticed him to listen to artists such as Kraftwerk, Tangerine Dream, Pink Floyd, John Cage, Peter Gabriel… Convinced that a fusion of styles is fundamental, Alex decided at 16 to look into Pop-Electro fusion. He took part in several bands as keyboard player and arranger, his main function being to mingle and mix electronic sounds into Pop-Rock atmospheres. After his Acoustic Engineer studies, Alex definitely made a turn towards electronic music. While collaborating with different directors he got to carry out all types of orders. Original soundtracks for advertising, short films, catwalk and even contemporary dance for which he wrote more than an hour of music. Formerly reviewer for Claviers Magazine, for which he wrote the « Hardware » trials and the « Vintage » column, he currently works as a teacher in a Sound School, training future engineers to different techniques such as sound synthesis, sound design and use of machines. The several remix queries and collaborations with DJs turned Alex Scheffer into a many-faceted composer, able to create as much for dance-floors as for intimate or mental atmospheres… Convinced that an electronic music composer must touch all styles to be complete, he passionately gives himself over to researching new sounds and atmospheres… 3) Cell, early 1990's New York City rock quartet , continued: The band formed in 1991 and was quickly signed to Thurston Moore's label Ecstatic Peace who released their first single. A few months later they signed with Germany's City Slang label to record their first album, Slo-Blo, which led to the band's signing with DGC records in the US. Cell toured the world several times with Sonic Youth, Pavement, Sugar and many others, including a stint on the Lollapalooza second stage in 1993 with Royal Trux. They also had two music videos aired on MTV's 120 Minutes several times. The band broke up after touring for their second album, Living Room, in 1995. Read more on Last.fm. User-contributed text is available under the Creative Commons By-SA License; additional terms may apply.
FREE SHIPPING ON ORDERS OVER £100 TO UK MAINLAND ONLY
See exclusions
View Cart