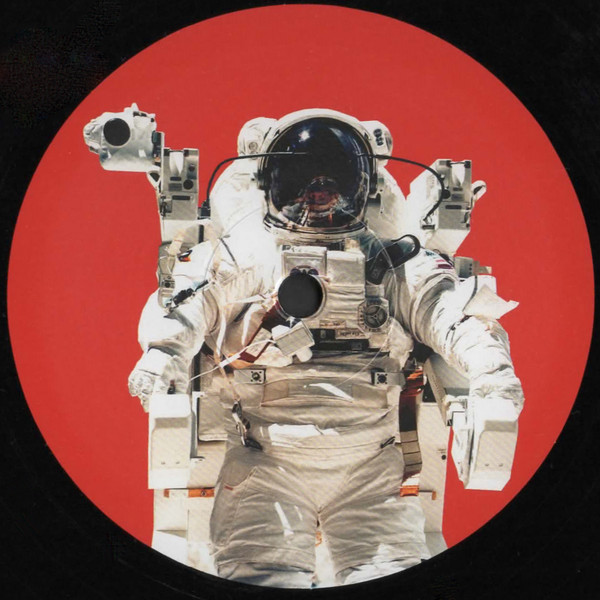 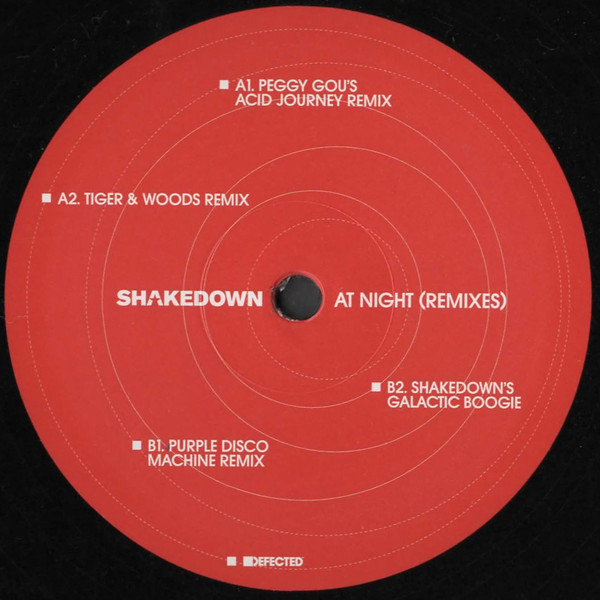 Simply an iconic track from Swiss brothers Mandrax and Seb K aka Shakedown, ‘At Night’ is one of the most recognisable house tracks of the last two decades. With one of the most-hyped remixes of the year, artist of the moment Peggy Gou delivers with a squelching 7 minute groover, bringing in that iconic synth motif to lift the production and keep it rolling. Stepping up to tackle this masterpiece with a nu-disco dance track, Tiger & Woods use cowbell to accent a B-boy beat, with drum machine breaks bringing it back to the dancefloor. With a sophisticated house remix with a nu-disco edge is Purple Disco Machine, fusing a funk-infused bassline with Terra Deva’s unforgettable vocals. Finally is a brand new version from the Shakedown duo themselves, the Galactic Boogie Mix. With saturated synths and interplanetary breakdowns, Shakedown bring a carefree 80s quality to this iconic track’s irresistible after-dark charm.

The Swedish-Swiss dance act made up of Mandrax and Seb K, best known for the hit "At Night". By the time they started Shakedown in 1999, Mandrax and Seb K. already had a good idea of each other’s musicality: they’re brothers, blending Swiss and Swedish backgrounds. Stephan Mandrax is no newcomer to electronic music. Initially a fan of new wave and punk (making his 1984 DJ debut in a rock club), house music found him in 1986. Stephan moved to New York in 1992, starting the labels Liquid Groove and Boombastic and producing records with the legendary Mike Delgado. In late 1999, he returned to Switzerland to set up a new home and a new studio. Over the last decade his ear, his understanding of the dancefloor and his skills in the booth have seen him consistently booked for the world’s best nights. After a stint studying and working as a sound engineer in London (1993-1996), Seb K returned to Switzerland, starting the Bel-Air Project (1997-1998) and the label Cornflex. In 1998 he released a series of well-received 12”s including the highly-regarded "Dark Jazzor," whose overall sound, though genre-defying, leant towards funky and experimental drum 'n' bass. Recognising they had developed complementary sets of skills, the two brothers formed Shakedown. They started working together by producing tracks for other artists before beginning to record "You Think You Know" with artists such as Pookie and vocalist Terra Deva. After a year of recording sessions in New York City and Lausanne the record was released at the end of 2001 on Naïve/Sony/Defected. Featuring fresh blends of electro-house, and something that could be listened to from the living room to the dancefloor, “You Think You Know” included the huge hit and critically acclaimed “At Night”. “At Night” became a 2002 dance anthem, crossing over to national charts and peaking in the UK at 6th place with an appearance on Top Of The Tops, a first for Swiss musicians (long used to living in relative obscurity). Despite the huge demands success placed on the brothers’ time, Shakedown showed no signs of stopping. Their work has been steadily refined, with the tempo of their music becoming more personal, more confident. In a space of their own making, somewhere between electro, house, pop and rock, the two brothers have built a sound that is very much their own, as evidenced by their continued productions. The single “Lovegame” (released in 2003 on the Kitsuné Love compilation); remixes for Mirwais (“I Can’t Wait”), Mousse T (“Fire” and “Cos I’m Cool”), Royskopp (“Eple”) and Les Rhythmes Digitales (“Jacques your body”); a track produced for and co-written with Bootsy Collins for his latest release (“Funky and You Know It”) and others for the band “Rinocerose”: all have showed that Mandrax and Seb have continued to blossom as artists. Also demonstrating widespread appreciation for the sound the brothers have created, Shakedown’s tracks have also been used in the films “The Transporter 2” by Louis Letterrier and “ Les Corps Impatients” by Xavier Gianolli. Now, having spent more than two years working in the studio, Shakedown is ready to share its latest creation : “Spellbound “. The new album features carefully crafted arrangements whose combination of synthetic sounds and organic movements is reminiscent of cold-wave or electronica but ends up in an entirely new place. The beats and dynamics are inspired by the electronic music of clubland, but added to them is a surprising and sometimes melancholic songwriting, expressed by the voices of Dacia Bridges, Mark Kelly and Terra Deva. The songs flow from the album’s beginning to end, part of a journey that will remind the listener of classic electronica from The Cure first albums (“Lonely Road”) to Massive Attack (“Emerald Eyes “) in addition to the music of Ennio Morricone (“ Spellbound “) but without forgetting the dancefloor (“Fantasy”). Read more on Last.fm. User-contributed text is available under the Creative Commons By-SA License; additional terms may apply.
FREE SHIPPING ON ORDERS OVER £100 TO UK MAINLAND ONLY
See exclusions
View Cart