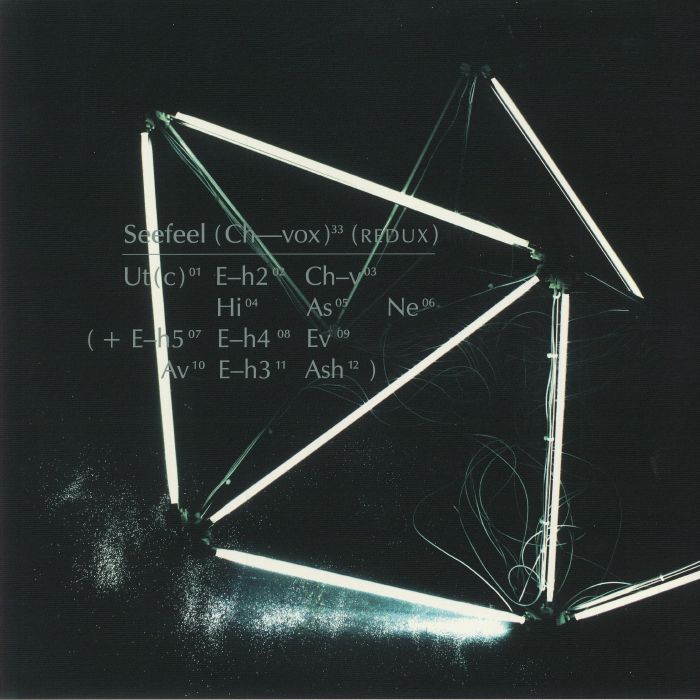 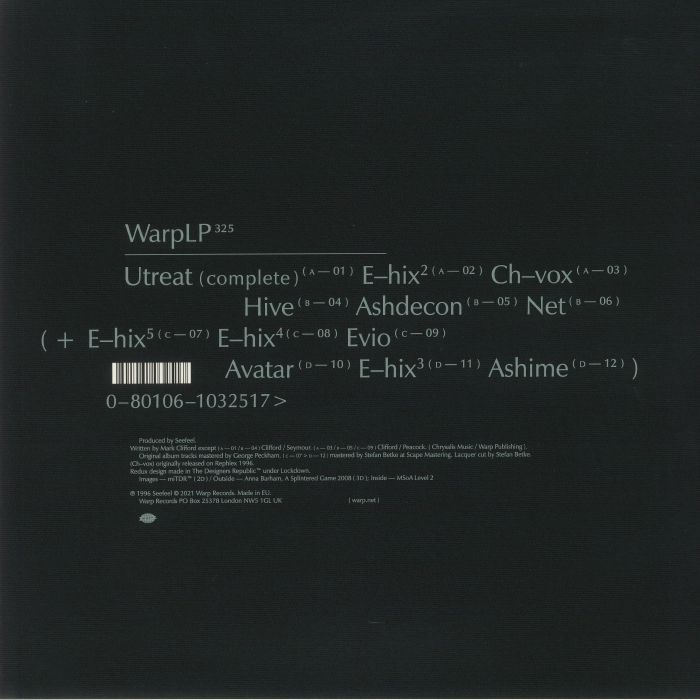 - NEW RELEASE
Sorry, this item is currently unavailable.
ARTIST:
Seefeel
TITLE:
Ch Vox (Redux)
LABEL:
Warp
CATNO:
WARPLP325
STYLE:
IDM /
FORMAT:
Vinyl record
DESCRIPTION:
2x12" IDM & Experimental - Seefeel’s third studio album was recorded for Richard D James and Grant Wilson-Claridge’s Rephlex label, as as a return favour for two remixes Aphex Twin (a huge fan of the group) did in their Too Pure period. This is the first time it has been available on vinyl since 1996 and adds an extra LP of bonus material, mastered from original DAT transfers by Stefan Betke aka Pole. Comes housed in a new gatefold sleeve by the Designers Republic.

“Mark Clifford and his mates have moved through labels like Astralwerks and Warp before landing at the front door of the Richard James label Rephlex, and along the way they have scattered some wonderful pearls. For (CH-VOX), it's an especially lush match of aesthetics -- sort of a condensed version of the Aphex Twin landmark record, Selected Ambient Works II. Picking up at the tail end of Seefeel's last album, Succour, we once again hear "Utreat," a dark meditation of phrases that makes Darren Seymour's bass sound like an electric piano, or is it Clifford's electric piano that sounds like a bass? Sarah Peacock's dreamy vocals hover almost out of earshot, and possibly her guitar is plugged in somewhere, too.

It's difficult to say with many of their songs what instrument we're hearing, since treatments and effects play such a major role in production. The song "E-HIX2" breathes like a cluster of bleak skyscrapers with an extremely ambient take on feedback, and the title cut, "CH-VOX," is stark, patient, and ominous -- an abandoned submarine frozen in ice. "Hive" (with wonderful vocal loop effects) has Clifford revisiting his somewhat limited palette of percussion -- a piece that teeters between beauty and agitation, and an unfortunate weak spot for the album. The album closes with "Net," which is nothing short of masterpiece -- a journey, a drive through wet streets at midnight, and a finale so captivating you'll want to hear it twice -- somewhat postponing the disappointment that the album is only 33 minutes long.”

Seefeel formed during 1992 in London, England, when guitarist Mark Clifford and drummer Justin Fletcher met vocalist Sarah Peacock and bassist Darren Seymour. They released their first EPs on the Too Pure label in 1993. Stylistically situated at the intersection of dream pop/shoegaze and ambient electronic/IDM, their music has a distinctive sound. This might have contributed to the band getting a contract with the seminal electronic label Warp Records in 1994. Since 1996, the band went on an open-ended hiatus which ended in 2008 when the band partially reformed (with DJ Scotch Egg filling in for Daren Seymour on bass and former Boredoms drummer E-Da filling in for Justin Fletcher). They released their self-titled album in 2011 on Warp. Its members have continued to release new material under different aliases. In 1996, Scala was formed by Justin Fletcher, Daren Seymour and Sarah Peacock together with Mark van Hoen. Mark Clifford has been releasing solo work since 1995 as Disjecta and Woodenspoon, and formed Sneakster with Sophie Hinkley in 1999. Currently Mark is running the Polyfusia label, releasing old and new work including collaborations with Autechre and Mira Calix. Most recently, Seefeel have done two remixes, one for Maximo Park (on the Warp20 Recreated compilation) and one for School of Seven Bells (on the My Cabal EP). Read more on Last.fm. User-contributed text is available under the Creative Commons By-SA License; additional terms may apply.
FREE SHIPPING ON ORDERS OVER £100 TO UK MAINLAND ONLY
See exclusions
View Cart