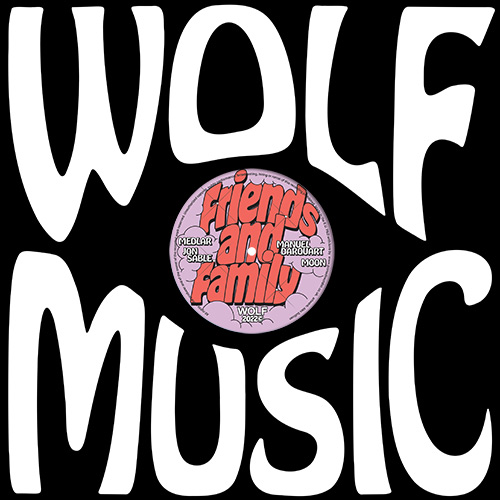 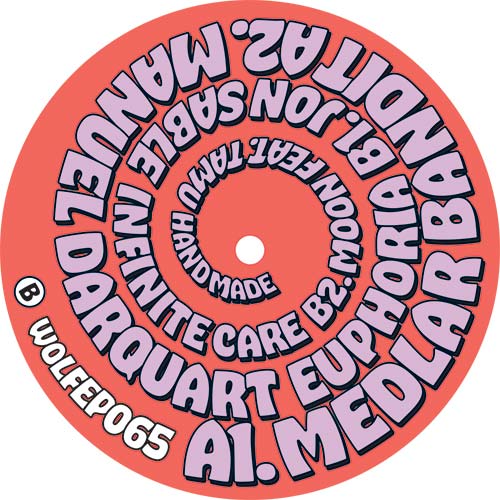 WOLF OG, man like Medlar kicks it off in signature style with 'Bandit', a heads-down, techno-tinged trip. Machine music with the soul of south London. Next, professor of the dark arts, Manuel Darquart, conjures up the aptly named 'Euphoria' a deep, ‘90s leaning house excursion, synth wizardry and all, that works just as well as a sunset cruiser, as it does an end of the night closer.

On the flip, two long time listeners, first time callers, with a double dose of debuts on the label. Jon Sable takes the B1 with 'Infinite Care', offering up that trademark strong and Sable, In Dust We Trust flavour. Deep, emotive, intricate house with a nod to the worlds of Bruk and Chicago house melded together with that NZ feel.

Closing it out, debut number two comes in the form of rising star moon who lays down a beatsy, broken earworm ‘Handmade’ featuring some dreamy bars from Tamu.

Full crew, through and through – this one hits different!

There is more than one artist called Jon: 1. ジョン（犬）: Jon a mysterious woman from Japan known simply as Jon. Her strange childlike vocals and pump organ charm and enthrall on their own terms; Jon's fresh approach can't be compared to anything you've ever heard before. Primitive, melodious, captivating and completely unforgettable. 2. Jon is a singer from Denmark who became famous in the reality show "Popstars". Known as Jon Nørgaard. 3. Jon. His music was born from a love of electronic sounds, from keyboards and computers. He crafts a well written and thoughtful tune with and edge of harsh reality, that is whisked away into a timeless space of surreal beauty. 4. Jon. UK-based singer-songwriter playing under the name Hiawatha Telephone Company 5. Jon is a DnB enthusiast who uses FL Studio to make DnB songs, and posts them on his site http://epyks.net Read more on Last.fm. User-contributed text is available under the Creative Commons By-SA License; additional terms may apply.
FREE SHIPPING ON ORDERS OVER £100 TO UK MAINLAND ONLY
See exclusions
View Cart