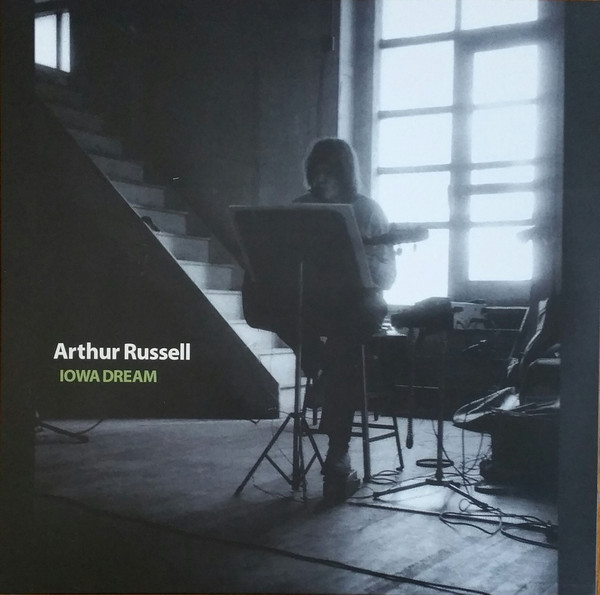 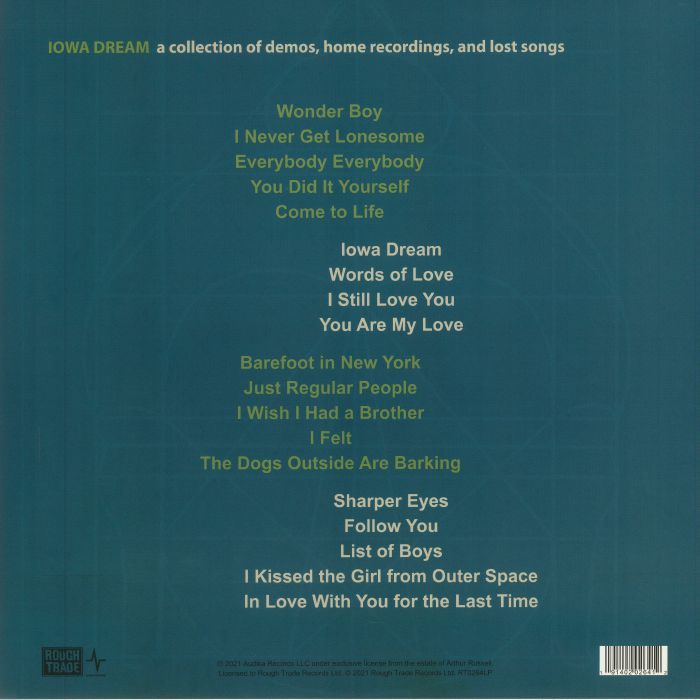 - NEW RELEASE
Sorry, this item is currently unavailable.
ARTIST:
Russell, Arthur
TITLE:
Iowa Dream
LABEL:
Rough Trade
CATNO:
RT0264LP
STYLE:
Folk / Folk Rock / Rock /
FORMAT:
Vinyl record
DESCRIPTION:
2x12" Repress of 2018 LP - Rock, Folk - At once kaleidoscopic and intimate, "Iowa Dream" bears some of Russell’s most personal work, including several recently discovered folk songs he wrote during his time in Northern California in the early 1970s. For Russell, Iowa was never very far away. “I see, I see it all,” sings Russell on the title track: red houses, fields, the town mayor (his father) streaming by as he dream-bicycles through his hometown. Russell’s childhood home and family echo, too, through “Just Regular People,” “I Wish I Had a Brother,” “Wonder Boy,” “The Dogs Outside are Barking,” “Sharper Eyes,” and “I Felt.” Meanwhile, songs like “I Kissed the Girl From Outer Space,” “I Still Love You,” “List of Boys,” and “Barefoot in New York” fizz with pop and dance grooves, gesturing at Russell’s devotion to New York’s avant-garde and disco scenes. Finally, the long-awaited “You Did it Yourself,” until now heard only in a brief heart-stopping black-and-white clip in Matt Wolf’s documentary Wild Combination, awards us a new take with a driving funk rhythm and Russell’s extraordinary voice soaring at the height of its powers. On "Iowa Dream", you can hear a country kid meeting the rest of the world - and with this record, the world continues to meet a totally singular artist.

Arthur Russell (May 21 1951 - April 4, 1992) was a prodigious talent. Classically trained on cello while growing up in Oskaloosa, USA, Arthur studied with Ali Akbar Khan in San Francisco in the early 1970's. During this period he also collaborated with Allen Ginsberg, accompanying him on cello while Ginsberg read or sang. Russell also spent time in a Buddhist commune in California; he left when they decided to collectivize his cello. By the mid-1970's Russell relocated to New York City, where he studied at The Manhattan School of Music. He formed a band from 1975-1979, The Flying Hearts, recorded by John Hammond and featuring David Byrne, Rhys Chatham, Jon Gibson, Peter Gordon, Jerry Harrison, Garret List, Frank Pagano, Andy Paley, Leni Pickett, and Peter Zummo. In the late 1970s Russell became enamored with the disco scene in New York. At the time it represented a liberation force, particularly for the gay scene, just a few years after the Stonewall riots. (For more see "Turn the Beat Around: The Secret History of Disco" by Peter Shapiro). 'Kiss Me Again' was Russell's first dance track. Released under the name Dinosaur L by Sirerecords, it was to be the first of many innovative dancefloor tracks released under different names and with different collaborators, such as 'Is It All Over My Face' by Loose Joints, released in 1980. In 1982, Arthur Russell and William Socolov founded Sleeping Bag records and their first release was his 24-24 Music. This featured 'Go Bang' which was re-mixed as a 12" single by Francois Kevorkian. Arthur Russell continued to release dance singles such as 'Tell You Today' (4th and Broadway, 1983) an upbeat dance groove featuring the vocals of Joyce Bowden . 'Wax the Van' (Jump Street, 1985) with vocals by Lola Blank, wife of notorious BobTreehouse aka Bob Schoolbell (Sleeping Bag, 1986) and 'Let's Go Swimming' (Upside / Rough Trade, 1986). At the same time, he produced more meditative works on the albums 'Tower of Meaning' (Chatham Square, 1983) and 'World of Echo' (Rough Trade, 1986), which presented many of his pop and dance compositions in solo cellist form. Arthur Russell died of AIDS on April 4, 1992, at the age of 40. The obituary in the Village Voice wrote: "his songs were so personal that it seems as though he simply vanished into his music." In 2004 a renewed interest in Arthur Russell saw the release of "The World of Arthur Russell" on Soul Jazz records, which compiled his best-known dance hits alongside more introspective love songs such as "Little Lost" and "Keeping Up". In the same year Audika records reissued "World Of Echo" and produced "Calling Out Of Context", 12 unreleased songs from 1985-90. The songs were taken from an album "Corn", recorded in 1985 but never released. They showcase a set of visionary pop songs years ahead of their time, minimalist and expansive, evidence that Russell's best work was perhaps never realized before his death. In 2006 Audika released "First Thought Best Thought", compiling Russell's out of print orchestral and instrumental works with previously unreleased material. Read more on Last.fm. User-contributed text is available under the Creative Commons By-SA License; additional terms may apply.
FREE SHIPPING ON ORDERS OVER £100 TO UK MAINLAND ONLY
See exclusions
View Cart