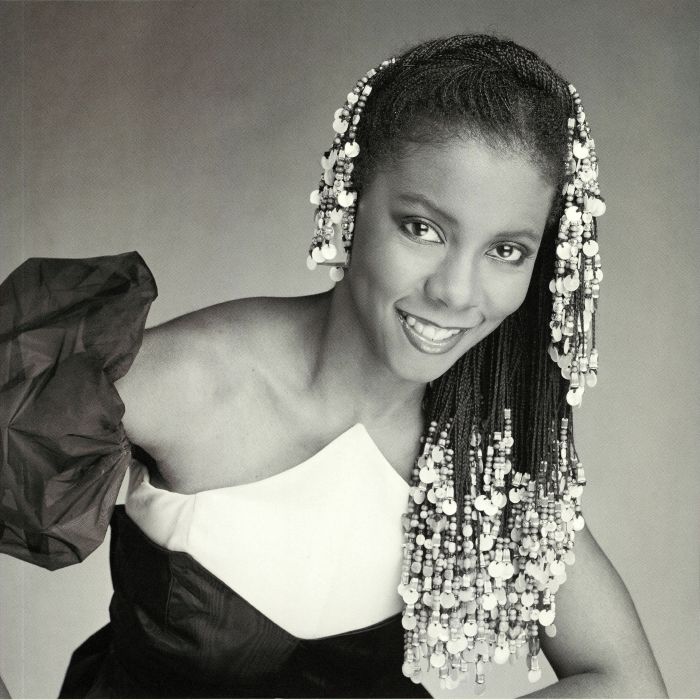 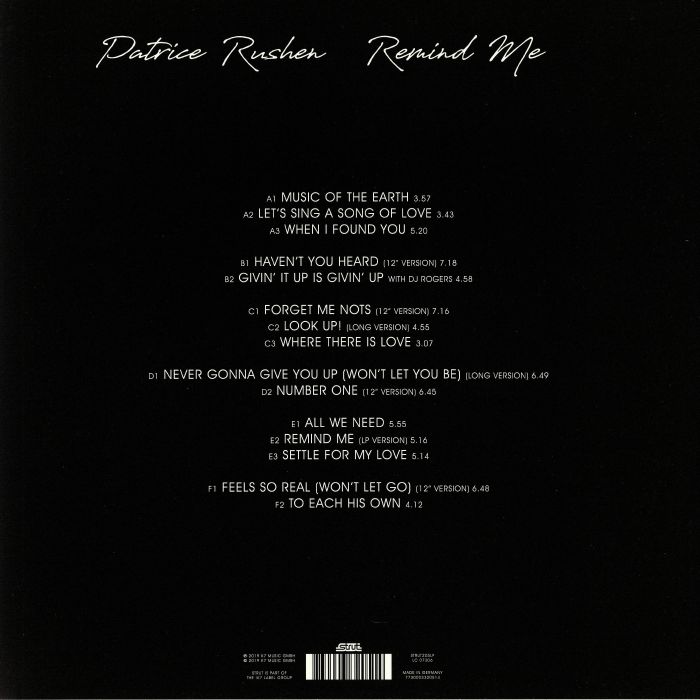 - NEW RELEASE
Sorry, this item is currently unavailable.
ARTIST:
Rushen, Patrice
TITLE:
Remind Me (The Classic Elektra Recordings 1978-1984)
LABEL:
Strut
CATNO:
STRUT205LP
STYLE:
Disco / Disco / Soul / Soul / Jazz / Jazz /
FORMAT:
Vinyl record
DESCRIPTION:
3x12" Collecrtion Of Hits - Disco , Soul, Dance - "Sophisticated dance music." That's how Patrice Rushen describes the music she and her contemporaries were making in the late '70s when she was signed to Elektra Records. The label was looking to flesh out its new pop/jazz division and Rushen, 23 years old and already a virtuoso jazz pianist and arranger, was ready to add pop to her expanding repertoire of musical styles. She explained her shift from technical jazz to pop in her appearance on Soul Train, saying she saw music's turn toward "getting back to the groove again," with the kind of dance-oriented rhythms and gyrating basslines of '60s funk getting new life at the dawn of the '80s.

Always the prolific composer, Rushen released five albums in her seven years at Elektra. A selection of these recordings have been rereleased on Remind Me: The Classic Elektra Recordings 1978-1984. The compilation features more than 90 minutes of Rushen's most radio-friendly R&B. Like her mentor, Quincy Jones, another multi-instrumentalist who burst into pop from the world of jazz, she used her skills to seek out the best collaborators to bring her compositions to life. With many of her songs calling for a full brass ensemble on top of percussion, backing vocals and the works, many pieces list over a dozen collaborators. Unlike Quincy, she was also the voice and the face of her own songs. It was on Patrice, the first album released by Elektra in 1978, that Rushen introduced her voice. "Music Of The Earth," originally released on Patrice and the first track on Remind Me, is a successful balancing act between Rushen's breezy doo-wopping, an indelibly funky guitar and a brassy melody. Rushen leaned further into pop with her 1979 release, Pizzaz, with catchy hooks and plenty of handclaps on highlights like "Haven't You Heard."

The '80s brought a marked difference in Rushen's sound, aligning with a wave of change for dance music at large. Synthesizers had been used since the '60s, but it was the dance music frenzy of the '80s that saw synths used in every recording studios. "I was looking at different ways to experiment with the sounds on my records. We now had synths readily available, which widened the palette and colours available to us," says Rushen, who often refers to music in chromatic terms. Straight From The Heart, released in 1982, features liberal use of synthesizers, always at the hands of Rushen herself. It's the album that propelled her into the limelight, earning her two Grammy nominations for "Forget Me Nots" and "Number One," both of which appear on this compilation. Despite not being universally loved upon release (neither secured the Grammy, and Village Voice critic Robert Christgau wrote it off with casual misogyny, referring to the work and artist alternatively as "one dancey vamp" and "nouveau ingenue"), this work has aged remarkably well. "Forget Me Nots" was heavily sampled by Will Smith on the theme song for 1997's Men In Black. Having your song hijacked by Smith and a CGI alien might feel like a blow to sophistication, but her repertoire outshines it. The compilation's dance tunes overshadow the slow jams, and these dance tracks—without a shred of irony—still slap.

Some fans insist Rushen would have reached Prince levels of fame had she continued making pop albums (she knew Prince personally, but the comparison also refers to their respective positions as musical auteurs). She notes that "it is very gratifying to have a hit, but much more gratifying when that song is based upon true feelings and personal satisfaction." After leaving Elektra in 1984, Rushen stepped away from the Billboard 100 spotlight, going back to jazz and beginning a university teaching career that continues to this day. But Rushen's pop culture reach extends further than her time at Elektra, as well as beyond Men In Black. "Remind Me," which lends its title to this compilation, also off of Straight To The Heart, has been sampled almost 100 ti

Keyboardist/singer/songwriter/arranger/musical director Patrice Rushen has had an outstanding career with several Top Ten R&B hits, including "Haven't You Heard," "Forget Me Nots," "Feels So Real," and "Watch Out." Arguably she has received much of her popularity through other acts copying or sampling her material. "Forget Me Nots" was the basis of Will Smith's "Men in Black" from the blockbuster movie of the same name on Big Willie Style and George Michael extensively used the same track for his hit 'Fastlove'. R. Kelly's "Remind Me" was sampled from her "You Remind Me," a popular radio-aired LP track from Straight From the Heart. Others who have sampled Rushen's music include Def Jeff (Rushen's "Hang It Up") Zhane ("Groove Thang") and a dance act called Daddy's Favourite who remade 'Haven't you heard' into a track called "I Feel Good Things For You". Born September 30,1954, in Los Angeles, CA, Rushen's parents enrolled her in music classes at U.S.C. when she was three. In her teens, she won a solo competition at the 1972 Monterey Jazz Festival. The attention garnered from this earned her a contract with Prestige Records. After recording three albums and becoming an in-demand session player, Rushen signed with Elektra Records in 1978. Forging an engaging jazz/R&B/funk fusion, she regularly hit the R&B charts. Her five albums for the label were Patrice, Pizzazz, Posh, Straight From the Heart, and Now. Some of these sides can be found on Haven't You Heard:The Best of Patrice Rushen. In 1993, Rushen signed with Disney's Hollywood Records. Her first and only release was the excellent Anything but Ordinary, which yielded the inspiring single "My Heart, Your Heart." Hollywood wasn't satisfied with the album and shelved it. Sindrome Records bought the rights to the album and reissued it with the single, and some LP tracks received airplay on R&B and smooth jazz radio stations. Rushen became a member of the jazz collective the Meeting, appearing on several releases. Her busy schedule includes session dates and being the musical director for several different tours and TV specials. 1997's Signature found Rushen returning to her jazz roots for this solid album of instrumentals. In fall 2000, Patrice Rushen appeared as a part of Sisters Being Positively Real, an act on Brown Baby Entertainment Group. is an American jazz pianist and R&B singer. She is also a composer, record producer, multi-instrumentalist, songwriter, and music director. Her 1982 single, "Forget Me Nots", received a Grammy Award nomination for Best Female R&B Vocal Performance. Rushen had great success on the R&B and dance charts. "Haven't You Heard" went number 7 on the R&B charts, with "Forget Me Nots" as her only top 40 pop hit in the United States. Rushen is the elder of two daughters born to Allen and Ruth Rushen.[1] In her teens, she attended south LA's Locke High School and went on to earn a degree in music from the University of Southern California.[2] Rushen married Marc St. Louis, a concert tour manager and live show production specialist,[3] in 1986.[4] They have one son Cameron.[4][5] Her nickname is "Babyfingers," a reference to her small hands. In 2005, Rushen received an Honorary Doctorate of Music degree from Berklee College of Music.[6] She has been a member of jazz fusion band CAB.[7] Her song "Hang it Up" was featured on the 2005 video game Fahrenheit.[8] Read more on Last.fm. User-contributed text is available under the Creative Commons By-SA License; additional terms may apply.
FREE SHIPPING ON ORDERS OVER £100 TO UK MAINLAND ONLY
See exclusions
View Cart