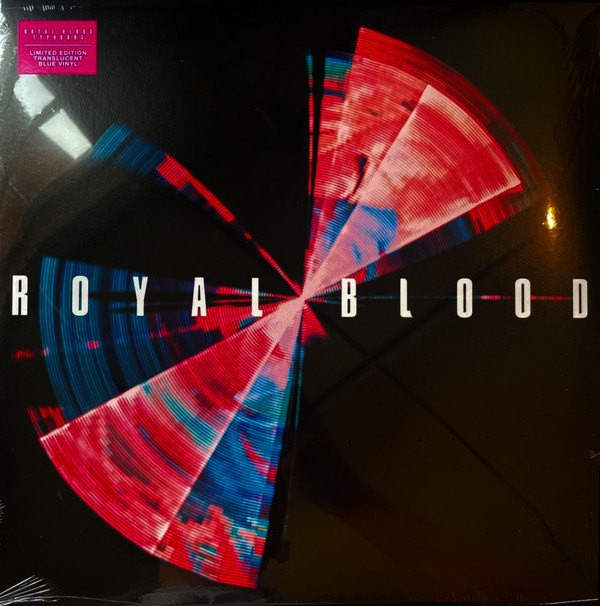 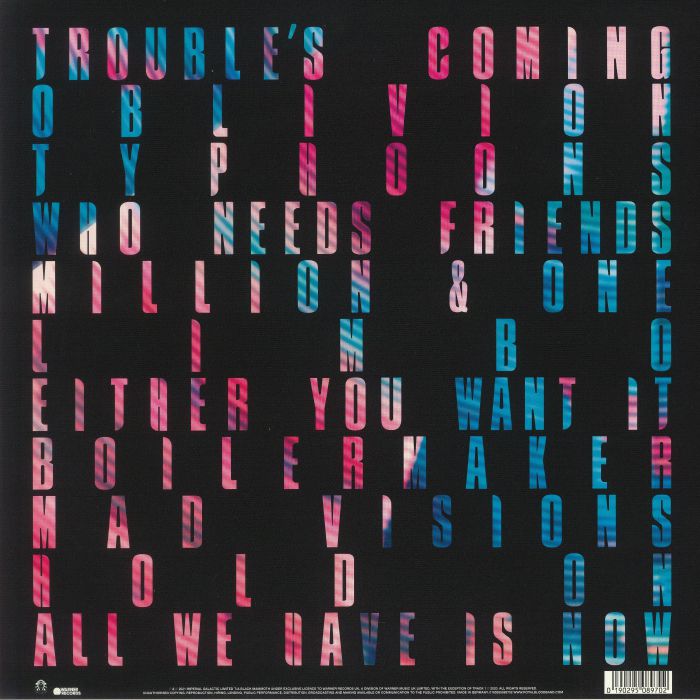 - NEW RELEASE
Sorry, this item is currently unavailable.
ARTIST:
Royal Blood
TITLE:
{Blue] Typhoons
LABEL:
Warners
CATNO:
0190295089672
STYLE:
Rock /
FORMAT:
Vinyl record
DESCRIPTION:
Rock - Pressed on Ltd Editoion Translucent Blue Vinyl For RSD Indie Shops, only. v‘Typhoons’ is the third LP by Royal Blood. They're say that this is a rock record with a difference - namely the influence of big-beat dance acts such as Justice, Cassius and Daft Punk. So not actually that different then. Some punchy production from Josh Homme, Paul Epworth and the duo themselves makes 'Typhoons' all that one might expect it to be.

After two UK #1 albums, 2 million album sales and an array of international acclaim, you might’ve thought you knew what to expect from Royal Blood. Those preconceptions were shattered when they released ‘Trouble’s Coming’ last summer. Hitting a melting pot of fiery rock riffs and danceable beats, they delivered something fresh, unexpected and yet entirely in tune with what they’d forged their reputation with.

The reaction was phenomenal, with highlights including 20 million streams, a premiere as Annie Mac’s Hottest Record and a run on Radio 1’s A-list and earned alternative radio support and media attention across the globe. In short, Royal Blood are primed to be bigger than ever before. That feat is set to be realised when they release their eagerly anticipated third album ‘Typhoons’ on April 30th via Warner Records.

When Mike Kerr and Ben Thatcher sat down to talk about making a new album, they knew what they wanted to achieve. It involved a conscious return to their roots, back when they had made music that was influenced by Daft Punk, Justice, and Philippe Zdar of Cassius. It also called for a similar back-to-basics approach to what had made their self-titled debut album so thrilling, visceral and original.

“We sort of stumbled on this sound, and it was immediately fun to play,” recalls Kerr. “That’s what sparked the creativity on the new album, the chasing of that feeling. It’s weird, though - if you think back to ‘Figure it Out’, it kind of contains the embryo of this album. We realised that we didn’t have to completely destroy what we’d created so far; we just had to shift it, change it. On paper, it’s a small reinvention. But when you hear it, it sounds so fresh.”

Those traits pulsate throughout the new single and title track. Kerr’s spiralling bass riff casts an hypnotic allure as it grows in intensity, while his vocals switch at will between a raw rock roar and a soulful falsetto. It’s underpinned by Thatcher’s thundering beats, his taut rhythms infused with groove-laden hi-hats.

After setting the tone with ‘Trouble’s Coming’, the album opens in breathless, take-no-prisoners style with the fierce metallic grooves of ‘Who Needs Friends’ hitting an early visceral peak. Royal Blood further reference their fresh array of influences by deploying vocodered vocals on ‘Million & One’ before dynamically switching between the biggest contrasts of their sound with ‘Limbo’. Already a fan favourite having been a regular during the duo’s 2019 shows, ‘Boilermaker’ lives up to its reputation and is more than matched by ‘Mad Visions’, which evokes a hyper-aggressive Prince. It ends with a final surprise in the shape of the stark piano ballad ‘All We Have Is Now’, a vulnerable and revealing reminder to live in the moment.

That song’s unguarded sentiments gives the album a redemptive finale. Whether directly or allusively, the album focuses on exploring the flipside of success that they’ve experienced. It comes from the realisation that success is much more complicated than it seems and that having the time to regain perspective is a precious commodity which becomes ever more elusive. The situation called for reflection and change, which Kerr addressed in Las Vegas. He downed an espresso martini and declared it to be his last drink, and soon discovered that his new-found sobriety would have a positive impact upon his creativity and life as a whole.

That new approach manifested itself in the duo’s decision to produce the majority of ‘Typhoons’ themselves. ‘Boilermaker’ was produced by

Formed at the beginning of 2013, Royal Blood is a 2-piece band from Brighton, East Sussex, UK. Having known each other for years in different bands, Mike Kerr (Bassist/Vocalist) & Ben Thatcher (Drums) finally came together and went into the studio to record ‘Figure It Out’ – the first track that brought attention to the band. At the tail end of 2013, Royal Blood released ‘Out of The Black’, their debut single on Black Mammoth Records. The band released their debut album ''Royal Blood’' on 22 August, 2014 which sold 66,000 copies in its first week. Read more on Last.fm. User-contributed text is available under the Creative Commons By-SA License; additional terms may apply.
FREE SHIPPING ON ORDERS OVER £100 TO UK MAINLAND ONLY
See exclusions
View Cart