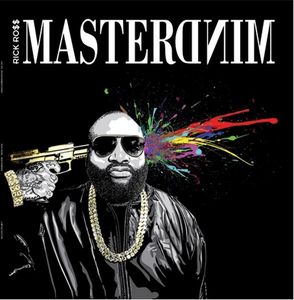 Not one to evolve at any rate above a snail's pace, Miami rapper Rick Ross is gloriously stuck on gangsta rap, having found a simple yet seemingly secret formula that no other hip-hopper has been able to steal, at least not for more than a single or two. Mastermind -- Ross' annual stomp-and-swagger album, 2014 edition -- could be swapped out with 2009's Deeper Than Rap and only those burnt out on the album would know the difference, but when being stuck in a rut means you grind your wheels and all that spews out is gold, you only need to look to successful artists like the always funky James Brown, the always rockin' AC/DC, and the always stoned Devin the Dude for guidance. Always the same and always awesome is how Ross plays it, although to be fair, these clever street rhymes, the raspy and forceful delivery, plus the million-dollar beats are now allowed a little more room to roam as many Mastermind cuts pound past the five-minute mark. It makes the songs feel all the more epic, something that benefits the husky highlight "The Devil Is a Lie," a "crime pays" anthem with special guest Jay-Z, although the biggest monolith here is the Jeezy feature "War Ready," a claustrophobic battle cry that brings all the thrill and chaos of a Call of Duty, Grand Theft Auto, or even Mortal Kombat showdown. The challenges of living outside the law are addressed from beginning to end with "Drug Dealers Dream" representing square one ("Eating out of trash, sure do make you a killer"), while the Diddy-produced "Nobody" looks at the self-reliant and lonely life of a gangsta, all alone "Having sushi down at Nobu/Strapped like an Afghan soldier, and nowhere to go to" just because folks don't like that "My desire for fine things made me a liar." Variety is added when bad-man reggae enters the picture ("Mafia Music III" with Sizzla and Mavado) or the Weeknd give Ross a rare glimpse of elegant R&B heaven (harps and the pace of a Prince ballad power the great "In Vein"), p

William Leonard Roberts II (born January 28, 1976), better known by his stage name Rick Ross, is an American rapper. He derived his stage name from the drug trafficker "Freeway" Ricky Ross. Ross founded the record label Maybach Music Group, on which he released his studio albums Deeper Than Rap ,Teflon Don, God Forgives, I Don't, Mastermind, Hood Billionaire, Black Market, Rather You Than Me, and most recently Port of Miami 2. William Leonard Roberts II was born in Coahoma County, Mississippi and raised in Carol City, Florida, near Miami After graduating from Carol City Senior High School, he later attended the historically black college Albany State University in Albany, Georgia. After being signed to Suave House Records, former label for rap duo 8Ball & MJG, he eventually signed a deal with Slip-n-Slide Records, which has been under the Def Jam umbrella since 2006. While signed to Slip-n-Slide, Ross toured with fellow rapper Trick Daddy and made guest performances on other Slip-n-Slide rap albums His debut album Port of Miami was released in August 2006 and debuted at the top spot on the Billboard 200 album chart, with sales at 187,000 units after its first week In March 2008, his second album Trilla was released and, as its predecessor Port of Miami had, debuted at the top of the Billboard 200.[8] Its lead single "Speedin'" featuring R. Kelly peaked at #121 on the Billboard Hot 100; the next one, "The Boss" featuring T-Pain peaked at #17 on the Hot 100. The third single "Here I Am" featured Nelly and Avery Storm Deeper Than Rap is the third studio album by American rapper Rick Ross, released April 21, 2009 on his label Maybach Music Group and Slip-n-Slide Records, with distribution from Def Jam Recordings. The album debuted at number one on the U.S. Billboard 200 chart, selling 158,000 copies its first week. Singles from the album were: Mafia Music, Maybach Music II, Magnificent, & All I Really Want. Teflon Don is the fourth studio album by American rapper Rick Ross, released July 20, 2010 on Maybach Music Group and Def Jam Recordings. Production for the album took place during 2009 to 2010 and was handled by several record producers, including Clark Kent, No I.D., The Olympicks, J.U.S.T.I.C.E. League, Lex Luger, Danja, The Inkredibles, The Remedy, and Kanye West The album debuted at number two on the US Billboard 200 chart, selling 176,300 copies in its first week. It attained some international charting and produced three singles with moderate Billboard chart success. Upon its release, Teflon Don received generally positive reviews from most music critics, earning praise for its cinematic production and Ross's lyrical persona. Ross has signed Pill, Meek Mill, & Wale to his label Maybach Music Group. In 2010 Rick Ross made an offer to rapper Wiz Khalifa to sign to Maybach Music Group but he decided to sign with Atlantic instead. Read more on Last.fm. User-contributed text is available under the Creative Commons By-SA License; additional terms may apply.

OTHER RELEASES ON AAA RECORDINGS OR BY ROSS, RICK:

We have many other items in stock by Ross, Rick and on the label AAA Recordings.