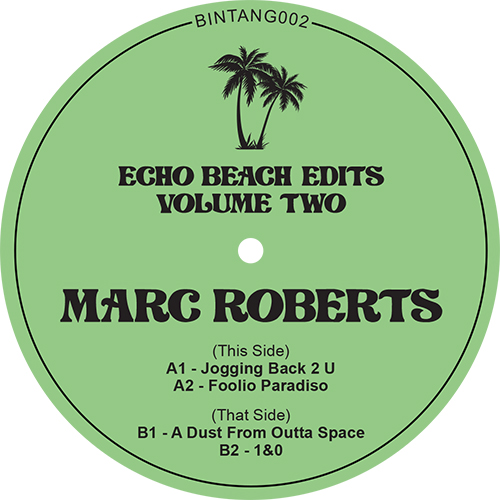 - NEW RELEASE
Sorry, this item is currently unavailable.
ARTIST:
Roberts, Marc
TITLE:
Echo Beach Edits Vol. 2
LABEL:
Pantai People
CATNO:
BINTANG002
STYLE:
Soulful House / Nu-Disco / Deep House / Deep House / Nu-Disco / Soulful House /
FORMAT:
Vinyl record
DESCRIPTION:
Vocal Soulful House -4 Track EP - Who wouldn’t want to be soaking up the rays, Bali beachside right now, sippin’ on something strong, letting the music wash over you from the club behind? Well, following on from Austin Ato’s smasher for the label’s first release, Pantai People strap you in once again with a first-class ticket to that exotic, slice of summer we are all pining for, serving up four delectable edits from Marc Roberts.

Summer is but a distant memory in real terms, but in musical terms we can bring back the sunshine whenever we fancy. And that's what Marc Roberts does and then some here with four poolside classics. They follow on from Austin Ato's smasher for the label's first release in fine style with opener 'Jogging Back 2 U' full of bendy bass and heart-wrenching vocals. 'Foolio Paradiso' then layers up glossy chords and retro twins stabs with a sentimental r&b vocal that brings the love. The late night cool of 'Foolio Paradiso' has an exotic feel that will have you reaching for the cocktails and last of all '1&O' brings the funk.

Marc Roberts is an Irish pop singer that represented Ireland at the 1997 Eurovision Song Contest with a song called "Mysterious Woman" that came 2nd. Ever since the day he mesmerised the audience at his local school concert singing Don McLean’s American Pie, Marc Roberts was destined for stardom.It was the spontaneous burst of wild applause from parents and friends in his hometown of Crossmolina, Co Mayo, that sowed the seed for his love of performing.Marc was bitten by the showbiz bug that night, but never imagined that by 1997 he would be representing Ireland on the international stage, singing in the Eurovision Song Contest before 300 million TV viewers. He came second with Mysterious Woman, and it officially launched his career as he went on to perform on top TV shows that included the Late Late Show, Richard & Judy, Open House, and the Kelly Show. Since the glory days of Eurovision, Marc has been carving out a lifestyle as a live performer, singer/songwriter and even finds time to host a popular Saturday afternoon radio show on Galway Bay FM. He has enjoyed critical acclaim for his tribute concert to the late John Denver, who is one of his influences along with other singer/songwriter legends like James Taylor, David Gates, Dan Fogelberg, Janis Ian and Carole King. Marc has also become a mentor to his showbiz pal Daniel O’Donnell, guiding and encouraging the superstar to become a songwriter. Realising that Daniel’s turn of phrase had a lyrical quality, Marc coaxed him into co-writing songs with instant success. The fruit of their partnership had led to several O’Donnell/Roberts songs appearing on Daniel’s recent top-selling albums. With the singer/songwriter now back in vogue, thanks to the popularity of artists like David Gray, Marc has now released his third album called 'Once In Your Life'. Read more on Last.fm. User-contributed text is available under the Creative Commons By-SA License; additional terms may apply.
FREE SHIPPING ON ORDERS OVER £100 TO UK MAINLAND ONLY
See exclusions
View Cart