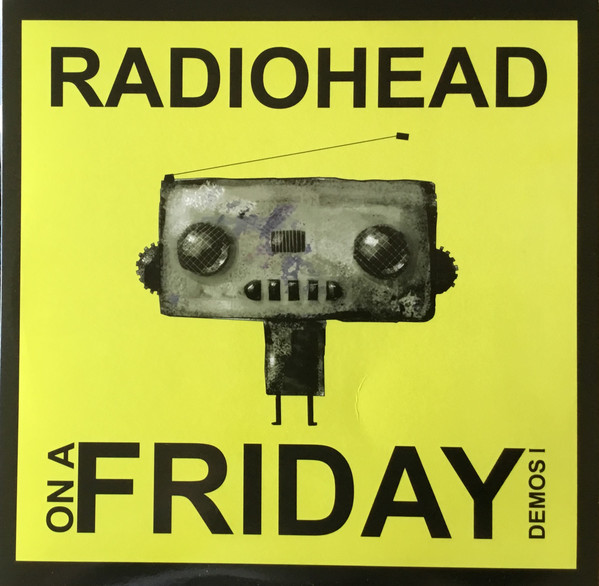 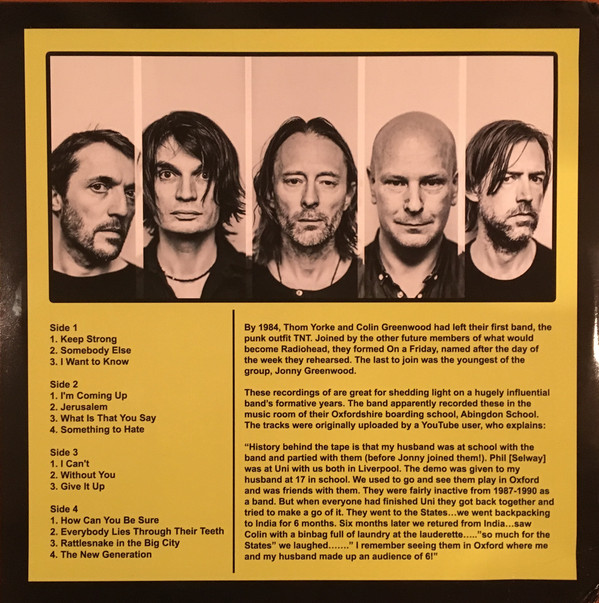 RADIOHEAD - ON A FRIDAY DEMOS 1

Before Radiohead released The Bends in 1995 and kicked off an unimpeachable run, there was 1993’s Pablo Honey. For a time, I ranked Pablo Honey alongside stuff like the Clash’s Cut The Crap: embarrassments by bands that were otherwise unassailable, the kind of albums the band and fans alike tried to willfully write out of history. A closer relative to Pablo Honey is probably Blur’s 1990 release Leisure. Both are less bad than their reputation suggests. Their main failings are being pretty derivative, merely solid efforts from artists that would later achieve just about the greatest successes possible for a rock band.

But before even that, Radiohead were On A Friday, a group of high school friends who rehearsed — drum roll, please — on Fridays, in the music room at their high school. On A Friday existed on and off through the latter half of the ’80s dependent on wher

Radiohead are an English alternative rock band from Abingdon, Oxfordshire, UK which formed in 1985. The band is composed of Thom Yorke (lead vocals, rhythm guitar, piano, beats), Jonny Greenwood (lead guitar, keyboard, other instruments), Ed O'Brien (guitar, backing vocals), Colin Greenwood (bass guitar) and Phil Selway (drums, percussion). The early years (1992 – 1995) Radiohead released their first single, "Creep" in 1992. The song was initially unsuccessful, but it became a worldwide hit several months after the release of their debut album, Pablo Honey (1993). Radiohead's popularity rose in the United Kingdom with the release of their second album, The Bends (1995). The band's textured guitar parts and Yorke's falsetto singing were warmly received by critics and fans. International success (1996 - 2000) Radiohead's third album, OK Computer (1997), propelled them to greater international fame. Featuring an expansive sound and themes of modern alienation, OK Computer has often been acclaimed as a landmark record of the 1990s. A change in style and leaving EMI (2000 – 2003) Kid A (2000) and Amnesiac (2001) marked a change in the band's musical style. Radiohead incorporated experimental electronic music, Krautrock, post-punk and jazz influences into their songs, dividing fans and critics, but they remained popular. Hail to the Thief (2003), a mix of guitar-driven rock, electronics and lyrics inspired by headlines, was the band's final album for their major record label, EMI. Independent releases and touring (2005 - 2013) In 2007, Radiohead independently released their seventh album, In Rainbows, originally as a digital download for which each customer could set their own price, later in stores, to critical and chart success. In 2011, Radiohead released their eighth album, The King of Limbs - again independently - which was described as an exploration of rhythm and quieter textures. In February 2012, Radiohead began The King of Limbs world tour - with concerts in the US, Canada, Mexico, Europe, Japan, Taiwan, South Korea, Australia and New Zealand. In early 2013, following the tour, Thom Yorke released a studio album entitled Amok with his band Atoms for Peace. Ninth Studio Album - "A Moon Shaped Pool" (2016) After much speculation, on May 8, 2016, Radiohead released their long awaited ninth album,"A Moon Shaped Pool" on various streaming services. The band announced the release of their latest 11-track album on Twitter. The first track from the album was "Burn the Witch". Glastonbury 2017 On October 20, 2016, Radiohead was announced as the headline act for the opening night at Glastonbury Music Festival in June 2017. Read more on Last.fm. User-contributed text is available under the Creative Commons By-SA License; additional terms may apply.

OTHER RELEASES ON AAA RECORDINGS OR BY RADIOHEAD:

We have many other items in stock by Radiohead and on the label AAA Recordings.