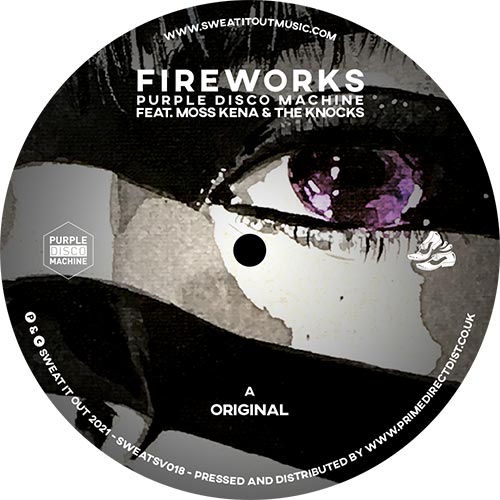 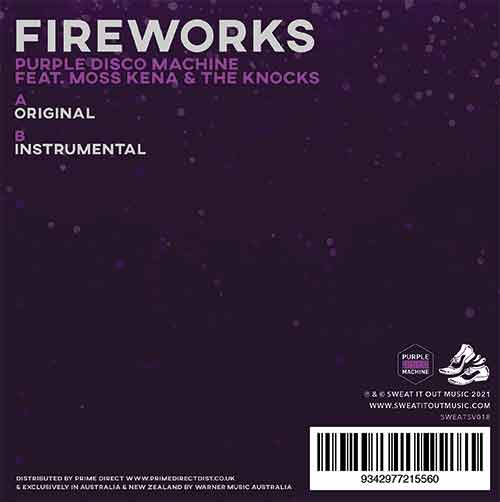 Over the last few years, Purple Disco Machine claimed his stake as one of the leading electronic producers of a generation, with 2020 being no exception. With over 400k radio spins and 150M+ streams to date, and still going strong, ‘Hypnotized’ has been an inescapable anthem the worldover, accredited triple platinum in Italy, further gold accreditations across Germany, Poland, Switzerland and Austria, #2 on the European Airplay Chart, and #9 on the Global Shazam Chart.

The new single ‘Fireworks’ is an instant dance-floor filler, with Purple Disco Machine’s bright production styling, funky basslines, sexy guitar licks, tropical steel drums, and the amazing soulful vocals of breakout singer-songwriter Moss Kena. The Knocks round out the record with the charming recording of the children’s vocals at their studio in NYC, partnering with local school kids from the community. Released in conjunction with an imaginative and futuristic music video, directed by Greg Barth, the clip features street dancing gangs of the ‘Boomers’ and ‘Gen-Z’ battling it out in the ultimate turf war.

Speaking of the collaboration, Moss Kena shares ‘I’ve wanted to work with Purple Disco Machine for a while. I'm a big fan, so when the opportunity came I was very excited, the beat didn’t disappoint and I knew it needed a banging, fun, pop, top line. ‘Fireworks’ is an infectious mood booster, it’s about wanting to be that person that can light up a room, the life and soul of the party, picking people up when they’re down. That is what the music did for me so the narrative felt very natural.’

Breaking out in style with his ballad-like rendition of Kendrick Lamar’s ‘These Walls’ in 2017, and earning a nod from the acclaimed Pulitzer Prize winning rapper himself, Moss Kena has quickly made a name for himself as one of the most exciting new artists in the game, now with over 34 million combined streams under his belt, and huge support across BBC Radio 1, Kena has gone on to support Rita Ora, Jess Glynne, and Bastille on their various UK/European tours, whilst earning fans amongst industry tastemakers including Zane Lowe, Elton John, Pete Tong, Annie Mac, and Ebro Darden.

The Knocks are a New York City-based institution and have become staples of the electronic music scene, amassing over 500 million streams across their releases to date, delivering carefree dance music across a variety of styles. With two full length LPs and several EPs under their belt, the duo have gone on to collaborate with the likes of Foster the People, Sofi Tukker, and MNEK, whilst making numerous US late night TV appearances on Stephen Colbert, Jimmy Fallon, Jimmy Kimmel, and Seth Meyers. In addition, they have toured around the world with music heavyweights including The 1975, Justin Bieber, and Ellie Gouldin