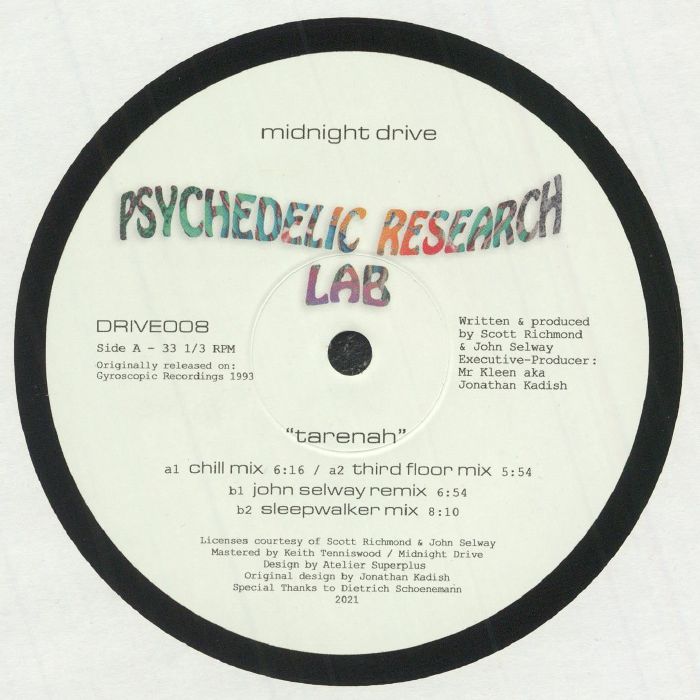 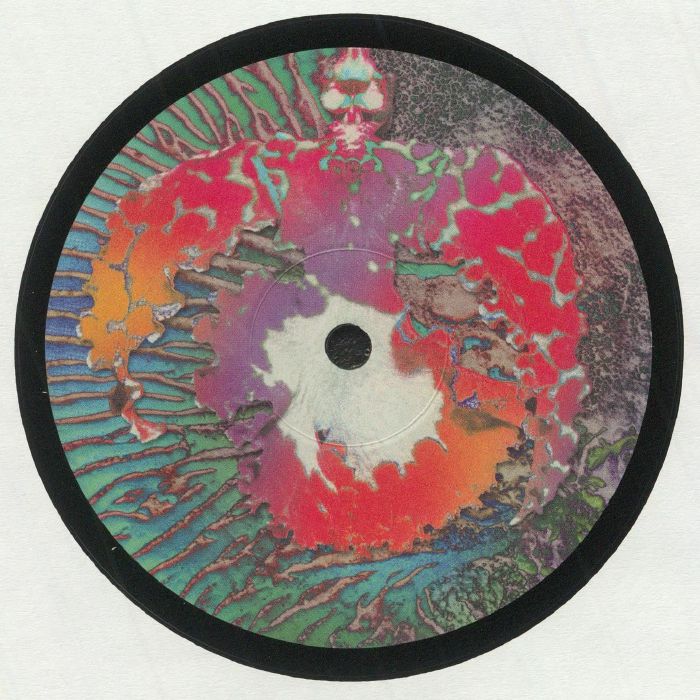 - NEW RELEASE
Sorry, this item is currently unavailable.
ARTIST:
Psychedelic Research Lab
TITLE:
Tarenah
LABEL:
Midnight Drive
CATNO:
DRIVE008
STYLE:
Deep House / Ambient /
FORMAT:
Vinyl record
DESCRIPTION:
Classic 1993 Deep House /Ambient House - Tarenah was one of only two singles pressed under the nom de plume of Psychedelic Research Lab - a collaboration between Scott Richmond and John Selway which began while the pair were attending music conservatory at SUNY Purchase College, in upstate New York. Scott produced the first version of the track for a modern dance performance in 1993. A mix of electronics and room full of live musicians, the session featured an afro-cuban percussionist, a Bangladeshi vocalist / tabla player, a classical flautist, and a reggae guitarist, with Scott on keys and engineering, and John on multiple TB-303s. The duo played the piece to a pal, who said, “Listening to your music is like being in a psychedelic research lab” and the moniker was born. DJ Jonathan Kadish, the chill out resident at pioneering NYC rave, NASA, championed the track and subsequently commissioned four remixes for his label, Gyroscopic Recordings.

The tune has been elevated to legendary status in certain circles - due to it being a firm favourite of “The Godfather Of Chill-out”, the late DJ Jose Padilla. Jose at this time had a penchant for “ambient breaks / breakbeats” - seminal stuff like the work of San Francisco's Hardkiss crew and other Bay Area artists. According to close friend Phil Mison, drawn to the Chill Mix, Jose Padilla played and played Tarenah at Ibiza`s Cafe del Mar. It was a daily constant in Jose`s sets for several seasons, and he eventually included the track on the second volume of his essential compilation series honouring said White Isle shrine - put together in the mid-90s for the label React. Sealing the tune`s fate and making Tarenah forever synonymous with Jose and the golden, halcyon, San Antonio, Cala Des Moro, sunsets he soundtracked.

The 3rd Floor Mix, named after the location of the SUNY Purchase studio, is tribally-tinged uplifting progressive house - taking its cues from the contemporary Dutch imprints, Fresh Fruit and Touche. John Selway’s Remix (titled “Spy’s Sub Mix” on the original pressing) strips the track back to a cool, more minimal, jack - heavily influenced by the “bleep” sound of Sheffield`s Warp Records. The Sleepwalker Mix is beatless. Tailored from twisting, intertwining, 303 drones.

Following Tarenah, Scott and John continued devoting their life to dance music. Scott went behind the scenes, founding - alongside Jonathan Kadish - the famous Satellite Records dance music record store chain. He also ran the house and trance labels, Central Park and Pitch Black. In recent years, Scott has worked in artist management, and within the global music festival scene, primarily with Vh1 Supersonic and Ticket Fairy India, which has taken him to Mumbai, Goa, and Pune. John has had an amazingly prolific electronic music career, building a vast, and varied catalogue of productions - both solo, and through collaboration. From Disintegrator and working on Deep Dish`s debut single, to Smith & Selway and The Rancho Relaxo Allstars. Along the way finding the time to run labels such as Serotonin and CSM. Currently John is teaching and mentoring the next generation of electronic music artists at 343 Labs music school, while still producing forward-thinking techno and electro.

This is the first time Tarenah has been reissued in full on vinyl, and Midnight Drive are very proud to present this sublime underground classic once more. Reissued in full conjunction with John Selway and Scott Richmond, remastered by Curvepusher, London and distributed worldwide by Above Board distribution 2022.