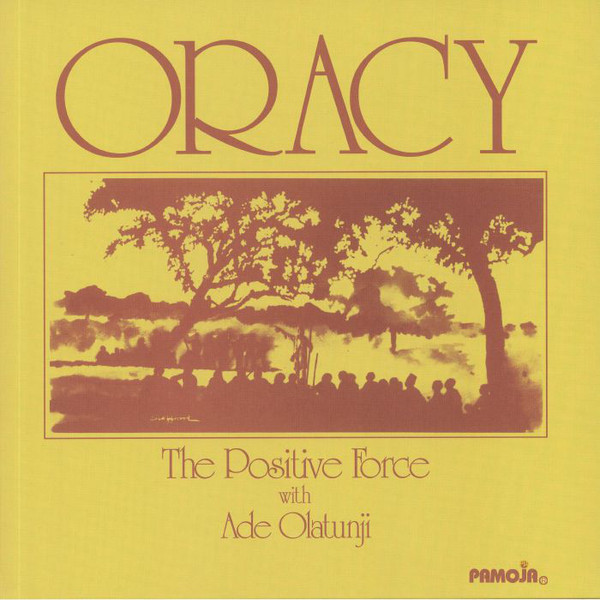 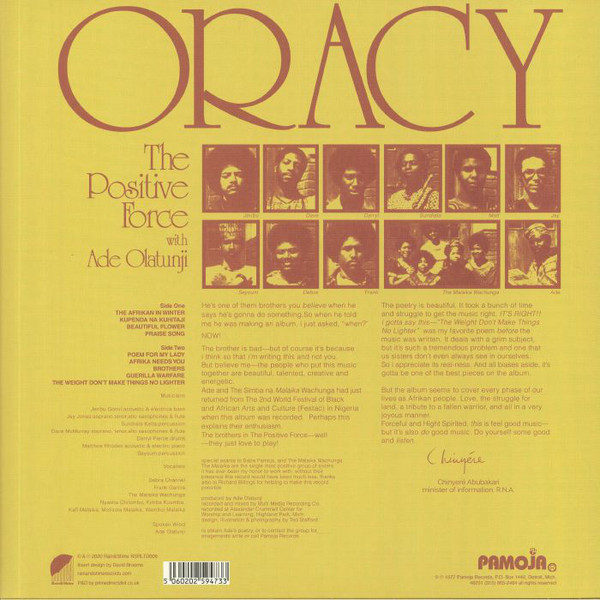 “I remember Detroit being a cultural hotbed in 1977. There was poetry, theater and music everywhere. I remember even a local bar on the east side even had a poetry night. I don't remember a lot of unemployment or blighted neighbourhoods back then The greatest takeaway from my trip to Nigeria, was the term "Oracy." I want to say that Wole Soyinka, was giving a talk about about communicating with illiterate or functionally illiterate people and he was talking about oral literacy, or "oracy," for short. It struck me as a perfect word-- for what I was doing, practising. When we decided to produce a record of poetry and music there was no question that it would be titled "Oracy."

An eight-piece funk/soul band consisting of six males and two females (Brenda Reynolds and Vickie Drayton), Positive Force were founded in Pennsylvania through the efforts of Reynolds and Albert Williams. They were discovered by Nate Edmonds, an organist/pianist, writer, arranger, and producer for All Platinum/Stang/Sugarhill Records, who got them a deal with Sugarhill. Edmonds, who served as the group's mentor, also played organ with Curtis Knight & the Squires, a band that included Jimi Hendrix, in the mid-'60s. Positive Force's most-successful performance was an uncredited party ambience performance on the Sugarhill Gang's "Rapper's Delight." However, success under their name eluded them; their debut, "We Got the Funk" (1979), flopped in the States but became a small-ish club hit in the United Kingdom. Sugarhill issued an album, Positive Force, in 1980 along with a second single, "Especially for You." Again, nothing sales-wise in the States, but they enjoyed a little cult following in the U.K. and appeared on the Top of the Pops television show — their first and only taste of stardom. "We Got the Funk" made a second appearance on the U.K. charts as part of a medley from Calibre Cuts; the occasion marked their last chart showing. They reemerged in 1982 as Positive Express for a final album, entitled Changing Times, a joint venture by Victory and Sugarhill Records. After the single "Welcome to the Party" b/w "Not on the Outside" (the Moments' debut hit) stiffed out, they disbanded. Though known for funk, Positive Force/Express had a slow side, which they demonstrated on their albums via tearjerkers like "Today It Snowed." Read more on Last.fm. User-contributed text is available under the Creative Commons By-SA License; additional terms may apply.
FREE SHIPPING ON ORDERS OVER £100 TO UK MAINLAND ONLY
See exclusions
View Cart