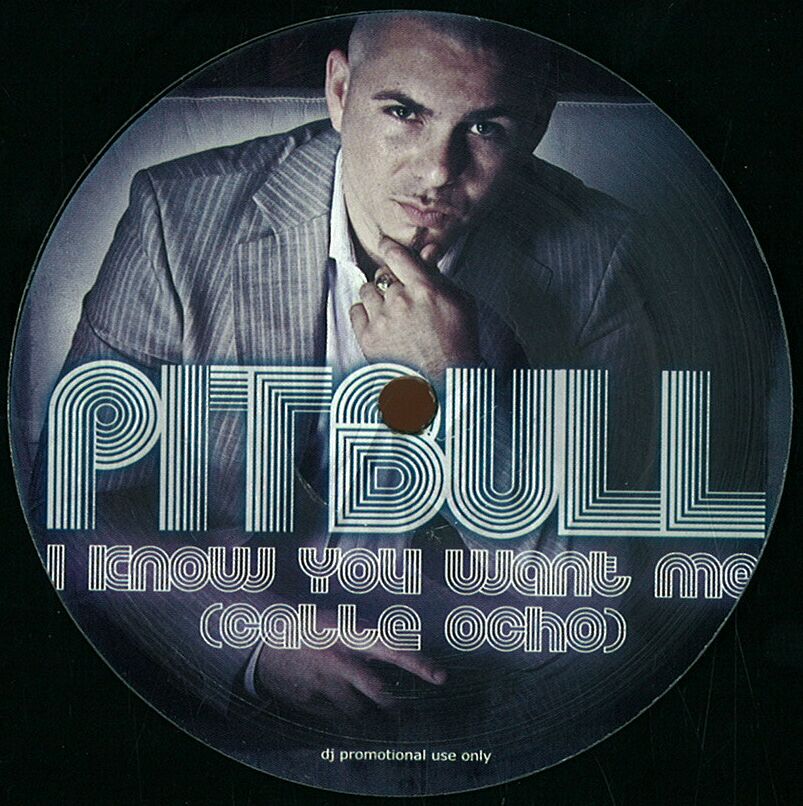 PITBULL - I KNOW YOU WANT ME

There are at least 5 artists called Pitbull: 1) Pitbull is an American rapper from Miami. 2) Pitbull was an American indie rock band from Boston. 3) Pitbull is a Belarusian heavy metal project by Petr Elfimov. 4) Pitbull was a hardcore band from Detroit. 5) Pitbull was an Oi! band from Germany Armando Christian Pérez (born January 15, 1981 in Miami, Florida), better known by the stage name Pitbull , is a Cuban-American rapper signed to his own label, Mr 305 Inc. The Give Me Everything (Tonight) Songfacts reports that he adopted his canine moniker because, "They bite to lock. The dog is too stupid to lose. And they're outlawed in Dade County. They're basically everything that I am. It's been a constant fight." His first recorded performance was on Lil Jon & the East Side Boyz album Kings of Crunk in 2002, after which he released his debut album, M.I.A.M.I., in 2004. He has since released 2006's El Mariel, 2007's The Boatlift and 2009's Rebelution, which debuted at #8 on the Billboard 200. Pitbull's breakout hit was the Lil Jon collabo "Culo" produced by Lil Jon & The Diaz Brothers. In addition, Pitbull has also released several mixtapes, the most recent being Unleashed Volume 6, which are mostly composed of freestyles and remixes of popular rap music. Both thematically and musically, the 25-year-old is seen as a modern-day equivalent of earlier Miami rappers such as the 2 Live Crew and Afro-Rican. It was in fact former 2 Live Crew leader Luther Campbell who gave the up and coming rapper his first chance to shine. Apart from Crunk, his album shows clear influences from both Miami bass and freestyle. In addition to his musical work, Pitbull has also been featured in The Source expressing his stance on Dictator Fidel Castro and he was also part of their Unsigned Hype Section. He contributed to an essay published in the New York Post that criticized Che Guevara's iconization in clothing and other areas. In video games, Pitbull's hit single "Dammit Man" produced by Jim Jonsin is featured in Midnight Club 3: DUB Edition, and he also plays himself in the upcoming video game based on the 1980's Scarface. His super hit "Toma" is featured in WWE Day of Reckoning 2. Also, an album cut, "Back Up" produced by The Diaz Brothers, is featured on the EA game Fight Night: Round 2. In late 2005 he re-released "M.I.A.M.I." as a separate charting entry, whilst his "Welcome to the 305" mixtape was released. In January 2006 he guest-starred in UPN's South Beach. Also in 2006 he recorded "Nuestro Himno" in collaboration with Wyclef Jean, Carlos Ponce, and Olga Tañón. The first single from El Mariel has been released, entitled "Bojangles". The album, slated for an October 31st release, will feature guest artists Lil Jon, Ken-Y of Rakim y Ken-Y, Rick Ross, Bun B and the Ying Yang Twins. El Mariel will lead up to Pitbull's 2007 release of an all-Spanish album entitled "Armando", which will have an Afro-Cuban feel[1] The cover of Pitbull's 2005 album Money Is Still A Major Issue.Pitbull has a global music publishing deal with BMG Music Publishing. On the evening of July 31st, 2006, when Cuban Dictator Fidel Castro announced that he was transferring his duties to his brother Raúl Castro, Pitbull jumped into the studio at 11:00PM to write the Ya Se Acabo (which means 'it is over') single. Stating the verse 'hasta luego' (which means 'see you later') during the duration of the song. The song is currently being played widely on Miami radio stations, most noteably Power 96. Pitbull has contributed much to the Reggaeton music movement. He has worked alongside Zion Y Lennox in the song "Jump & Spread Out" featuring Miri Ben-Ari. He also participated in Daddy Yankee's "Gasolina" remix featuring N.O.R.E.. He was also featured in Yaga & Mackie Rank's "Muevete" hot Reggaeton single, and Elephant Man's "Rah Rah Medley" Remix. He appeared in Don Omar's pobre diabla remix and otra noche remix. Pitbull is also known to appear in various remixes like an alternative remix to Salt Shaker by the Ying Yang Twins, Here We Go by Dirtbag & Timbaland, Promiscuous by Nelly Furtado & Timbaland , and Lovers and Friends by Lil Jon & The East Side Boyz featuring Usher & Ludacris by adding his own verses to the songs. In October 2006, Pitbull hosted a mixtape which featured him in remixes, side by side today's hottest rappers. The Mixtape was created by Blend DJ, DJ ACV. The two worked together in 2005, aswell. The mixtape has since been avaliable for download on the dj's website djknowskillz.com In 2007 Pitbull and freestyle legend Stevie B. collaborated to do a remake of his dance hit "Spring Love" which is now titled as "Spring Love 2007". Read more on Last.fm. User-contributed text is available under the Creative Commons By-SA License; additional terms may apply.