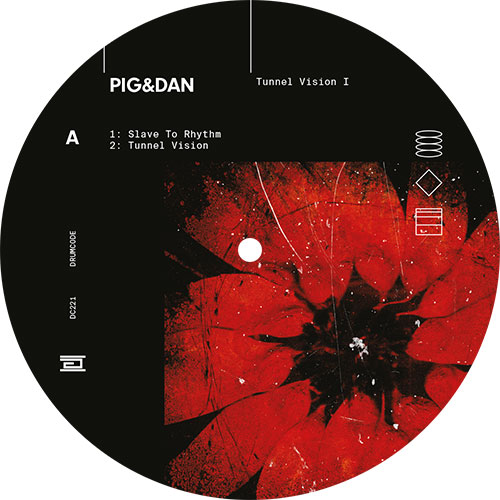 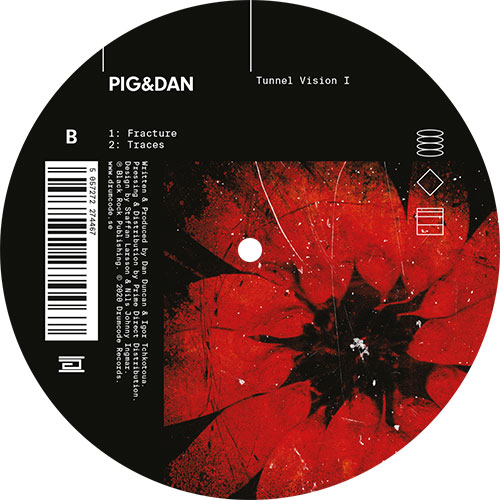 - NEW RELEASE
Sorry, this item is currently unavailable.
ARTIST:
Pig & Dan
TITLE:
[P1]Tunnel Vision I
LABEL:
Drum Code
CATNO:
DC221
STYLE:
Techno /
FORMAT:
Vinyl record
DESCRIPTION:
4 Track EP Of Bass Heavy Techno, Since their debut on Drumcode in 2016 with ‘Mexico’, Pig&Dan have firmly established themselves as one of the label’s most vital acts . They’ve dropped four memorable EPs, including a standout four-tracker with Adam Beyer ‘Capsule’, all of which reinforced their uncompromising production standards.

‘Tunnel Vision I’ is this accomplished talent in full bloom and the first of a two-part EP series. Rather than release an album and potentially explore less dancefloor-orientated tangents, the pair opted to present eight tracks the represent their high-impact, euphoric take on techno. The cuts have done damage at events such as Warehouse Project, Drumcode Halloween and Dockyard Festival.

‘Slave to the Rhythm’ hits like a hypnotic steam train, led by crisp drumlines before a massive synth lead comes into view complemented by a muscular bassline. Trippy synths and a propulsive groove give ‘Tunnel Vision’ its bite. ‘Fracture’ marches forward with plenty of low-end technoid swagger, before a synapse-tickling riff delivers a peak-time hit. ‘Traces’ brings proceedings back to earth, creating an evocative technoscape fit for welcoming the dawn.

There are more than one artist named PIG. 1) In his past lives, PIG was Lord Raymond Watts, known variously as Raymond Scaballero in Foetus, an icy addition to Psychic TV, a savage PA destroyer in Einstürzende Neubauten, and a founding catalyst of KMFDM. Watts began his arrest record in London where he was most likely pissed off about something and doing sound manipulations, loops and live sound for Psychic TV. He soon crashed into Einstürzende Neubauten (probably in a strip bar) and escaped the smug complacency of the English music scene by moving to Hamburg, Germany and setting up his Building Site studio in a bunker of munitions factory, where he invited in artists including Sprung Aus Den Wolken, Die Haut, and Christiane F. In his pursuit of a cutting edge music scene he sought out like-minded souls to create terrorism instead of tonality. Playing on European/American Neubauten tours, he quickly earned a reputation for destroying PA systems -- the security guards sent by the PA companies to protect the gear were not amused. Between their security thugs and ones hired by Watts to protect him from them, most nights ended up bloody, tense and occasionally on fire. While collaborating with Neubauten's "gritter" twins: Blixa Bargeld and FM Einheit, Watts lived in the red light district next to a brothel, in amongst the sleaze of the Hamburg docks. Watts heard about Sascha Konietzko who was doing bizarre work with vacuum cleaners, and after drinking him into submission, dragged him and his tall, pale cohort En Esch down the stairs into the freezing Building Site studio, where they locked themselves into Watts' "frozen cesspit" with 20' steel sheets and other garbage, emerging with the debut What Do You Know Deutschland? As one of the architects of the KMFDM sound, Watts went east to plow through the entrails of the German avant garde, planting the seed of his new experiment while KMFDM moved to America. The mutant was born out of the blood and piss in a basement studio opposite the Berlin Wall and became the 1988 debut album A Poke In The Eye. In addition, Watts was recruited by Foetus (Jim Thirwell) to be in his first live band, and after a European tour which involved disappearances, catholic school girls, and worms, Thirwell stayed on the produce the 12" Shit for Brains. Watts said he'd buy the next round and went to the US to record Steroid Maximus with Thirwell, and also did sound for Crime & the City Solution. When the wall came down, Watts split his time between London and Tokyo, looking for a new alien habitat after Berlin's pleasure dome exploded. PIG morphed with various collaborators and Watts started working with Japanese musicians, turning his attention to Schaft, which became a huge hit there. The Watts system emerged as an elastic style of working with refuse and collaborating with pariahs: one man's trash is another man's treasure, darling. Long-time PIG fan Trent Reznor came to see him around '91/'92 at a tiny club in Camden, England and introduced himself to the unimpressed Watts who was surprised that this fellow knew most of PIG's scattered discography. PIG was invited to open Nine Inch Nails' European tour in '94 -- complete with real pig heads on stage that were a load of fun after a few days' decomposition. Later, in 1995, Reznor's Nothing label released his fourth album, Sinsation. In the mid 1990s, Konietzko ran into Watts again and they worked on the Sin, Sex & Salvation EP, which led to Watts returning to the fold for Nihil, the most successful KMFDM album to date, which included the Watts-penned hit Juke Joint Jezebel. Watts also appeared on the band's Symbols album, doing vocals on the delightfully-titled Spit Sperm and Unfit, while KMFDM's Gunter Schulz and Sascha Konietzko appear on the 1997 release Wrecked, furthering their incestuous relationship. Still bigger in Japan than the rest of the world, PIG released his sixth album, Genuine American Monster, there in 1999. Finally, in 2002, PIG found a new American home with the Metropolis Records label, who had that year recently released the album ATTAK. In 2012 PIG released two demos; written by Watts; and performed by Watts and Marc Heal (Cubanate) entitled: Drugzilla (Rough As A Hog's Arse Mix) released on June 8th; Shake (Rough Mix) released on July 14th; and Drugzilla (Pork Talk Mix by Raymond Watts) released on December 2nd. 2) PIG is a Japanese melodic punk band from Japan. http://www.audioleaf.com/piggip3/ Read more on Last.fm. User-contributed text is available under the Creative Commons By-SA License; additional terms may apply.

There is more than one artist with this name: 1) Dan is an anarcho punk band from Darlington England, active from mid to late eighties who went on to release several records before breaking up in 1988. Members went on to form Sofahead. 2) Dan is a Finnish rap-artist. 3) Dan is a Hawaiian singer previously in the Japanese pop group pool bit boys (1997-2001). 4) Dan is an MC from Meridian. 5) Dan is a guitarist from north east of the UK. 6) Dan in a guitarist, singer/songwriter forming one half of UK guitar duo Howard & Dan 7) Dan is a dubstep DJ from Michigan. 8)DAN is a Japanese electronic music artist heading the TO-MAX minilabel. 9) Dan is one half of the Japanese pop duo TWIN CROSS. 10) DAN is a prog artist from Memphis, Tennessee who released the albums Paradigm in 2009, and Level in 2017, both available for free listening via Bandcamp https://danofficial.bandcamp.com. 11) DAN is a German Pop-Rock Band from the 90s. Read more on Last.fm. User-contributed text is available under the Creative Commons By-SA License; additional terms may apply.
FREE SHIPPING ON ORDERS OVER £100 TO UK MAINLAND ONLY
See exclusions
View Cart