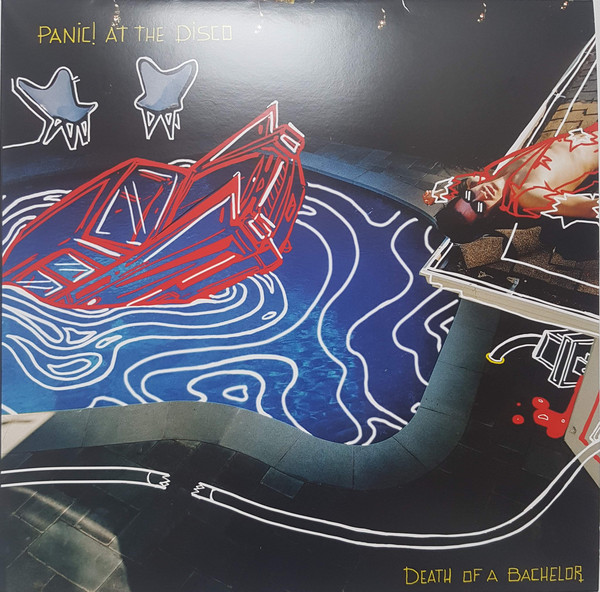 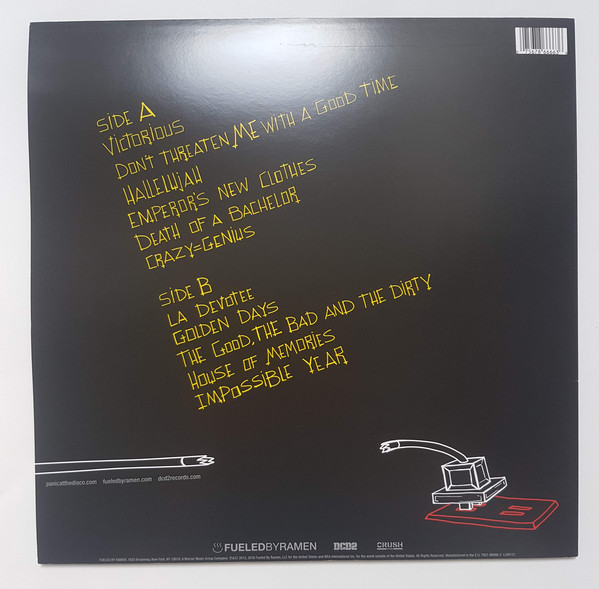 PANIC! AT THE DISCO - DEATH OF A BACHELOR

The first album recorded by the band since the departure of drummer Spencer Smith, who officially left in 2015, Death of a Bachelor is largely the vision of lead vocalist and founding member Brendon Urie. Inspired by Urie's 2013 marriage, as well as legendary vocalist Frank Sinatra's 100th birthday in 2015,

Death of a Bachelor works as a loose concept album celebrating the end of Urie's party-hearty single life, and his creative maturation from emo-pop poster boy to self-styled rock sophisticate. Produced by Urie along with Jake Sinclair (Five Seconds of Summer, Taylor Swift, P!nk), the album showcases an even more expansive sound than 2013's Too Weird to Live, Too Rare to Die!, rife with touches of body-bumping hip-hop, Sinatra-esque lyricism, and anthemic, Queen-like exuberance. Indeed, Panic! At the Disco have never been anything less than grandiose and Death of a Bachelor is no exception, revealing some of the group's most ambitious and over-the-top productions. With Sinclair, Weezer's Rivers Cuomo, Sam Hollander (Gym Class Heroes, Metro Station, Fitz & the Tantrums), and other collaborators at his side, Urie stuffs his songs with rambunctious, Beyoncé-ready beats, laser-toned synthesizers, muscular guitars, and a peacock's array of double-tracked vocals. Thankfully, he doesn't sacrifice any of Panic!'s infectious melodicism and pop craftsmanship in the process. Cuts like the gospel-inspired "Hallelujah" and the swaggeringly cheeky "Don't Threaten Me with a Good Time," self-consciously built around the B-52's "Rock Lobster" guitar riff, are as catchy as anything Panic! has ever created. Impressively, the densely if deftly packed production does little to detract from the sheer brilliance of Urie's voice on cuts like the burnished title track and wild-eyed, post-party hangover anthem "Victorious." Urie even summons his best Sinatra-style vocal warmth on the album’s closer, the languid, stylishly world-weary ballad "Impossible Year." Ultimately, Death of a Bachelor marks the final transformation of Panic! At the Disco from egalitarian emo band to collaborative pop band headed with singular charisma by Urie the uncontested chairman.

PLAY
CUE
MP3
a1
Victorious
a2
Don't Threaten Me With A Good Time
a3
Hallelujah
a4
Emperor's New Clothes
a5
Death Of A Bachelor
a6
Crazy=Genius
b1
LA Devotee
b2
Golden Days
b3
The Good, The Bad And The Dirty
b4
House Of Memories
b5
Impossible Year

Last FM Information on Panic! At the Disco

Panic! at the Disco is an American rock band hailing from Las Vegas, Nevada. The current sole member is vocalist/multi-instrumentalist Brendon Urie. As of 2018, the band has released six albums: A Fever You Can't Sweat Out (2005), Pretty. Odd. (2008), Vices & Virtues (2011), Too Weird to Live, Too Rare to Die! (2013), Death of a Bachelor (2016), and Pray for the Wicked (2018), with two Top 40 hits on the Hot 100 and four Top 10 hits on Alternative radio. Although the band officially formed as Panic! at the Disco in 2004, the first incarnation of the band was formed in 2002 under the name "Pet Salamander", with Ryan Ross, Spencer Smith, Brent Wilson, and Trevor Howell. It was during this time that Ryan Ross wrote "Time To Dance" and "I Write Sins Not Tragedies", so some consider the band to have formed as of 2002. In 2005, Panic! at the Disco, which at the time included Urie, Smith, guitarist/lyricist Ryan Ross, and bassist Brent Wilson, was discovered by Pete Wentz of Fall Out Boy, who, after hearing demos the band uploaded to PureVolume went to Las Vegas to hear the band play in their garage. He immediately signed them to his Fueled By Ramen label imprint Decaydance. After their debut A Fever You Can't Sweat Out was released, bassist Brent Wilson left the band. Although he claims he was fired, the other members deny this. The success of their first two singles helped catapult their debut album to the top of the Billboard Independent chart and to #13 on the Billboard 200 in July 2006. With Jon Walker filling in as temporary bassist, the band embarked on their first headlining tour through Europe. All of the dates sold out within hours. Immediately after returning, they did the same in North America. On July 3, Jon Walker became the permanent bassist of Panic! at the Disco. In early 2007, Panic! at the Disco began writing their follow up album but, after months of work, decided to rewrite the entire album from scratch in July 2007. While speaking to MTV, Ryan Ross explained that, before the decision to start over was made, the album had lacked a band set up and that it "sounded like a film score." He also explained that the new songs have "a more positive outlook to them." On January 9, the exclamation point (!) in the band's name was dropped. They defended the decision to drop the exclamation point during an interview with MTV: "It was never part of the name to us. (...) When we started doing new promo stuff for this album, we just told everyone not to use it anymore." Panic (sans "!") later confirmed that the second album was titled Pretty. Odd. with a release date of March 25, 2008. On July 6th, 2009, an announcement was put up on the band's official website and myspace page, stating that Ryan Ross and Jon Walker would be leaving the band to pursue their own musical interests. They have since formed the band The Young Veins. Brendon Urie and Spencer Smith, however, will stay and continue playing as Panic! at the Disco, with the exclamation point re-added. Fans can hear a snippet of Panic!'s demo entitled "Oh Glory" on the band's official website. Since the split, Panic! at the Disco joined Fall Out Boy, Blink-182, and Chester French on the first half of Blink-182's summer tour in 2009. They brought along Ian Crawford formerly of The Cab and Dallon Weekes of The Brobecks to temporarily replace Ross and Walker. The band also released a single titled New Perspective which was featured on the Jennifer's Body Soundtrack in August 2009. "New Perspective" was released on July 28, 2009.[26] Former The Cab member Ian Crawford filled in for Ross on their tour during the summer of 2009. Dallon Weekes, singer/songwriter of the indie band The Brobecks, filled in for Walker on bass on the tour as well.[27] The band re-entered the studio during early 2010 and spent much of the year recording their third studio album.[20] On January 18, 2011, the band revealed that their new album, Vices & Virtues, would officially be released on March 22, 2011. The album was produced by Butch Walker and John Feldmann.[28] The record's first single, "The Ballad of Mona Lisa", was released digitally on February 1, 2011, with the music video being released February 8, 2011. The band played 2 new, unheard songs "Nearly Witches (Ever Since We Met...)" and "Let's Kill Tonight" at recent concerts. On March 9, 2011, Panic! at The Disco released a short film titled "The Overture" which featured snippets of four, unheard songs: "Let's Kill Tonight", "Hurricane", "Ready to Go (Get Me Out of My Mind)", and "Nearly Witches (Ever Since We Met...)". On March 14, 2011, Panic! at The Disco streamed the full Vices & Virtues album on their Facebook page. Read more on Last.fm. User-contributed text is available under the Creative Commons By-SA License; additional terms may apply.
FREE SHIPPING ON ORDERS OVER £100 TO UK MAINLAND ONLY
See exclusions
View Cart