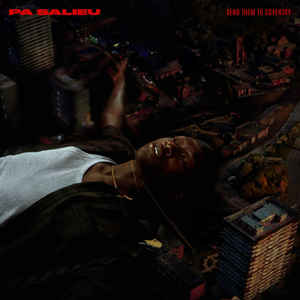 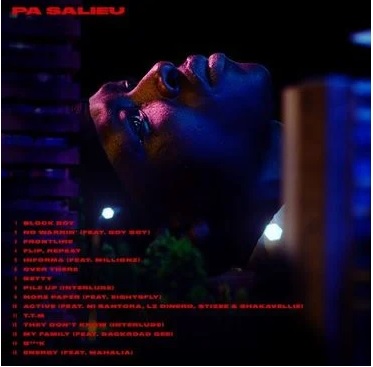 Pa Salieu Gaye (born 1 July 1997) is a British-Gambian rapper from Coventry. In January 2020 he released his debut single "Frontline", which was the most played track of 2020 on BBC 1Xtra. He has since featured on songs with South London's SL for "Hit the Block", Meekz, M1llionz and Teeway for "Year of The Real" and joined Backroad Gee and Ambush for the remix to "Party Popper". He has collaborated with artists such as FKA Twigs and SL. His style is renowned for blending elements of Afro-beats, grime and drill. In June 2020, he released "Betty" and "Bang Out". He released his debut mixtape titled Send Them to Coventry on 13 November 2020. Pa Salieu was born in Slough, where he spent the early stages of his life. His parents moved to the UK from The Gambia. He was named after his father's eldest brother, Pa Salieu, a police officer back home who died in his early twenties. His aunt is a Gambian folk singer. Before his first birthday, his parents sent him back to The Gambia where he lived with his grandmother. There, Pa spent his formative years living in a household with his elder relatives. He describes his time there as the most important period in his life. At the age of 8, his mother brought him back to England. They moved to Hillfields, a suburb in the North of Coventry. His new home provided inspiration for his music career, becoming the focus of his breakout song "Frontline" released in January 2020, produced by Jevon. Through the song, he depicts life in Coventry and documents the neighbourhood that raised him. Pa started pursuing a music career after his close friend was killed. He recorded his first freestyle at a friend's small home studio setup, where he would regularly visit to write and record music. In October 2019, he was the victim of a shooting in Coventry where he was shot in the head but he survived and made a full recovery. Salieu is signed to Warner Records. He wrote "Frontline" in 20 minutes, and the music video was released on YouTube via Mixtape Madness. Since its release, it has accumulated over two million views and over three million streams. It has also become the most played track of 2020 on BBC 1Xtra, Reprezent Radio and Rinse FM. Salieu's music has received support from Virgil Abloh, BBC Radio 1's Annie Mac and Tiffany Calver as well as OVO Sound co-founder Oliver El Khatib. The early momentum of "Frontline" has continued with a string of feature verses. He collaborated with South London rapper SL on the song "Hit the Block", as well as Meekz, M1llionz and Teeway on "Year of the Real". He also collaborated with Backroad Gee and Ambush for the remix to their track, "Party Popper". In June 2020, Salieu released two tracks – "Betty" and "Bang Out". He was premiered by Annie Mac and DJ Target on BBC Radio 1. He was described by the London Evening Standard as the rapper to watch in 2020, and has received strong support from J Hus. In January 2021, he was announced as the winner of the BBC Sound of... 2021. Read more on Last.fm. User-contributed text is available under the Creative Commons By-SA License; additional terms may apply.
FREE SHIPPING ON ORDERS OVER £100 TO UK MAINLAND ONLY
See exclusions
View Cart