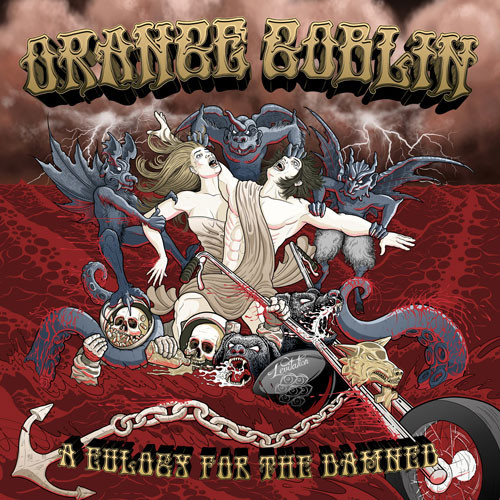 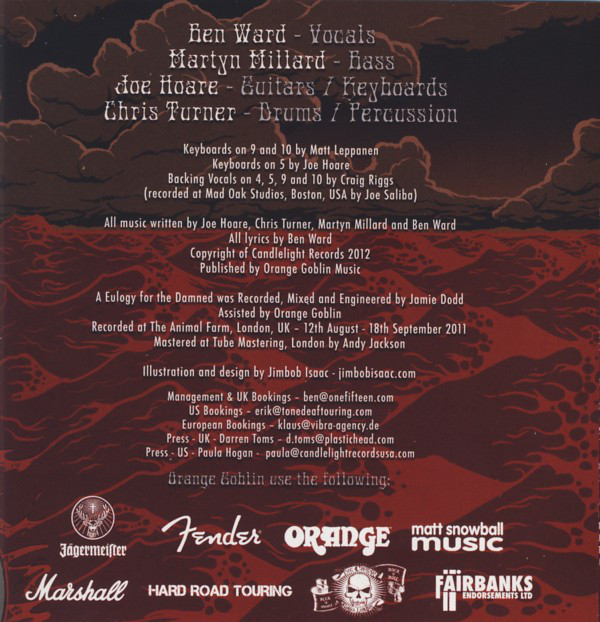 ORANGE GOBLIN - A EULOGY FOR THE DAMNED RSD 2021

British stoners Orange Goblin released 'A Eulogy For The Damned' close to 10 years ago and has slowly become a classic in the doom genre and hasn't been available on LP format since, now returning on gatefold 2 LP w/lyric book insert and embosed cover, and fully remastered by Jamie Gomez.

Orange Goblin, previously Our Haunted Kingdom, are a stoner metal band from London, United Kingdom that formed in 1995. The band's lineup currently consists of singer Ben Ward, guitarist Joe Hoare, bassist Martyn Millard, and drummer Chris Turner. The band was originally formed in 1995 under the name Our Haunted Kingdom. They released a split 7" with Electric Wizard in 1996 on Rise Above Records before adopting the moniker Orange Goblin. The band's first three albums were stoner/doom metal. On 2002's Coup de Grace they began to add punk, doom metal, and other influences to their sound. Their first five releases were issued by Rise Above Records. Rhythm guitarist Pete O'Malley left the band in 2004 to pursue a career as an artist. On December 16, 2005 the band celebrated its tenth anniversary with a concert at the Underworld club in Camden also featuring Scissorfight and Blood Island Raiders. Their 2007 album, Healing Through Fire was released on Mayan/Sanctuary Records. On September 3, 2008 the band announced that they had signed with Candlelight Records and were working on material for a new album with a September 2009 release date in mind. It was then announced in May 2009 that "Songwriting for the new album is ongoing but looks very promising with the skeleton of four or five new songs already in place. Two rough working titles for the new songs include Red Tide Rising and The Bishop's Wolf". The band had earlier announced that it had postponed the recording sessions for the new album due to "unforeseen circumstances" and apologized to the fans assuring them that "it will be worth the wait". Twelve months later, in March 2010, a statement was issued by the band stating that while they were not necessarily never going to release a new album ever again, the prospective forthcoming album was to be postponed for the foreseeable future. The band announced they will be recording new material in August 2011. Once mentioned on Ricky Gervais' XFM radio show. This recording was indeed completed in September 2011 and is set to be released early in February 2012 under the name of 'A Eulogy for the Damned' by Candlelight Records. In mid 2010 the band's back catalog was reissued on Rise Above Records in digipack form. In mid-December 2010 they celebrated their fifteenth anniversary with support coming from British blues-rock band Firebird - featuring previous members of Carcass and Spiritual Beggars - and American doom-rock band Solace culminating in their annual Christmas show in London. They have also played as one of the acts playing the 2011 edition of the Maryland Deathfest music festival in Baltimore, Maryland in the United States. Read more on Last.fm. User-contributed text is available under the Creative Commons By-SA License; additional terms may apply.
FREE SHIPPING ON ORDERS OVER £100 TO UK MAINLAND ONLY
See exclusions
View Cart