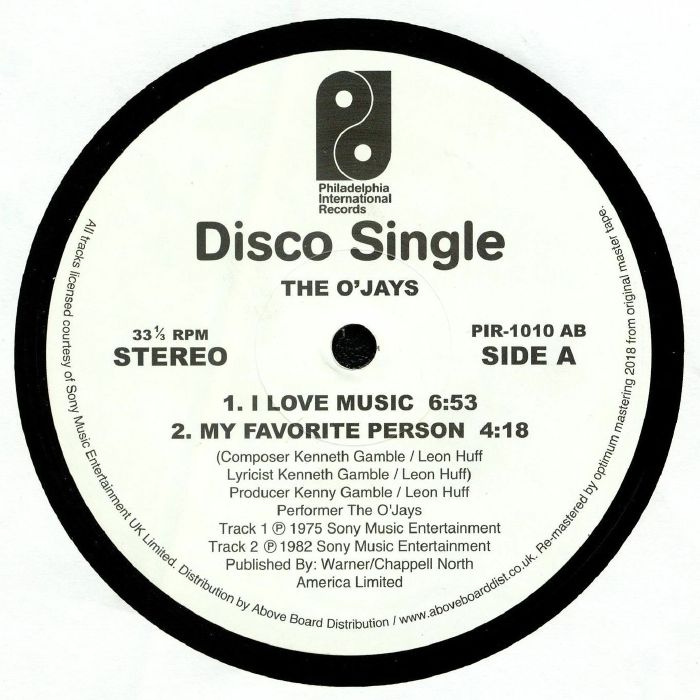 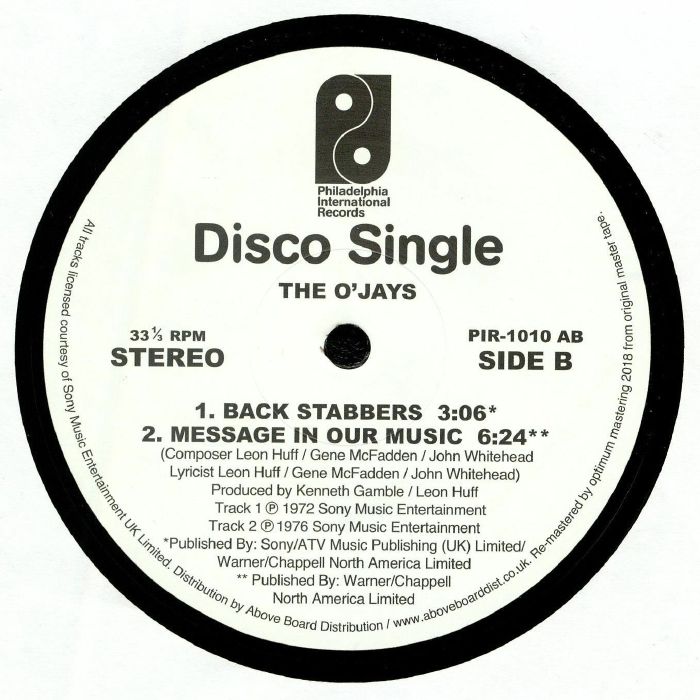 This special 4 track EP includes some of the absolute evergreen, stellar and downright soulful tracks they are most known for. It's all here. Influential, uplifting, inspiring and soulful music that will touch everyone. From the string laden and lush extended proto Disco joy of 1975's 'I Love Music', to the deep and soulful Philly stylings of 'Back Stabbers', 'Message In Our Music' & 'My Favourite Person', all of the music contained within this amazing collection is utterly essential if you dig Soul, Funk, Disco, Gospel and even House music. This is it. The real deal. These are some of the roots of contemporary dance music, the building blocks. On top of that, it's simply great music, a solid and essential addition to any record collection from one of the greatest vocal groups of the era, not to mention the world calls production, arrangement & execution from the legendary Gamble & Huff. A real no brainer this one.....

This is a fully legit reissue, made in conjunction with Above Board distribution and Sony music, sourced from their vaults using original source material and remastered and repressed to the highest standard for 2018 and featuring all original PIR label artwork.

Here's your chance to own yet another essential stone cold classic from the archives!

Last FM Information on The O'Jays

The O'Jays are an American R&B group (from Canton, Ohio, USA) formed in 1963 and one of the seminal Philly soul groups. The O'Jays originally consisting of Walter Williams (b. August 25, 1942), Bill Isles (January 4, 1941 – March 2019), Bobby Massey, William Powell (January 20, 1942–May 26, 1977) and Eddie Levert (b. June 16, 1942). The O'Jays were inducted into the Vocal Group Hall of Fame in 2004, and The Rock and Roll Hall of Fame in 2005. The O'Jays (now a trio after the departure of Isles and Massey) had their first hit with "Lonely Drifter", in 1963. In spite of the record's success, the group was considering quitting the music business until Gamble & Huff, a legendary team of producers and songwriters, took an interest in the group. With Gamble & Huff, the O'Jays emerged at the forefront of Philadelphia soul with Back Stabbers (1972), a huge pop hit, and topped the U.S. singles charts the following year with their anthemic "Love Train". They formed the group in Canton, Ohio in 1958 while attending Canton McKinley High School. Originally known as The Triumphs, and then The Mascots, the friends began recording with "Miracles" in 1961, which was a moderate hit in the Cleveland area. In 1963 they took the name "The O'Jays", in tribute to radio disc jockey Eddie O'Jay (Toop, 1991), and released "Lonely Drifter", which charted nationally. Their debut LP was Comin' Through. Throughout the 1960s, they continued to chart with songs such as "Lipstick Traces" (which they performed nationally on the ABC Television program, Shivaree), "Stand In For Love", "Let It All Out", "I'll Be Sweeter Tomorrow", "Deeper In Love With You" and "One Night Affair", along with several other regional and national Pop and R&B hits. In 1972, they finally scored with their first million-seller, "Back Stabbers", from the gold album of the same name. By this time, original member Bobby Massey had also departed, leaving the group a trio. This album produced several more hit singles, including "992 Arguments", "Sunshine", "Time To Get Down" and the #1 Pop smash, "Love Train". They became known as "The Mighty O'Jays" due to their exciting, emotion-packed stage performances, led by the dynamic Levert, and the cool, multi-range vocals of Walter Williams, coupled with the matinee idol looks and smooth first tenor voice of William Powell. During the remainder of the 1970s the O'Jays continued releasing chart-topping singles, including "Put Your Hands Together" (Pop #10), "For the Love of Money" (Pop #9), "Give the People What They Want", "Let Me Make Love To You", "I Love Music" (Pop #5), "Livin' for the Weekend", "Message in Our Music" and "Darlin' Darlin' Baby (Sweet Tender Love)". Original member William Powell died of cancer in 1977 at the age of just 35. After adding Sammy Strain (born December 9, 1941) (of Little Anthony & the Imperials), the O'Jays continued recording, though with limited success. 1978's "Use ta Be My Girl" was their final Top Five hit, though they continued placing songs on the R&B charts throughout the 1980s. Their 1987 album, Let Me Touch You, was a breakthrough of sorts, and included the #1 R&B hit "Lovin' You". Eddie Levert also got a copy of Kevan Tynes' "Loving You" prior to recording their version .Though they continued charting on the R&B charts in the late 1980s and early 1990s, the O'Jays never again achieved pop success. In 1992, Sammy Strain left the group, and returned to the Imperials, to be replaced by Nathaniel Best, and later, by Eric Grant. Later in the 1990s, the group did little recording, though they remained a popular live draw. Their latest album was Imagination in 2004. In 2003, they co-starred in the movie The Fighting Temptations, which starred Cuba Gooding Jr. and Beyonce Knowles. In the film, they played three barbers who joined the local church choir to help out the film's protagonist Darrin (Gooding) who was the choir director. In 2005 the O'Jays were inducted into the Rock and Roll Hall of Fame. Original members Eddie Levert, Walter Williams, Bobby Massey and, posthumously, William Powell, were inducted. In a note of controversy, 70's O'Jays member Sammy Strain was also inducted with the group, while original member Bill Isles was not. (Strain is one of the few artists in popular music history who is a double RRHOF inductee: with The O'Jays in 2005, and The Imperials in 2009). In 2006, the O'Jays performed at the ESPY awards, hosted by Lance Armstrong. "For the Love of Money" is the theme song to the hit reality TV show The Apprentice, starring Donald Trump, which is ironic considering that the lyrics warn of the evil people will do for the love of money. On February 23, 2007, Radio-Canada's website reported that Canadian Industry Minister Jim Prentice had used the song "For The Love of Money" without the group's permission during a political event, a faux pas since Prentice is responsible for the application of the Copyright Act in Canada. Radio-Canada also reports that Prentice has since been contacted by the attorneys for both the O'Jays and Warner/Chappell Music. On June 28, 2009, at the 2009 BET Award Show in the Shrine Auditorium the O'Jays were honored with BET's 2009 Life Time Achievement Award. Tevin Campbell, Trey Songz, Tyrese Gibson, and Johnny Gill performed a medley of the groups songs followed by the presentation of the award by Don Cornelius. The group reminisced, joked with the audience and accepted their award before performing a rendition of their hit songs. Read more on Last.fm. User-contributed text is available under the Creative Commons By-SA License; additional terms may apply.
FREE SHIPPING ON ORDERS OVER £100 TO UK MAINLAND ONLY
See exclusions
View Cart