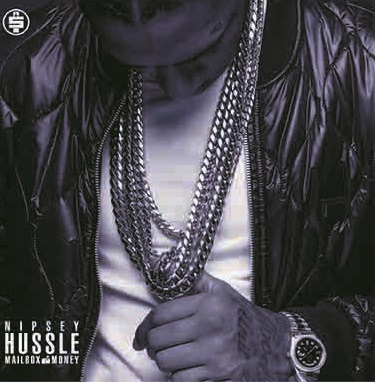 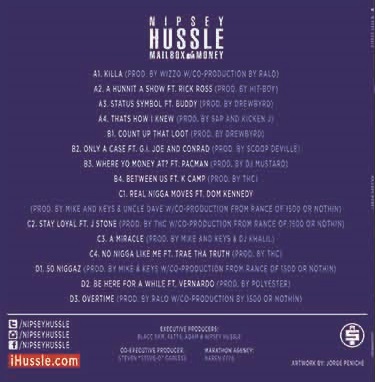 - NEW RELEASE
Sorry, this item is currently unavailable.
ARTIST:
Nipsey Hussle
TITLE:
Mailbox Money
LABEL:
AAA Recordings
CATNO:
HUSSLEMONEY323
STYLE:
Rap / Hip Hop / Rap / Hip Hop /
FORMAT:
Vinyl record
DESCRIPTION:
2x12" Rap/ Hip Hop Lp - Mailbox Money is the ninth mixtape by American rapper Nipsey Hussle, and the final commercial mixtape to be released during his lifetime. The mixtape was released as a free digital download on December 31, 2014, on mixtape hosting websites. It was also released in a limited first edition of 100 copies for $1,000 each including other incentives via his All Money In record label, which followed-up Crenshaw, that was sold under the same schema but rather 1,000 copies for $100. The mixtape features production by DJ Mustard, Rance, Hit-Boy, #DJ Khalil, Ralo Stylez and Wizzo, among others. Guest appearances on the mixtape came from Rick Ross, Dom Kennedy, K Camp, Trae Tha Truth, Buddy and many others. The mixtape was supported by the singles "A Hunnit A Show" featuring Rick Ross, "Between Us" featuring K Camp, "Where Yo Money At", "Count Up That Loot", and "50 Niggaz".

Following the underground success of 2013's Crenshaw, Los Angeles rapper Nipsey Hussle issued his ninth mixtape, Mailbox Money, in 2014. Flipping the business model employed for Crenshaw's physical release -- a limited run of one thousand copies priced at $100 -- Hussle pushed it one step further, restricting Mailbox Money to just a hundred copies for $1,000 each. For this set, Rick Ross and Dom Kennedy returned, joining Buddy, K Camp, Trae tha Truth, and others, alongside producers such as Hit-Boy and DJ Mustard. After the rapper's untimely death in March 2019, the mixtape debuted on the Billboard 200 at number 192.

OTHER RELEASES ON AAA RECORDINGS OR BY NIPSEY HUSSLE :

We have many other items in stock by Nipsey Hussle and on the label AAA Recordings.