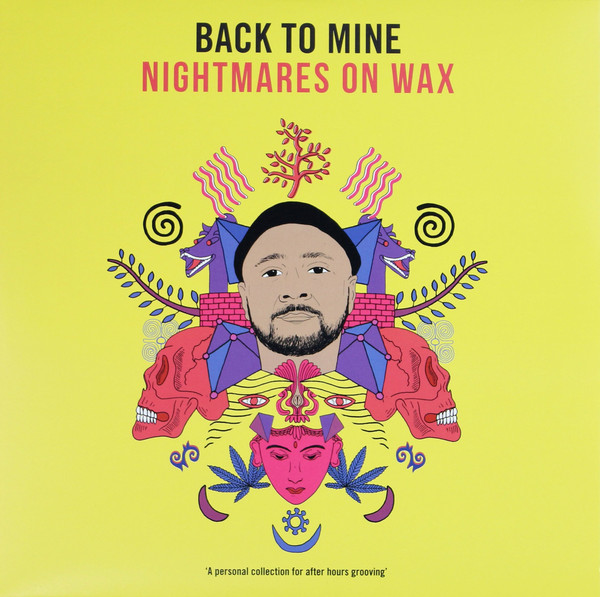 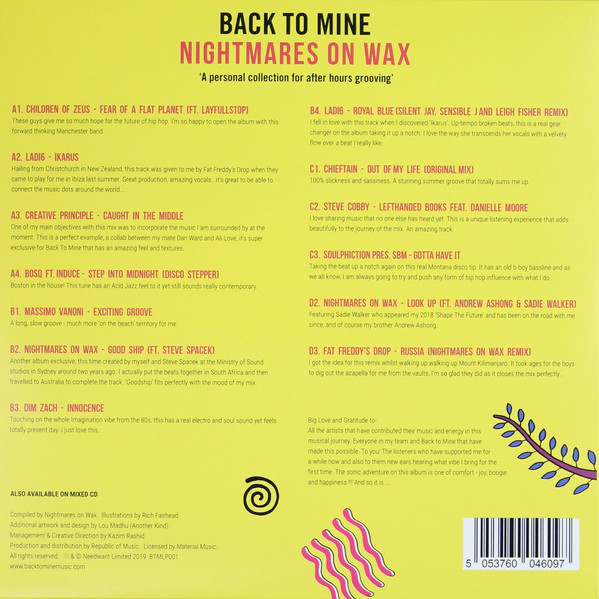 NIGHTMARES ON WAX - BACK TO MINE

The iconic compilation series "Back to Mine" returns in 2019, to mark its 20th anniversary, with the indomitable Nightmares on Wax, to share his personal collection of music for after hours grooving. The series was renowned for its eclectic selection and selectors which includes some of the biggest names in electronic and pop music, from the likes of Faithless to Pet Shop Boys, Groove Armada to New Order.

The collection includes three exclusive tracks, one new track from Nightmares on Wax, along with a remix from the man himself of seminal band Fat Freddy’s Drop and brand new project Creative Principle. The album is impeccably mixed and blended, as you’d expect from a DJ and collector of George’s pedigree. His selection includes a strong representation from his roots in Northern England. Opening with respected Manchester soul duo Children of Zeus, Hull’s Steve Cobby provides his own "Lefthanded Books" featuring Crazy P’s Danielle Moore and also introduces his chuggy-disco project Chieftain. There’s also room for the recent Nightmares on Wax recent single "Look Up". Moving internationally; there’s Greek producer Dim Zach who doffs a cap to Imagination on the synth-heavy "Innocence", US-born / Colombian based Afro / Latin / disco / funk producer Bosq, Italy’s Massimo Vanoni with the slo-mo funk "Exciting Groove", the deep and jazzy "Gotta Have It" by Berlin’s SoulPhiction side project SBM and two tracks by New Zealander Ladi6.

This first re-installment of "Back to Mine" is a triumphant return for the iconic and music loved series. Nightmares on Wax delivers an incredible selection of tracks that gives the listener a real insight into the artists personal and extensive taste. 'I always hoped that when the time was right I would be asked to do a Back To Mine release and so when the call came there was absolutely no hesitation'. - Nightmares on Wax.

Nightmares on Wax is DJ and musician George Evelyn, also known as DJ Ease (Experimental Audio Sample Expert), from Leeds, United Kingdom. The musical style is a combination of electronic sounds and hip hop beats, often regarded as "chillout". Nightmares On Wax's music is released on Warp Records. Initially working with Kevin Harper a.k.a Boy Wonder their first release was the massive underground hit 'Dextrous' which sampled the as yet unknown A Guy Called Gerald's 'Voodoo Ray' on their own Poverty Records label. Along with Unique 3 'The Theme' ,The Forgemasters 'The Track With No Name' and LFO 'Frequencies' this was one of the defining tracks of the Northern Bleep movement. The album 'Car Boot Soul' also featured the knock out vocals and keyboards of Sarah Winton. The duo also hosted their own night 'The Downbeat', initially at Rickys, Leeds before moving to the larger Warehouse Club, Leeds. Read more on Last.fm. User-contributed text is available under the Creative Commons By-SA License; additional terms may apply.
FREE SHIPPING ON ORDERS OVER £100 TO UK MAINLAND ONLY
See exclusions
View Cart