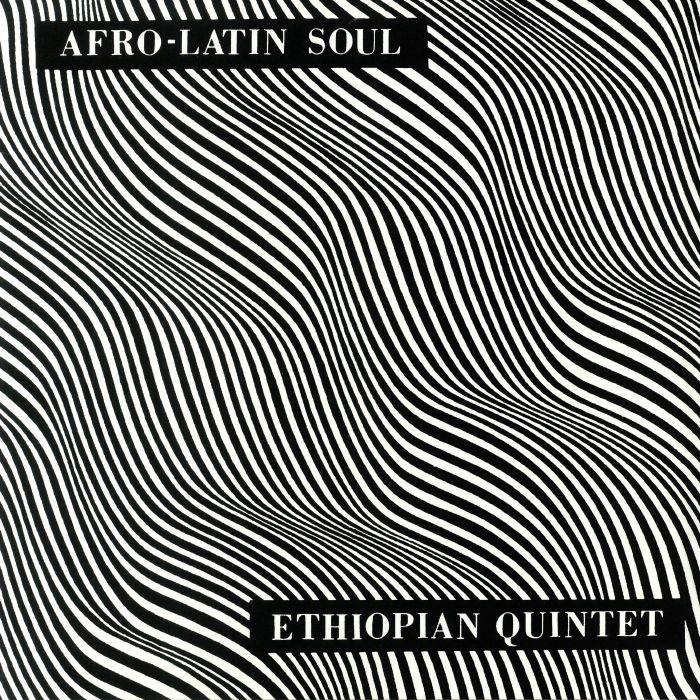 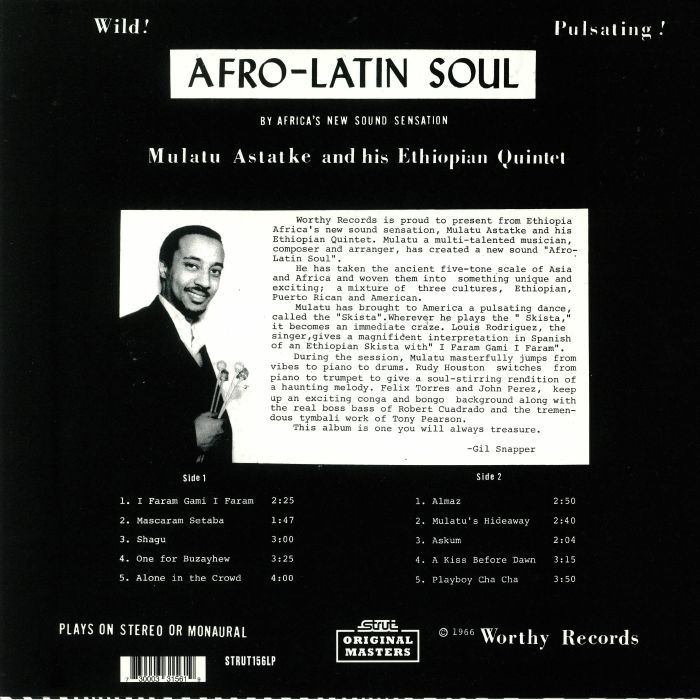 This LP by Astatke (billed to Mulatu Astatke & His Ethiopian Quintet) isn't shaded by nearly as much African/Ethiopian influence as his best work, which was recorded between the late '60s and mid-'70s. As the title might lead you to believe, it is indeed more in the Latin soul-jazz bag than the later material, sometimes leaning toward the R&B-informed boogaloo sound of the mid-'60s. It's not bad at all, though, even if it is more conventional than his best stuff. And particularly on his own compositions and arrangements (which comprise about half the LP), sometimes more exotic and African colors bubble closer to the surface, as on the eerie vibe parts he lays on "Mascaram Setaba." Occasional animal noises give the impression, whether intended or not, of a Martin Denny with more soul. He also proves himself competent at fairly straight jazz balladry on "A Kiss Before Dawn" and more mainstream Latin jazz on "Playboy Cha Cha," though these bear less of his individual stam

Mulatu Astatke [ሙላቱ አስታጥቄ] (born on December 19, 1943; surname sometimes spelled Astatqé on French-language releases: Mulatu Astatqé) is an Ethiopian musician and arranger best known as the father of Ethio-jazz. Born in the western Ethiopian city of Jimma, Mulatu was musically trained in London, New York City, and Boston where he combined his jazz and Latin music interests with traditional Ethiopian music. Astatke led his band while playing vibraphone and conga drums—instruments that he introduced into Ethiopian popular music—as well as other percussion instruments, keyboards and organ. His albums focus primarily on instrumental music, and Astatke appears on all three known albums of instrumentals that were released during Ethiopia's Golden ’70s. Astatke's family sent the young Mulatu to study engineering in Wales during the late 1950s. Instead, he earned a degree in music through studies at the Welsh Lindisfarne College and then Trinity College of Music in London. In the 1960s, Astatke moved to the United States, where he became the first African student to enroll at Boston's prestigious Berklee College of Music, where he studied vibraphone and percussion. While living in the US, Astatke became interested in Latin jazz and recorded his first two albums, Afro-Latin Soul, Volumes 1 & 2, in New York City in 1966. The records prominently feature Astatke's vibraphone, backed up by piano and conga drums playing Latin rhythms, and were entirely instrumental, with the exception of the song "I Faram Gami I Faram," which was sung in Spanish. Though these records are almost indistinguishable from other Latin-jazz records of the period, some tracks foreshadow elements of Astatke's later work, and he is credited as having established conga and bongo drums as common elements in Ethiopian popular music. In the early 1970s, Astatke brought his new sound, which he called Ethio-jazz, back to his homeland while continuing to work in the US. He collaborated with many notable artists in both countries, arranging and playing on recordings by Mahmoud Ahmed, and appearing as a special guest with Duke Ellington and his band during a tour of Ethiopia in 1973. During this time, Astatke recorded another album in New York, Mulatu of Ethiopia (1972). Meanwhile, the bulk of his recorded material was being released on Amha Eshèté's eponymous Ethiopian label Amha Records in Addis Ababa, which released several Mulatu Astatke singles along with the 1974 album Yekatit Ethio-Jazz and six out of the 10 tracks on that year's Ethiopian Modern Instrumentals Hits compilation. Astatke's records appeared alongside releases by notable Ethiopian vocalists Mahmoud Ahmed, Tlahoun Gèssèssè, Alèmayèhu Eshèté, and others, all of whose music was influenced by the infusion of American jazz and Latin instrumentation that Astatke brought to Ethiopia. By 1975, Amha Records had ceased production after the Derg military junta forced the label's owner and many other Ethio-jazz luminaries to flee the country. Astatke stuck around long enough to play vibes for Hailu Mergia and the Wallias Band's 1977 album Tche Belew (which featured the original classic "Musicawi Silt") before the Wallas also left Ethiopia to tour internationally. But by the 1980s, Astatke's music was largely forgotten outside of his homeland. By the early 1990s, many record collectors had rediscovered the music of Mulatu Astatke and were combing stashes of vinyl for copies of his 1970s releases. In 1998, the Parisian record label Buda Musique began to reissue many of the Amha-era Ethio-jazz recordings on compact disc as part of the series ethiopiques, and the first of these reissues to be dedicated to a single artist was Éthiopiques Volume 4: Ethio Jazz & Musique Instrumentale, 1969–1974, Mulatu Astatke. The album brought Astatke's music to a new international audience, perhaps the largest in his career. His Western audience expanded even further when the 2005 Jim Jarmusch film Broken Flowers featured seven of Astatke's songs, including one performed by Cambodian-American rock band Dengue Fever. National Public Radio used Astatke's instrumentals as beds under or between pieces, notably on the program This American Life. Hip hop artists have also sampled Astatke's songs extensively, samples can be heard in the works of for example Nas, Damian Marley, Kanye West, Cut Chemist, Quantic, Madlib, Oddisee, and Knaan. After meeting the Massachusetts-based Either/Orchestra in Addis Ababa in 2004, Mulatu began a collaboration with the band with performances in Scandinavia in summer 2006 and London, New York, Germany, Holland, Glastonbury (UK), Dublin, and Toronto in 2008. In the fall of 2008, he collaborated with the London-based psyche-jazz collective The Heliocentrics on the album Inspiration Information Vol. 3, which included re-workings of his earlier Ethio-jazz classics with new material by the Heliocentrics and himself; Mulatu Astatke & The Heliocentrics. In 2008, Mulatu completed a Radcliffe Institute Fellowship at Harvard University, where he worked on modernizations of traditional Ethiopian instruments and premiered a portion of a new opera, The Yared Opera. Mulatu also served as an Abramowitz Artist-in-Residence at the Massachusetts Institute of Technology, delivering lectures and workshops, as well as advising MIT's Media Lab on creating a modern version of the krar, a traditional Ethiopian instrument. On February 1, 2009, Mulatu Astatke performed at the Luckman Auditorium in Los Angeles with a band that included such notable jazz musicians as Bennie Maupin, Azar Lawrence, and Phil Ranelin. Mulatu also released a two-disc set to be sold exclusively to passengers of Ethiopian Airlines, with the first disc being a compilation of the different styles from different regions of Ethiopia and the second being studio originals. On May 12, 2012, Mulatu received an honorary doctor of music degree from the Berklee College of Music. Read more on Last.fm. User-contributed text is available under the Creative Commons By-SA License; additional terms may apply.
FREE SHIPPING ON ORDERS OVER £100 TO UK MAINLAND ONLY
See exclusions
View Cart