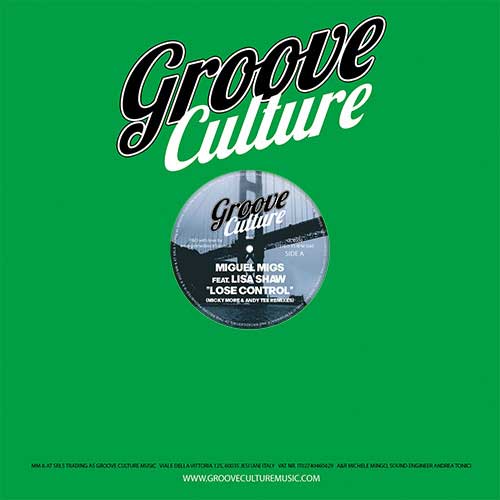 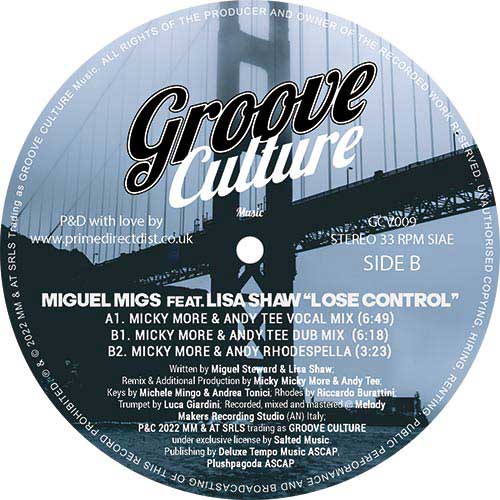 First up on the flip, a dub version for the dancefloor featuring an infectious piano and bass groove. The package ends with the B2 a rhodespella version played by maestro Riccardo Burattini who wrote an emotional arrangement for Lisa Shaw's voice. All in all, a timeless record and a must hav

Miguel Migs (real name Michael Steward, also known by the pseudonym Petalpusher) is a Deep House Disc jockey and producer from San Francisco, California. Migs began his music career at 18 years old, as a lead guitarist Hermes and songwriter for a Santa Cruz local band called Zion Sounds. The band split up in the mid-1990's, however Zion Sounds' African and Jamaican style is said to have been a major influence in Migs' personal career. After the band dissolved, Miguel Migs went on to explore electronic music production. Miguel has produced over 100 remixes to date, including remixes for a number of mainstream artists. Such artists include Britney Spears, Macy Gray and Lionel Richie. Migs has been associated with a variety of record labels, most notably Naked Music Recordings. In 1998 Miguel co-founded the deep house record label Transport Recordings, along with fellow DJ MFR and Naked Music label director Bruno Ybarra. According to a 2004 article by Stephen Thanabalan in DJ Magazine, Migs was credited for his soul-driven vibes and hailed as one of the pioneers of the nascent house and chill-out revival scene alongside Dimitri from Paris and Bob Sinclair as a result of his early foray into Deep House in the late 1990s and early 2000s, releasing several highly sought after singles and remixes under the Petalpusher pseudonym. Most recently, in 2005, he founded Salted Music, a record label under Om Records. Miguel Migs stands at the forefront of electronic music's soulful realm. Whether tackling his original productions or remixes, he achieves an organic-soulful sound by combining the best of both the electronic music world and live instrumentation. For many years, Miguel's productions have been included on countless compilations and his records have slid into the crates of top DJs across the globe. His music has also landed on numerous TV Shows, including Six Feet Under, Sex in the City, and MTV's Road Rules and Real World. Contrary to many of his club-centric DJ/producer peers, Miguel is not always concerned with the potential dance floor appeal of his soulful tracks. "It's music you can enjoy and listen to at home, in the club, or anywhere. Not necessarily just to rock the dance floor." explains the Northern California native, who grew up with a true love of reggae, soul, classic rock, jazz, hip-hop and just about everything else. His impressive discography includes more than 100 original productions and remixes on seminal independent labels such as Salted Music, Naked Music, Astralwerks, Yoshitoshi, NRK, Black Vinyl, Large, Chez, Transport Recordings, Om Records, Defected Records and many others. His recordings have consistently made waves in the underground circuit and have landed on DJ hype charts internationally. He is highly regarded when it comes to remixes, having worked with major label artists such as Macy Gray, Lionel Ritchie and Britney Spears. Miguel additionally has released numerous mix CD compilations on labels including Defected, Naked Music, Southport Weekender and NRK. Never one to sit still, Migs started his own label Salted Music in 2004. Having been associated with an extensive number of labels throughout his career, he came to realize a desire to have his own base, a vehicle for building his own catalogue of quality material. Salted Music is a foundation for Migs to choose and release music that inspires him, as well as release his own productions and compilations. Migs wrote and recorded an album (Those Things), released a remix album (Those Things Remixed) put together a new live act and toured with his band Petalpusher, continued to tour all over the world full time as a DJ, worked on his label, and of course, there’s his beloved ‘67 Chrysler Newport convertible and other life things to take care of, too. With Salted’s catalogue growing at a rapid pace there’s now a wealth of great material to share with the fans - leading us to the August 25 release of Get Salted Volume 2 (09). As a producer, Miguel realizes a strong connection between his electronic music productions and live musical background. He writes his own lyrics and plays his own instruments, be it guitar, bass, percussion or keyboard. As a DJ, Miguel was recognized and nominated for best DJ in the 2004 House Music Awards held in London. Migs maintains the same approach to his sets as to his productions, combining a variety of influences and styles fused together. The result is funky, deep, soulful, bumping house music. "I like to mix it up and keep it moving smoothly, taking the dance floor through a very spontaneous mix into the realms of quality, deep house music depending on the mood in the room", says Migs. "But, whether it's vocal, tracky, dubby, moody, percussive or broken beat, the sound always remains soulful and funky. Is a musical God. Read more on Last.fm. User-contributed text is available under the Creative Commons By-SA License; additional terms may apply.

Lisa was born in Toronto, Canada, and has been singing live and recording in New York City for the last twelve years, collaborating with producers such as Jay Denes, Eric Stamile, Dave Warrin, Scott Hardkiss, Smash Hunter, and Swingsett. She has also been remixed by names such as Jimpster, Herbert, Joey Negro, Swag & Crazy Penis, and Phil Asher. Since 1994 she has released music with Naked Music, Ubiquity, Yoshi Toshi, RCA, East West, Grand Central UK, Sirkus UK, Astralwerks and NRK. Lisa’s first contribution to the Naked sound was “You are Love” by Lovetronic and after many collaborations with Naked artists and producers - Blue Six, Central Living, Petalpusher, Aquanote - she signed as a solo artist in 2001. Her debut single for Naked Music was the worldwide underground classic “Always”. Lisa has received rave reviews and features in The New York Times, CMJ, Muzik, URB, The Canadian National Post, Billboard, XLR8R and many others. She has also performed live on The David Letterman Show as a backing vocalist for Jewel. Madonna paid tribute to “Always” in Rolling Stones and proclaimed Lisa to be “So Cool!” Throughout her career, she's played and recorded in a diverse range of musical styles, ranging from deep house, avant-garde hip-hop, trip-hop, acoustic soul and drum and bass. She also performed live at the Prohibited Beatz party with Nerve, a fusion band led by drummer/producer Jojo Mayer where Takuya Nakamura (Organic Grooves/Ism), Tim Lefevbre and DJ Swingsett also appeared. Lisa has also collaborated with Itaal Shur, Lucy Woodward & Mark Anthony Jones. Over the last three years Lisa has performed live throughout Europe, Asia, Australia and the US with label-mate Miguel Migs, as well as working on her debut solo album with producers Eric Stamile (Speakeasy), Jay Denes (Blue Six) and co-writer Dave Warrin. This is scheduled to be released the summer of 2005. She is currently putting together a live outfit called Pedal Pusher with Miguel Migs for touring next year, but will continue to do her live PAs with Miguel as well. There are many new projects and collaborations in store for Lisa over the next few years. Much, much more music to come. Read more on Last.fm. User-contributed text is available under the Creative Commons By-SA License; additional terms may apply.
FREE SHIPPING ON ORDERS OVER £100 TO UK MAINLAND ONLY
See exclusions
View Cart