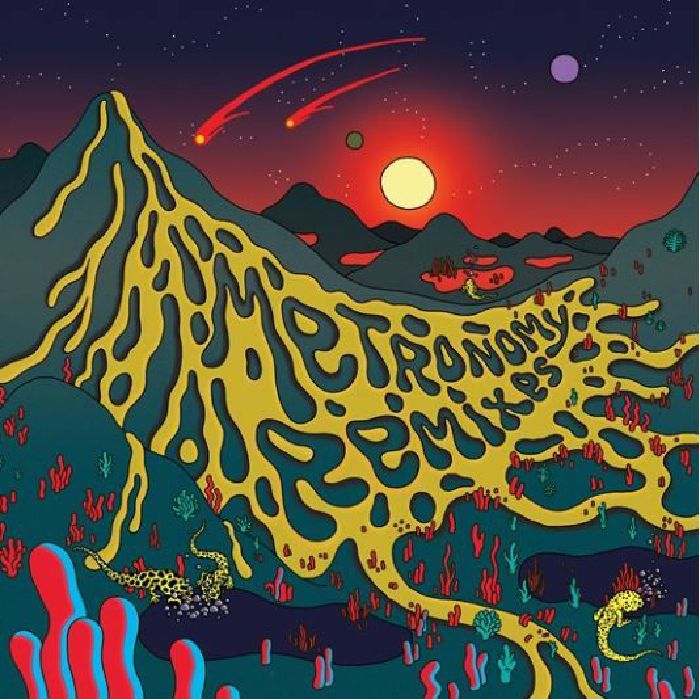 - NEW RELEASE
Sorry, this item is currently unavailable.
ARTIST:
Metronomy
TITLE:
Metronomy Forever Remixes
LABEL:
Because
CATNO:
5650681
STYLE:
Synth-pop / Downbeat Electronica / Downbeat Electronica / Synth-pop /
FORMAT:
Vinyl record
DESCRIPTION:
For RSD 2020 - 5 Remixes of tracks Taken from Metronmy Self Titled LP - Best remixes from the current Metronomy Forever campaign onto a 12” including Idles take on Wedding Bells, the Bristol band’s first official remix created for another artist. Dubbed the ‘Til Dev Do Us Party Remix’, Idles' reinvention of Wedding Bells came from the long-running mutual respect that Metronomy and Idles share. The original’s driving bass is pushed to a pulsating new peak, while the distortion layered on Joe Mount’s vocals increase the track’s tension. The result is manic, energising and surprisingly uplifting.

Next up is Michael Mayer’s What IZ Love remix of Insecurity where we see the co-owner of the Kompakt label reinvent the original track as a sprawling 8-minute techno exploration. Then we have interdisciplinary audio-visual artist Anna Lann who applies some audacious experimentation to her remix of Salted Caramel Ice Cream. Mount’s topline is twisted beyond all recognition and layered with skittering beats and foreboding vibes, making for a waking nightmare.

Hotly-tipped Domino artist, Georgia, who looks set to make a major breakthrough in 2020 delivers her playful mix of Wedding Bells, heightening the track’s innate sense of fun, going big in every way - imposing synths undercut by seismic bass and hyperactive percussion. Finally we have Gerd and Shans mix of Lately, bringing a ‘90s flavour to the track, with old school house stabs reframing Metronomy as big room floor-fillers.

Metronomy is an electropop group which formed in 1999 in Totnes, Devon, United Kingdom, originally as the solo project of Joseph Mount. The project later expanded into a full band, which currently consists of Joseph Mount (vocals, keyboards, guitar), Oscar Cash (keyboards, saxophone, vocals), Gbenga Adelekan (bass, vocals) and Anna Prior (drums, vocals). The band has released five albums: "Pip Paine (Pay The £5000 You Owe)" (2006), "Nights Out" (2008), "The English Riviera" (2011), "Love Letters" (2014) and "Summer 08" (2016). Metronomy began in the tiny, bohemian market town of Totnes, Devon, when Joseph’s Dad sold his son a computer so he could sit in his bedroom and make electronic music. He was inspired by the likes of Autechre, LFO and Aphex Twin, more as a creative hobby than a pop masterplan. After decamping to Brighton for Uni, Metronomy released their debut album in June 2006. It was called Pip Paine (Pay The £5000 You Owe), and its obtuse but fascinating, largely instrumental electro-pop reflected the eccentricity of its title, and the enduring influence of Totnes. Joseph admits that he only, finally, saw the commercial possibilities of Metronomy when DJ, producer, Trash founder and electro-punk avatar Erol Alkan began to feature the single You Could Easily Have Me in his sets, and asked Metronomy to play at his club. Cue the need for a proper live show, and the additions of Gabriel Stebbing, Oscar Cash, dance routines and clothes that blink. Move on 2 years and Nights Out a wonky love-child of Giorgio Moroder, New Order, Pet Shop Boys and Unfinished Sympathy is a second album that feels like a debut. The first to be vocal-led, with the self-effacing Joseph stepping up and grabbing the mic for most of the tracks; and, crucially, the first to introduce Metronomy as a fully live propsition, rather than a pseudonym for Joseph‘s solo work. As Metronomy’s busy touring schedule built a buzz amongst kids who instinctively get the dance/art crossover, In April 2009 the Metronomy show took another leap in its evolution, with the addition for the first time of a live drummer in Anna Prior, and bassist Gbenga Adelekan. The new Metronomy was completely live, proving it is possible for electronic bands to put on show as authentic as any rock band. Meanwhile Joseph has embarked on a series of prestigious remixes for the likes of Klaxons, Franz Ferdinand, Gorillaz and collaborations with Kate Nash and Florence and The Machine. Metronomy produced part of the highly acclaimed Roots Manuva album Slime and Reason. Read more on Last.fm. User-contributed text is available under the Creative Commons By-SA License; additional terms may apply.
FREE SHIPPING ON ORDERS OVER £100 TO UK MAINLAND ONLY
See exclusions
View Cart