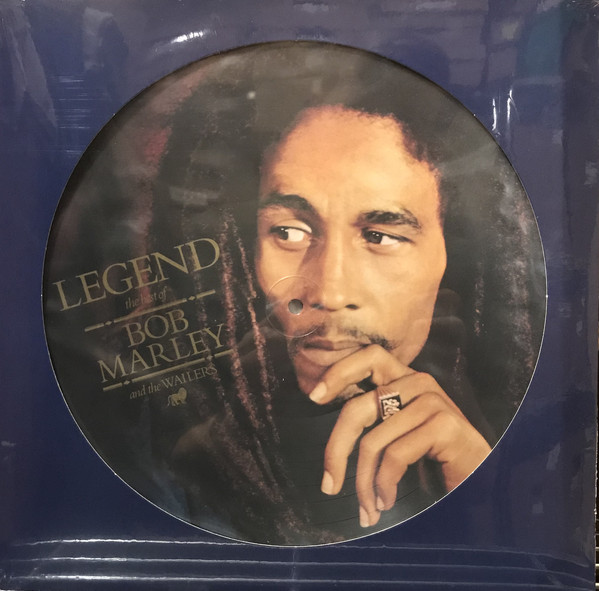 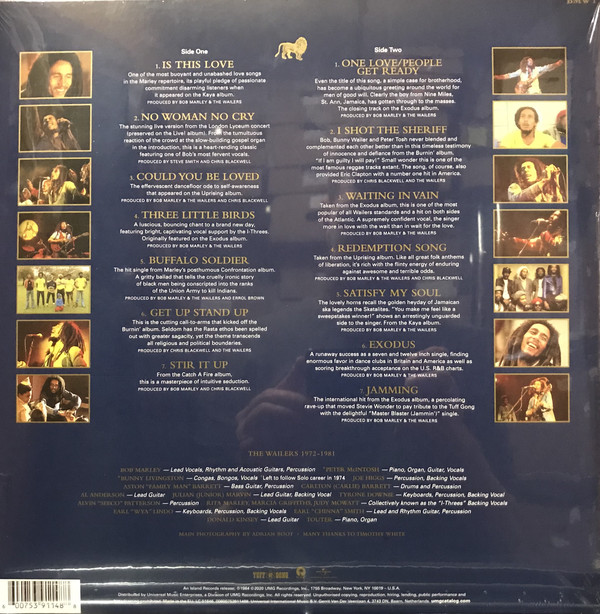 - NEW RELEASE
Sorry, this item is currently unavailable.
ARTIST:
Marley, Bob
TITLE:
[Pic] Legend - The Best Of Bob Marley & The Wailers
LABEL:
Tuff Gong, Island Records
CATNO:
5391148
STYLE:
Reggae /
FORMAT:
Vinyl record
DESCRIPTION:
Ltd Edition Picture Disc - The classic Marley album, the one that any fair-weather reggae fan owns, Legend contains 14 of his greatest songs, running the gamut from "I Shot the Sheriff" to the meditative "Redemption Song" and the irrepressible "Three Little Birds." Some may argue that the compilation shortchanges his groundbreaking early ska work or his status as a political commentator, but this isn't meant to be definitive, it's meant to be an introduction, sampling the very best of his work. And it does that remarkably well, offering all of his genre-defying greats and an illustration of his excellence, warmth, and humanity. In a way, it is perfect since it gives a doubter or casual fan anything they could want. Let's face it, the beauty and simplicity of Marley's music was as important as his message, and that's captured particularly well here.

Bob Marley (February 6, 1945 – May 11, 1981), born Nesta Robert Marley which was later to be changed by passport officials to Robert Nesta Marley, was a Jamaican singer-songwriter, guitarist, and activist. He was the most widely known writer and performer of Reggae, and more specifically Roots Reggae. He is famous for popularising the genre outside of Jamaica and the Caribbean. Much of his music dealt with the struggles of the spiritually wealthy rasta and/or spiritually powerful Jah Rastafari. Starting out in 1963 with the group Bob Marley & The Wailers, he forged a distinctive song-writing and vocal style that would later resonate with audiences worldwide. The Wailers would go on to release some of the earliest reggae records with producer Lee Scratch Perry. After The Wailers disbanded in 1974, Marley pursued a solo career which culminated in the release of the album Exodus in 1977 which established his worldwide reputation and became one of the world's best-selling artists of all time, with sales of more than 75 million albums and singles. Bob Marley was a member of this Rastafari movement, whose culture was a key element in the development of reggae. Bob Marley became the leading proponent of the Rastafari, taking their music out of socially deprived areas of Jamaica and onto the international music scene. Now considered a "Rasta" prophet, Marley's adoption of the characteristic Rastafarian dreadlocks and famous use of marijuana as a sacred sacrament in the late sixties were an integral part of his persona. He is said to have entered every performance proclaiming the divinity of Jah Rastafari. A few months before his death, Marley was baptised into the Ethiopian Orthodox Church and took the name Berhane Selassie (meaning the Light of the Holy Trinity in Amharic). His best known songs are a mixture of reggae, Roots Reggae, and rhythm and blues, which include: I Shot the Sheriff Exodus Could You Be Loved Redemption Song No Woman, No Cry Three Little Birds Buffalo Soldier Is This Love One Love Stir It Up Jammin' Get Up, Stand Up His posthumous album Legend (1984) became the best-selling reggae album ever, with sales of more than 12 million copies. Bob Marley was posthumously inducted into the Rock and Roll Hall of Fame in 1994; in December 1999, his album “Exodus” (1977) was named Album of the Century by Time Magazine and his song “One Love” was designated Song of the Millennium by the BBC. Awards and Honors: 1976 - Rolling Stone Magazine's "Band of the Year" 1978 - United Nations' Peace Medal of the Third World 1981 - Jamaican Order of Merit 1994 - The Rock And Roll Hall Of Fame 1999 - Time Magazine's Best Album of the Century 2001 - Star at the Hollywood Walk of Fame 2001- GRAMMY Lifetime Achievement Award 2004 - Rolling Stone's 100 Greatest Artists of All Time (#11) 2006 - The United Kingdom's "Blue Plaque" 2006 - Bob Marley Boulevard named in Brooklyn, New York 2010 - GRAMMY Hall Of Fame (Catch A Fire) 2012 - August the 7th, proclamed Bob Marley Day (Los Angeles) 2013 - GRAMMY Tribute Performance Marley tragically died of cancer at Cedars of Lebanon Hospital in Miami, Florida on May 11, 1981. Religion: Bob Marley was a member of the Rastafari movement, (not rastafaranism as that is seen as a derogortory term as Rasta's don't like being refered to as an ism) whose culture was a key element in the development of reggae music in Jamaica. Rastas belive they are outcast from their native Zion and looked on Ethiopia as their real home and Tafarai Makonnen, who took the title Haile Sellasie I(Power of the Holy Trinity in Amharic), after he became the emperor of Ethiopia, as their leader. Rastas belive H.I.M. is Jesus in flesh. Rastas are considered to be black Jews. Rastas claim their root from King Solomon and Abbysinian queen of Sheba, through lineage of their son Menelik, emperor of Abbysinia. H.I.M. is said to be a direct decendant of Menelik. 'Ras' means Head and 'Tafarai" means Creator. 'Jah' is the shortened form of the Hebrew word Jehovah. Rastas belive in one truth and that is the truth of His Imperial Majesty, Emperor Haile Sellasie I, King of kings, Lord of lords, conquering Lion of the tribe of Judah, two hundred and twenty-fifth ruler of the three thousand year old Ethiopian empire, elect of Jah, Light of the world. Jah Rastafari live out. Rastas preach a non-materialistic, egalitarian way of life. Bob Marley became a leading proponent of the Rastafari, taking their music out of the socially deprived areas of Jamaica and onto the international music scene. Bob Marley was baptized by the Archbishop of the Ethiopian Orthodox Christian Church in Kingston, Jamaica on November 4, 1980. Diet: Marley's diet was ital; fruit, vegetables and fish; which is food approved by the Rastafari movement. Family: Bob Marley had 13 children: three with his wife Rita Marley, two adopted from Rita's previous relationships, and the remaining eight with separate women. His children are, in order of birth: Imani Carole, born May 22, 1963, to Cheryl Murray; Sharon, born November 23, 1964, to Rita in previous relationship; Cedella born August 23, 1967, to Rita; David "Ziggy Marley", born October 17, 1968, to Rita; Stephen Marley, born April 20, 1972, to Rita; Robert "Robbie", born May 16, 1972, to Pat Williams; Rohan, born May 19, 1972, to Janet Hunt; Karen, born 1973 to Janet Bowen; Stephanie, born August 17, 1974; according to Cedella Booker she was the daughter of Rita and a man called Ital with whom Rita had an affair; nonetheless she was acknowledged as Bob's daughter; Julian Marley, born June 4, 1975, to Lucy Pounder; Ky-Mani Marley, born February 26, 1976, to Anita Belnavis; Damian Marley, born July 21, 1978, to Cindy Breakspeare; Makeda, born May 30, 1981, to Yvette Crichton. See here for comedian Bob Marley the comedian: Comedian Bob Marley Read more on Last.fm. User-contributed text is available under the Creative Commons By-SA License; additional terms may apply.
FREE SHIPPING ON ORDERS OVER £100 TO UK MAINLAND ONLY
See exclusions
View Cart