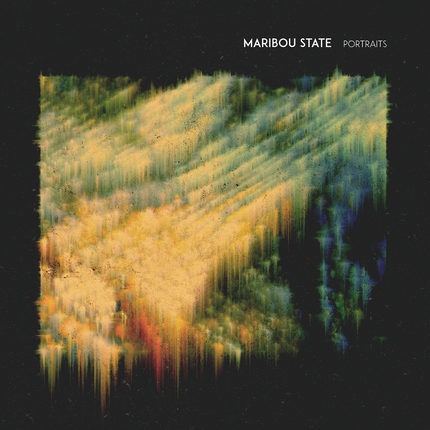 On first listen, U.K. duo Maribou State seem like another sad-robot James Blake clone, mixing downtrodden post-dubstep beats with melancholy pitch-shifted vocals. However, the multilayered compositions of debut full-length Portraits prove that they're much more than that. The duo's mostly midtempo tracks feature busy yet restrained production, creatively constructing moody beatscapes with subtly manipulated rhythms and unexpected samples. The grainy guitars and synths give the songs a rough edge, keeping them from sounding too flashy, and contributing to the album's slightly strange aura. The sour bass synth during "The Clown" sounds a bit jarring at first, but becomes addictive on repeated listens. The duo take several approaches with their use of vocals, disguising them in effects as well as letting them ring out clearly, especially on the songs with guest vocalists Holly Walker and Jono McCleery. Even on these songs, they blend the straightforward

Maribou State is Chris Davids and Liam Ivory from Hertfordshire. Liam asked Chris to play bass for his band. When they moved up north to go to university, the band fell by the wayside and the pair began making electronic music in their home studio, forging a partnership that would soon become Maribou State. In the summer of 2011 they were scouted by Fat! Records and put out their debut release, the 'Olivia' EP, which set a blueprint for Maribou State's trademark bass-heavy, melodic sound. Grassroots support for the duo was also building. When they brought out a bootleg of Lauryn Hill's 'Doo Wop' (produced in collaboration with Pedestrian), the tune racked up thousands of plays on YouTube and got airtime on Radio 1, 1Xtra and XFM courtesy of Diplo, B. Traits and Eddy Temple Morris respectively. Their first project for Southern Fried was a remix of 'Hummus' by Crookers, which hit the top of the Hype Machine chart during the spring of 2012. Then the 'Native' EP dropped in June and one of the tracks from it, 'The Look', was promptly given 10/10 and awarded Tune Of The Month by Mixmag. Along with underground fans, key tastemakers were beginning to take note. Momentum continued when, after a summer spent playing shows, the next single for Southern Fried was released. 'Scarlett Groove' (featuring Saint Saviour) was a certified off-kilter pop hit, notching up radio play from Annie Mac and Lauren Laverne as well as being given Essential Tune status by Pete Tong. It was an excellent way to round off 2012, a year made all the nicer when Maribou State's remix of Ultraista's 'Gold Dayzz' went viral, plonking the pair at the top of the Hype Machine chart once again and hitting over 200,000 plays on SoundCloud. Their first major release of this year was another collaboration with Pedestrian. Signed by Polish house duo Catz 'N Dogz and put out via their Pets imprint, 'Mask' pushed Maribou State firmly to the fore of the British scene, running alongside Disclosure, Bondax and AlunaGeorge as artists dedicated to making accessible yet highly inventive dance music. The record also gained further radio play from Zane Lowe, Hugh Stephens and Rob Da Bank, as well as long-time supporters Annie Mac, B. Traits and Pete Tong. As 2013 began to unfurl, Chris and Liam will release their latest single for Southern Fried, a record that marks the next stage of their career. A double-A side including 'Tongue' and 'Larks Rise', it sees them realise their vision of creating organic dance music in the same kind of way as Bonobo and Four Tet, forging field recordings and live instrumentation with broken house rhythms and waves of sub-bass. http://mariboustate.tumblr.com Read more on Last.fm. User-contributed text is available under the Creative Commons By-SA License; additional terms may apply.
FREE SHIPPING ON ORDERS OVER £100 TO UK MAINLAND ONLY
See exclusions
View Cart