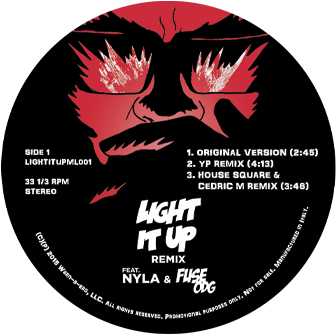 MAJOR LAZER - LIGHT IT UP

Years after the zombie apocalypse ravaged the galaxy, Major Lazer went into isolation after bringing peace and order to Earth. With the help of a mysterious shadow government called Cinco he was cryogenically frozen as a safeguard for the future’s wellbeing. Despite a great many years of pursuing peace on the planet, a new threat began to loom on the horizon and the commando was brought out of sleep by the Committee of Five. This intergalactic group faced an opponent that only Major Lazer could defend against: his former superior and commander General Rubbish. Rubbish had come out of deep space hiding with a new weapon...Terror Lazor and was set out to enslave and capture all of Earth's allies to seize inter-galactic planetary control and then destroy Earth. With dwindling resources to defend Earth and its allies, the Committee of Five brought Major Lazer out of cryogenic slumber. He was assigned a partner, the female assassin known only as Knife Fight. Together they set out to FREE THE UNIVERSE, beginning on the fortuitous date of April 15th, 2013. Since 2011, the group consists of Diplo, Jillionaire and Walshy Fire After releasing their landmark LP Guns Don't Kill People...Lazers Do in 2009, the heroic production duo of Diplo and Switch found themselves boldly marching forwards toward the end of the aughts, conquering major milestones. From 2009 to 2011, the twosome toured extensively across the United States and the world, selling out shows and performing at some of music’s major festivals, including Coachella, Pitchfork, Sasquatch, Outside Lands, and Falls Music & Arts Festival. In 2010, Major Lazer released Lazerproof, a free download mixtape with pop sensation La Roux, and Lazers Never Die, an EP featuring two new tracks and three remixes, including one by Thom Yorke. One of the foremost breakthroughs for Major Lazer during this time was the production collaboration with Beyoncé on her single “Run the World (Girls)”, which sampled their track “Pon de Floor." BeyoncÉ directly sought out Switch and Diplo, recognizing the fact that they were creating authentically innovative music and further cementing their status as a production team worthy of worldwide mainstream attention. As 2011 turned to 2012, Switch determined it best to pursue his own path, leaving Diplo in full control of Major Lazer. As the sole executive producer of Major Lazer, Diplo continued to spearhead the current dancehall revival movement with the 2013 release Free The Universe. That album included collaborations with Bruno Mars, Tyga, Flux Pavilion, Wynter Gordon, Shaggy, Wyclef Jean, Ezra Koening from Vampire Weekend, Dev and more. Spin called the LP’s first single "Get Free" featuring Amber Coffman of Dirty Projectors, "a meeting point between Jamaica, West Africa, and Brooklyn." Diplo (AKA Wesley Pentz) has risen through the ranks and has asserted himself as one of the most pioneering producers of the time. Through unending curiosity and exploration of the vast multitudes of the world’s musical heritages, Diplo has managed to seamlessly connect the global underground to the audio mainstream. He is the Grammy-nominated founder, owner and head honcho of Mad Decent records, which has not only garnered widespread critical and audience accolades since its inception, but has also deservedly earned a hefty reputation as a vanguard of groundbreaking releases. As Major Lazer, he retreated to Jamaica in 2012 to team up with producers Ariel Rechtshaid and Dre Skull on Snoop Lion's (Snoop Dogg) 2013 album "Reincarnated". Major Lazer was also featured on the title track from No Doubt's 2012 comeback album with famed dancehall artist Busy Signal and released an official remix for Hot Chip’s "Look At Where We Are". Read more on Last.fm. User-contributed text is available under the Creative Commons By-SA License; additional terms may apply.

OTHER RELEASES ON AAA RECORDINGS OR BY MAJOR LAZER:

We have many other items in stock by Major Lazer and on the label AAA Recordings.