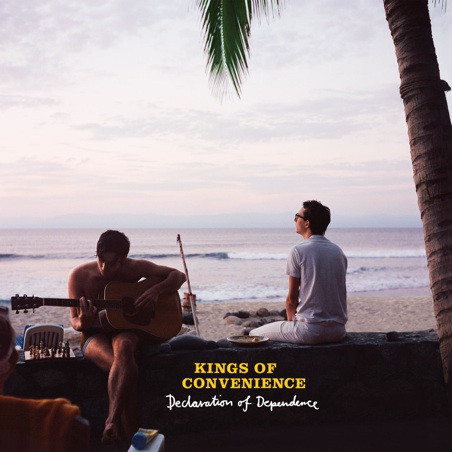 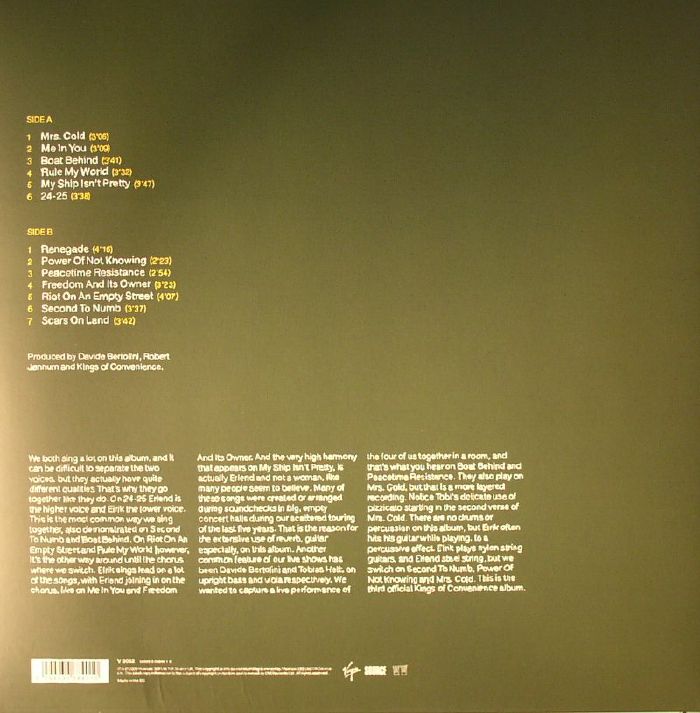 KINGS OF CONVENIENCE - DECLARATION OF DEPENDENCE

- NEW RELEASE
Sorry, this item is currently unavailable.
ARTIST:
Kings Of Convenience
TITLE:
Declaration Of Dependence
LABEL:
Virgin
CATNO:
V3062
STYLE:
Downtempo / Folk / Downtempo / Folk /
FORMAT:
Vinyl record
DESCRIPTION:
Downtempo Folk Edged Bliss from Kings of Convenience. In the five years since their last record, the duo of Erlend Øye and Erik Glambek Bøe have each been busy, Øye with DJ gigs and his other band the Whitest Boy Alive, and Bøewith his day job and fighting Clear Channel in their hometown of Bergen, Norway.

Getting back into Kings of Convenience mode sounds like it was as easy as putting on a fresh pair of socks. Their third album, Declaration of Dependence, sounds like it could have been recorded at the same session as Riot on an Empty Street; it's just as relaxed, mellow, and dreamy. The pair's voices blend like honey and more honey, each of them possessing vocal chords made of cotton candy. They twine their voices around complex but warmer-than-a-Snuggie harmonies on every song; the comparisons to Simon & Garfunkel still hold up, though by now they really sound most like themselves, and not imitators. This album is sparser than the last; there are no guest vocals and very infrequent extra instruments (strings, piano). It gives the proceedings a very intimate sound, between this, the duo's hushed voices, and the peaceful songs, it's even quieter and more subdued than anything they've done so far. The mood of introspective reflection never breaks, and almost becomes unbearably powerful on a track like "My Ship Isn't Pretty." Bøe and Øye pull no punches and spare no emotions, they are skilled veterans who know how to format and pace an album. The only thing the record lacks is a song as catchy as "I'd Rather Dance with You," or any songs with drums. It's not really a problem, though, since the overall effect of the album's melodies adds up to something just as powerful. A few of the songs stand out as possible singles, too, like the bossa nova-y "Mrs. Cold" or the almost peppy anti-war song "Rule My World." The lack of drums isn't much of a problem,either, the acoustic guitars that underpin the songs provide all the rhythmic push they need. Adding drums might have spoiled the introspective and feather-light feel of the record. Anyone who's been on their bandwagon all along will be glad of that, as they'll rejoice that Declaration of Dependence turns out to be another autumnal treasure from the Kings.

Kings of Convenience are an indie folk-pop duo from Bergen, Norway. Consisting of Erlend Øye and Eirik Glambek Bøe, the musical group is known for their delicate tunes, calming voices, and intricately subtle guitar melodies. Both Øye and Bøe sing in their tracks, and both of them compose

PLAY
CUE
MP3
a1
Mrs. Cold
a2
Me In You
a3
Boat Behind
a4
Rule My World
a5
My Ship Isn't Pretty
a6
24-25
b1
Renegade
b2
Power Of Not Knowing
b3
Peacetime Resistance
b4
Freedom And Its Owner
b5
Riot On An Empty Street
b6
Second To Numb
b7
Scars On Land

Kings of Convenience are a music duo formed in Bergen, Norway, playing a style that features acoustic instrumental playing and their two voices. The band consists of Erlend Øye and Eirik Glambek Bøe. They met as children at a geography competition. They are known for their delicate tunes, calming voices, and intricately subtle guitar melodies. After first earning notice thanks to a series of acclaimed European festival appearances during the summer of 1999, the twosome signed to American label Kindercore to issue their lovely eponymous debut the following spring. Quiet Is the New Loud was issued in early 2001 on Astralwerks. The album used many of the same tracks from the Kindercore release but re-ordered them and replaced a few with newer songs. The remix album Versus followed later in the year and featured remixes by artists as diverse as Ladytron, avid Whitaker and Four Tet. After a three year layoff during which Øye recorded a solo album, 2003's Unrest, and gained some reknown as an electronica DJ while Bøe worked on finishing up his psychology degree, the pair teamed up again for the recording and release of 2004's Riot on an Empty Street. After a 5 year layoff, the band released Declaration Of Dependence on October 20, 2009 on Astralwerks in the US and Virgin Records in the UK. Erlend Øye has released some solo material and is also a member of The Whitest Boy Alive. Eirik Glambek Bøe is also a member of a second band, Kommode. The Whitest Boy Alive and Kommode toured together this year for a short period. Read more on Last.fm. User-contributed text is available under the Creative Commons By-SA License; additional terms may apply.
FREE SHIPPING ON ORDERS OVER £100 TO UK MAINLAND ONLY
See exclusions
View Cart