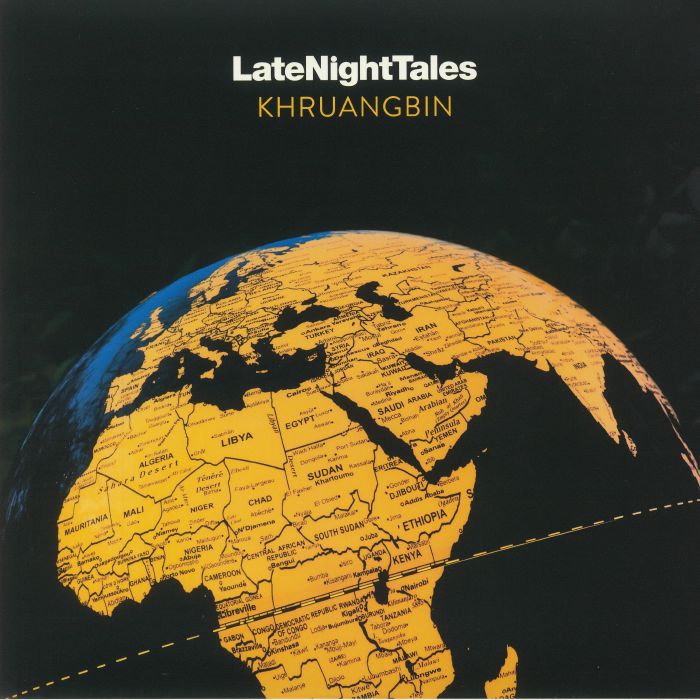 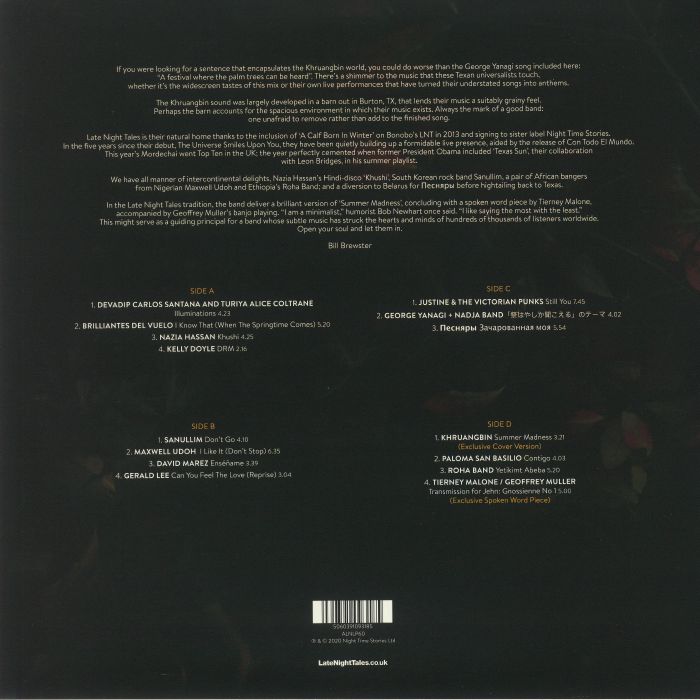 Having first come to prominence in 2013 when producer and D.J. Bonobo included Khruangbin’s ‘A Calf Born in Winter’ in his own collection of songs for the series, the little known Houston trio had yet to release an album, but have since gone on to become international superstars forming their own exotic, individual sound. “The LateNightTales series is such a special thing to be a part of because we wouldn’t have made it if it wasn’t for Bonobo’s LateNightTales, because that’s how we got into the LNT family – and got a break.”

With a mind-blowing selection of tracks that cross borders and cultures, Khruangbin’s deep love of global grooves – from Asian pop to Nigerian reggae – Japanese mellow groove to Latina flavas – are steeped in eclecticism; Nazia Hassan’s Hindi-disco ‘Khushi’, produced by British-Indian legend Biddu, South Korean rock band Sanullim who contribute ‘Don’t Go’, a pair of African bangers from Nigerian Maxwell Udoh and Roha Band, from Ethiopia; a diversion to Belarus for Песняры and thence to Madrid for the strident vocal performance of Paloma San Basilio with ‘Contigo’ before hightailing back to Texas.

“It’s cool to think about what you would listen to late at night, as a band together, lighting a spliff, kinda vibe. We definitely wanted to cover as much global territory as possible; so it was the globe and then home. We wanted to show the treasures from our hometown, or people from our hometown that the rest of the world probably doesn’t know. That’s what makes Khruangbin Khruangbin. The stubbornness about being so hometown-centric but what makes Houston is this this constant international influence. That’s that gulf stream, bringing it right into Houston. So I guess that’s kind of the theme.”

The LateNightTales series was established back in 2001 with Fila Brazilia taking to the controls and mixing up the first of what would continue to be the first choice of music connoisseurs worldwide. Since then, the series has seen releases from the likes of The Flaming Lips, Hot Chip, Floating Points, David Holmes, Bonobo, Jon Hopkins, Röyksopp and many more.

Khruangbin is a three-piece band from Texas, formed of Laura Lee on bass, Mark Speer on guitar, and Donald Johnson on drums. The trio's first single 'A Calf Born In Winter' was released in May 2014 by Late Night Tales offshoot Night Time Stories, and saw support from DJs Zane Lowe, Cerys Matthews, Tom Ravenscroft, Gideon Coe and magazines as musically diverse as Test Pressing, For Folks Sake, i-D, The 405 and Ransom Note. 'The Infamous Bill' is an expanded offering of Khruangbin's exotic, individual sound. The EP's four tracks were recorded at their spritual home, a remote barn deep in the Texas countryside where Khruangbin's first rehearsals took place. Taking influence from 1960's Thai funk - Khruangbin literally translates to "Engine Fly" in Thai - the EP is steeped in the bass heavy, psychedelic sound of their inspiration, Tarantino soundtracks and surf-rock cool. Mark and DJ's roots are in R&B, hip hop and gospel having played within the same gospel band for years. Both professional musicians, Mark began teaching Laura how to play bass in the summer of 2009. As such, Laura quickly developed a huge passion for the instrument and the aesthetic it brought to music she loved. Having worked studiously on developing her skills, both Mark and Laura were invited to tour with Ninja Tune's YPPAH supporting Bonobo across his 2010 American tour. The tour galvanised the two of them to start making music together more seriously, sowing the first seeds of Khruangbin, with DJ the natural go to for drums. Having kept in touch, Bonobo included Khruangbin's 'A Calf Born In Winter' on his 2013 'Late Night Tales' compilation. In addition to increasing the Stateside following the band has built, the release has helped Khruangbin in topping both the US & UK 'Last FM' fastest growing artists whilst 'A Calf Born In Winter' continues to be one of the most popular single downloads from the compilation. Read more on Last.fm. User-contributed text is available under the Creative Commons By-SA License; additional terms may apply.
FREE SHIPPING ON ORDERS OVER £100 TO UK MAINLAND ONLY
See exclusions
View Cart