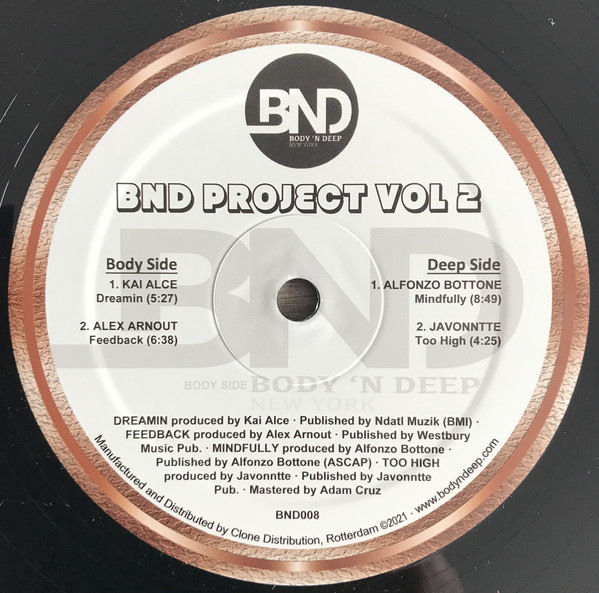 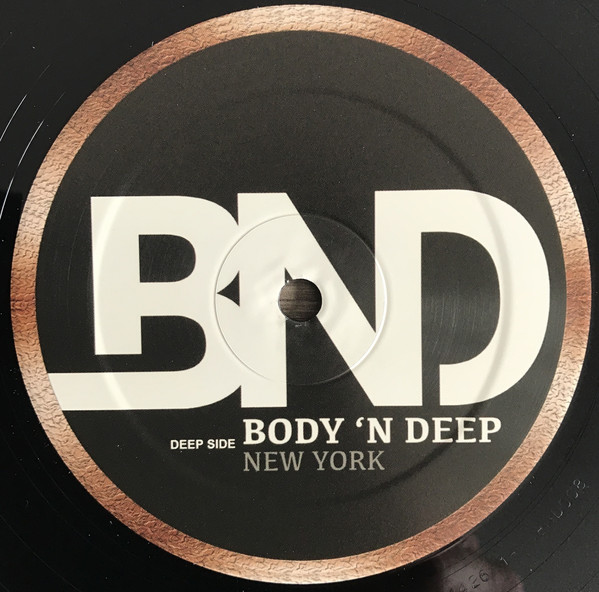 - NEW RELEASE
Sorry, this item is currently unavailable.
ARTIST:
Kai Alce / Arnout, Alex / Bottone, Alfonso / Javonette
TITLE:
BND Project Vol 2
LABEL:
Body n Deep
CATNO:
BND008
STYLE:
Deep House / Jazzy Grooves / Soulful House /
FORMAT:
Vinyl record
DESCRIPTION:
One for the heads here on Body and Deep outta Holland. First out of the blocks is Atlanta house mainstay and a master of smooth and seductive sounds - as well as being the NDATL label boss - Kai Alce. His 'Dreamin' is a timeless classic with cuddly organ chords neatly draped over shuffling drums while a distant male vocals brings the subtle soul. UK vet Alex Arnout then dips down into pad laced after hours territory and Alfonzo Bottone layers up sunny synths, broken beat drum work and jazzy chords on 'Mindfully'. Javonntte's 'Too High' is a typically classy vocal house groove with some fine samples making it sure to pop right off in the club.

About Alex Arnout: I have been producing house music under different guises (DaLunartikz, Dread Poets, Sublunar, Ceramix) for the last ten years. In 1999 I started working with Daz I Kue from Bugz In the Attic whilst engineering for Arthrob Records in London and formed 'Da Lunartikz'. In 2000 we announced ourselves on the scene with 'Higher', a classic broken beat track which was released to critical acclaim and championed by the likes of Seiji, Bugz in the Attic and Cosmo. I carried on engineering for Arthrob for another 3 years, gaining valuable skills from working with various producers, as well as holding numerous residencies and guest slots around the world:- Pin Up (Ibiza), Danzatoria (Barcelona), Fabric (London), Dance Valley (Amsterdam/Barcelona), Circo Loco (Ibiza), Club Loop (Tokyo), Mecca (Prague). In 2003 I met up with old friend Leiam Sullivan and after jamming in the studio for a while we came up with a remake of 'Can U Dance' an old Kenny Jammin Jason track made back in 1986. The track was played by dj's right across the board from Danny Tenaglia, Ray Roc, Sasha, Peace Division to Hector Romero, Satoshie Tomiie and Dj Disciple. It also went on to reach the number 1 spot on Pete Tong's Essential Buzz, Coolcut and Mixmag charts. So we started working together as Ceramix and after various productions and remixes (Peace Division, Low End Specialists), I set up my own London based imprint 'Dogmatik' Records with my production partner Leiam. The label was launched in 2006 and is already acquiring a fan base and a new roster of artists. Read more on Last.fm. User-contributed text is available under the Creative Commons By-SA License; additional terms may apply.
FREE SHIPPING ON ORDERS OVER £100 TO UK MAINLAND ONLY
See exclusions
View Cart