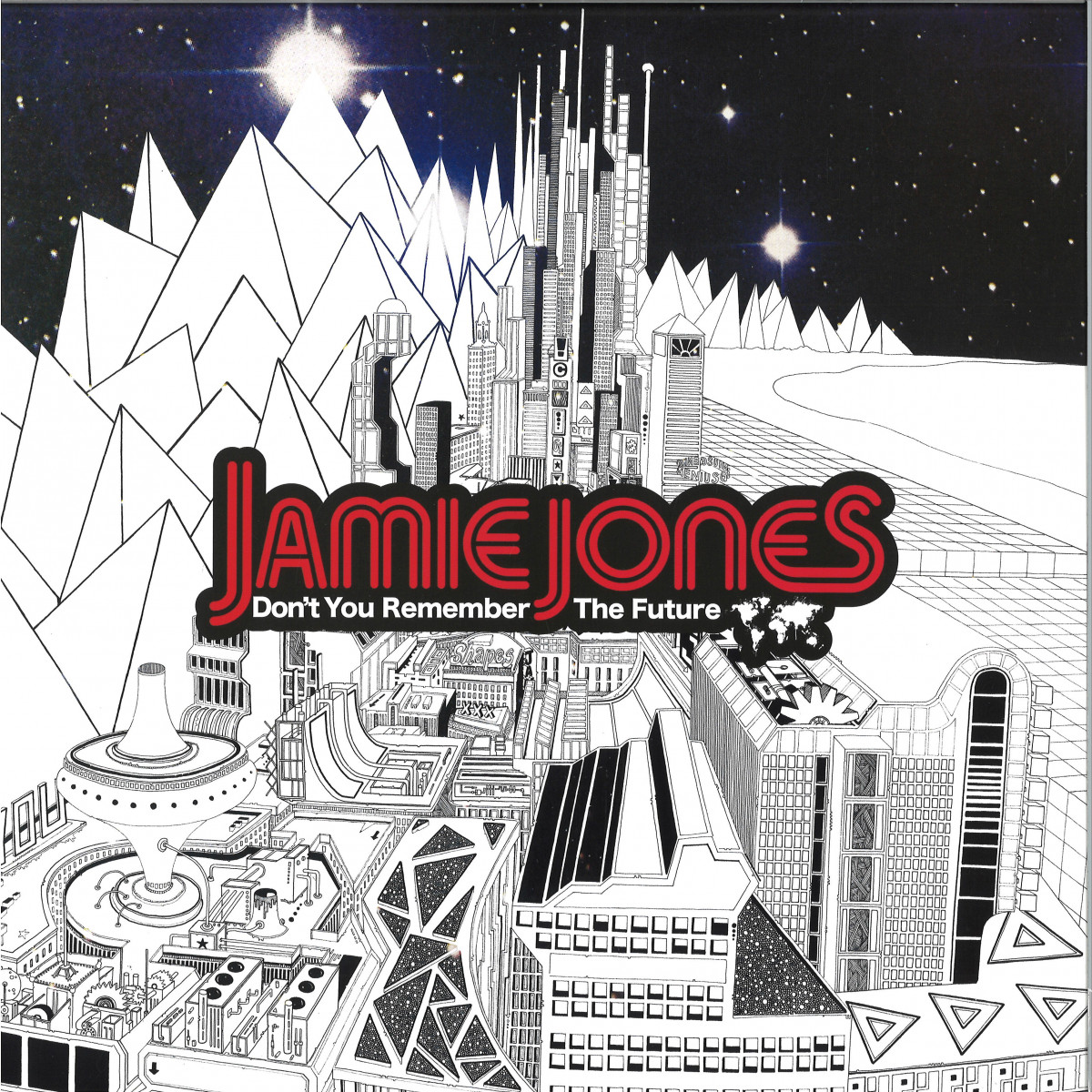 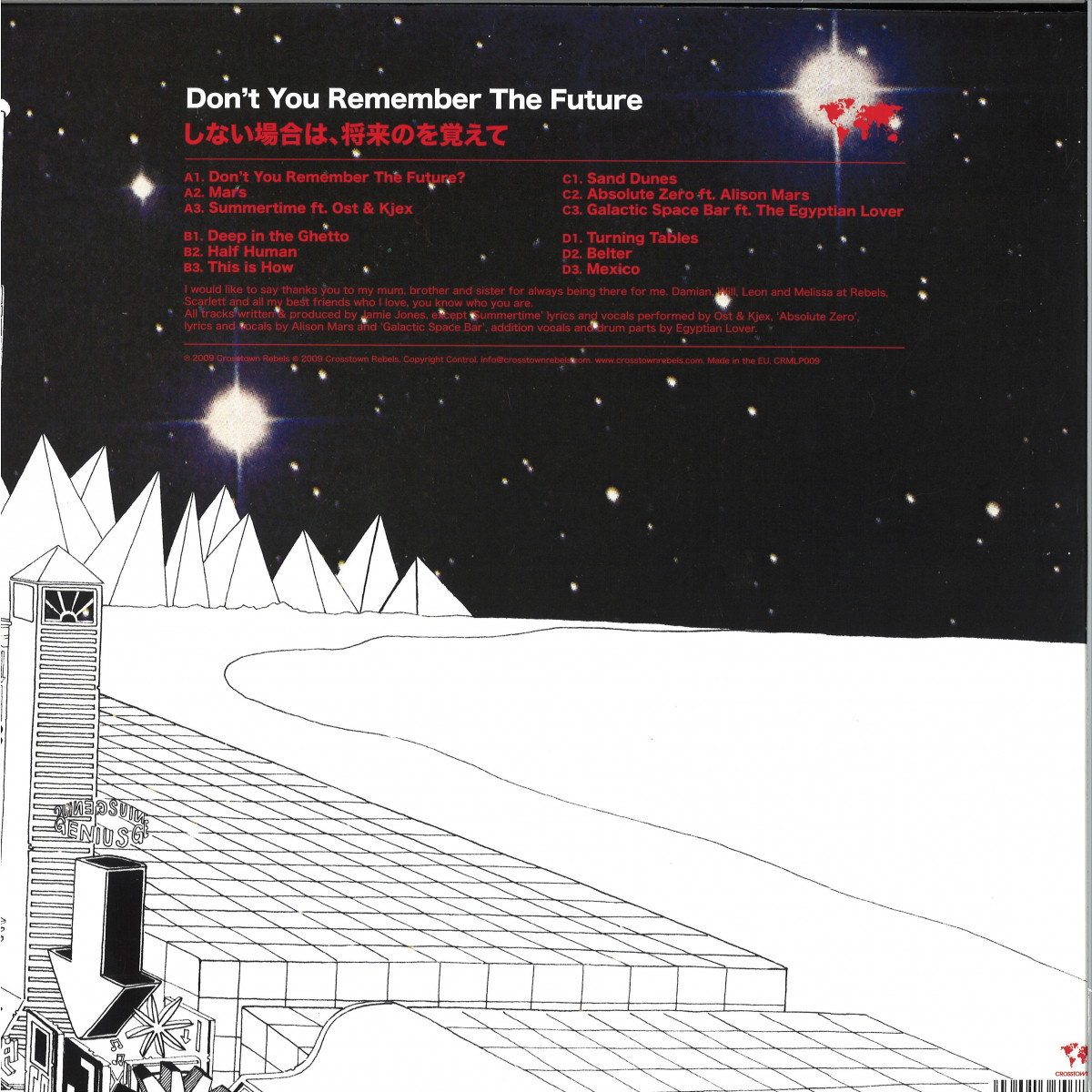 There are some talents that remain inconspicuous and then there are some you can’t ignore. Jamie Jones is the latter, quickly rising to superstar status in underground dance circles over recent years. Releases on Crosstown Rebels Hot Creations, Defected, Cocoon, Get Physical and BPitch have catapulted him to become a cult figure and he is widely admired for his true originality. From his debut single ‘Amazon’, to his albums' anthem ‘Summertime’, his unique sound has won him worldwide audiences and this album has been widely anticipated as one to change the face of current house music.

With ‘Don’t You Remember The Future’ Jamie Jones delivers an album of “intergalactic techno house, where old school prince meets cybertron.” A seamlessly blended up-tempo mix filled with eerie and energetic moments. Featuring ten brand new tracks from Jamie Jones, alongside this years dance floor anthem ‘Summertime’ and the current ‘Galactic Space Bar’ - which features the vocals of Egyptian Lover - the album’s twelve tracks are stitched together in an entangled web of beats and bleeps, available digitally as separate edits.

Cosmic cuts such as ‘Mars’ and ‘Deep In The Ghetto’ create a new dimension through soaring synths and idiosyncratic samples while the sonic dance floor weapons ‘Half Human’ and ‘This Is How’ release the lethal disco master within Jamie Jones. The jacking, peak time moments of ‘Summertime’ and ‘Sand Dunes’ produce a current take on the early acid house sound and each step of this peculiar story solidifies the strange notion of being within an undiscovered time and place. ‘Don’t You Remember The Future’ features the guest vocals of a variety of musical souls, checking off some of Jones’ remote influences and revealing the greater versatility of this skillful artist. Norwegian oddball duo Ost & Kjex feature on the anthem, ‘Summertime’.

The seductively charged ‘Absolute Zero’ unmasks the talent of London based DJ, producer and vocalist Alison Mars (AKA Alison Marks), resulting in a beautifully epic and mysterious after hours track, and the toxic ‘Galactic Space Bar’ features live vocals from one of the creators of the electro scene, The Egyptian Lover, an old hero to Jamie Jones through early rap cuts like ‘Egypt, Egypt’ and ‘I Need a Freak .’ ‘Don’t You Remember The Future’ vinyl release is the album that brought the future into the present."

Jamie Jones is renowned for his innovative music; his cross genre band, Hot Natured; and his pioneering label, Hot Creations. His endless touring schedule includes nearly every major city and festival around the world; such spectacles as Glastonbury, Tomorrow Land, and Burning Man, as well as highly esteemed clubs like Warung, Fabric, and Womb. In addition, he holds his own weekly party, “Paradise,” in Ibiza every summer at the ledgendary DC-10 as well as regular, global pop up parties. Read more on Last.fm. User-contributed text is available under the Creative Commons By-SA License; additional terms may apply.
FREE SHIPPING ON ORDERS OVER £100 TO UK MAINLAND ONLY
See exclusions
View Cart