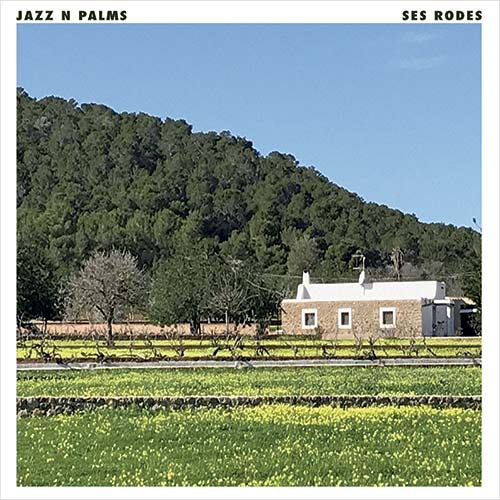 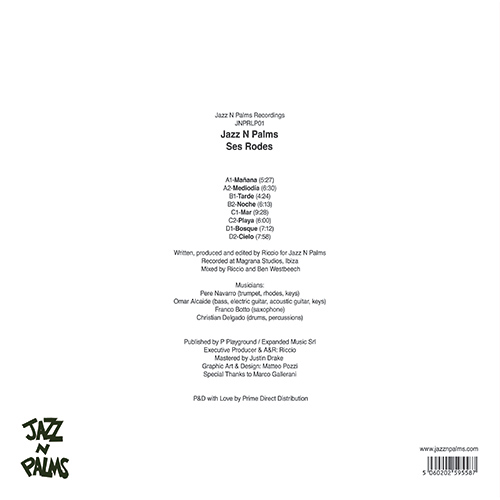 Ibiza might be known as the party capital of the world but it also has a silent and ancestral side that is sweet and slow. It's surrounded by beautiful nature and rhythms, and that is what has made artists and adventurers fall in love with the place ever since the 1930s. This new double album is dedicated to that way of life, which has remained almost unchanged till the early '80s. It is presented as a cartesian grid of Space-Time - one record is about space and the environment with tracks Mar, Playa, Bosque and Cielo meaning Sea, Beach, Forest and Sky, and the other follows the times of the day on tracks Mañana, Mediodía, Tarde, Noche, meaning Morning, Midday, Evening, and Night.

The Jazz N Palms label and producer is Riccio, who has put out a series of promotional edits on vinyl and cassette during the last three years. Ahead of conceiving this album, he met one of the youngest and most talented musicians of the island at a jazz night at the famous Pikes hotel and the pair went on to work together here. The resulting hour of music is inspired by the jazz-fusion of the late '70s, offered up in a contemporary way and was recorded in two sessions between the winter of 2020 and the spring of 2021 at Magrana Studios, where several rock bands have recorded since the early 2000s. It was mixed by island resident Ben Westbeech and Riccio.

The album kicks off with lush and breezy jazz-funk stylings and takes in lively lounge sounds, blissed-out downtempo, sunny broken beat and late-night synth laced beats that are perfect for open-air dances, cocktails on the terrace or grown-up discos.

This is a timeless album of great musicianship that taps into a very different and superbly soothing side of Ibiza.


"A truly special LP from Jazz N Palms. Each song oozes class and sophistication without feeling too snooty! A Jazz heart with a Balearic spirit and a shining example of the many talented musicians living in Ibiza and the power of the collaborative effort. Well done Riccio for bringing it all together so smoothly!” Andrew Livesey - The Brothers Grim, Pikes Ibiza

"Jazz in the Balearic sphere has probably always been an integral element, but to hear it in so much new music as well, is amazing.

I have been a big fan of the Jazz n Palms edits all the way, and play vol. 1 to 6 at any chance given….. Taking the vibe, a notch up, releasing new compositions embracing both the old 70’s sound, and rubbing it up with a modern spice, works tremendously.

This album is full of superior productions, with Mañana and Playa being the instant winners here. A new lighthouse is born…." - Mike Salta