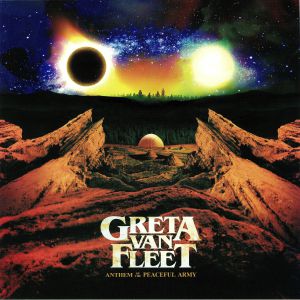 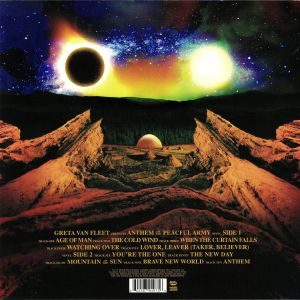 - NEW RELEASE
Sorry, this item is currently unavailable.
ARTIST:
Greta Van Fleet
TITLE:
Anthem Of The Peaceful Army
LABEL:
Republic Records
CATNO:
6794975
STYLE:
Blues Rock /
FORMAT:
Vinyl record
DESCRIPTION:
Greta Van Fleet hail from Frankenmuth, Michigan, home of Bronner's CHRISTmas Wonderland, the store that keeps the holiday spirit alive nearly every day of the year. Living with the specter of Santa is bound to keep a young man residing in a fantasy land, and so it is with Greta Van Fleet: They inhabit a world they never experienced, namely the '70s. Every member of Greta Van Fleet -- which consists of a heap of brothers called Kiszka and a drummer named Danny Wagner, all born too late to witness either Kingdom Come or Jimmy Page & Robert Plant's Unledded reunion -- act as if the earth stopped turning in 1974, the year when Led Zeppelin still traded in myths learned from J.R.R. Tolkien and strode the earth like golden gods. Try as they may -- and, lordy, do they try -- Greta Van Fleet never seem immortal on Anthem of the Peaceful Army, the 2018 album billed as their debut (From the Fires, a record that is only 12 minutes shorter than Anthem, is apparently a double-EP). Blame it on GVF's desperate desire to hit their marks precisely. The group is so intent on recapturing the majestic lumber of Zeppelin at their peak, they dare not miss a step, letting the riffs pile up so they suggest epics. Sometimes, guitarist Jake Kiszka, bassist Sam Kiszka, and drummer Danny Wagner do work up a head of drama -- no swing, of course, because it's harder to replicate John Bonham's beat than approximate Jimmy Page's guitar army -- but they're undone by Josh Kiszka, a singer who is intent on singing with velocity that he can't muster. Josh may be the weak link, but he merely reveals how the whole band seem to have learned their moves from watching late-night concerts on Palladium while buying pre-worn vintage-styled T's at Urban Outfitters. For the band and audience alike, Greta Van Fleet is nothing more than cosplay of the highest order.

PLAY
CUE
MP3
a1
Age Of Man
a2
The Cold Wind
a3
When The Curtain Falls
a4
Watching Over
a5
Lover, Leaver
b1
You're The One
b2
The New Day
b3
Mountain Of The Sun
b4
Brave New World
b5
Anthem

Greta Van Fleet is an American rock band from Frankenmuth, Michigan, formed in 2012. It consists of vocalist Josh Kiszka, guitarist Jake Kiszka, bassist Sam Kiszka, and drummer Danny Wagner. They were signed to Lava Records in March 2017 and a month later the band released their debut studio EP, Black Smoke Rising. Their debut single, "Highway Tune", topped the Billboard US Mainstream Rock and Active Rock Rock stations in September 2017 for four weeks in a row. A second EP From the Fires, containing the four songs from Black Smoke Rising and four new songs, was released on November 10, 2017, alongside a second single, "Safari Song". The band's heavy rock sound is influenced by the work of Led Zeppelin and many other rock and blues acts, with lead vocalist Josh Kiszka having a voice that has been compared to Robert Plant's "husky howl. Greta Van Fleet's music has been categorized as hard rock and blues rock. Although all four members bonded over blues, each does have their own music tastes; Jake gravitates towards rock and roll, Sam likes jazz, Danny prefers folk, and Josh likes world music. Sam stated that "It's not like we set out to be a rock and roll band, it's just that sound that comes out [when] we get together and play." Songwriting is done by the band as a whole after one of the four members finds the concept for a song. Danny said a lot of their songs are first written in a "folk set up" before evolving into something else. Greta Van Fleet are often compared to Led Zeppelin. Jake related that he "... went through a year of really intensely studying what [Jimmy] Page did ...", but he has studied other virtuoso rock guitarists in a similar manner, specifically mentioning Pete Townshend. Likewise, on his voice being compared to Robert Plant's, Josh said that Plant has certainly been an influence, "though it's not what I was going for." Stating that he did not even know who Led Zeppelin was until high school, he explained that his singing style came out naturally one day while struggling to be heard over the rest of the band. In a March 2018 interview, Plant cited Greta Van Fleet as one of his favorite young bands, saying "they are Led Zeppelin I" and describing Josh as "a beautiful little singer." Some of Jake's guitar influences include John Lee Hooker, Elmore James, Bert Jansch, Eric Clapton and Keith Richards. Some of the drummers that inspired Danny are Carmine Appice, John Bonham, Mitch Mitchell and Michael Shrieve. Sam's favorite bass player is Motown session bassist James Jamerson. Read more on Last.fm. User-contributed text is available under the Creative Commons By-SA License; additional terms may apply.
FREE SHIPPING ON ORDERS OVER £100 TO UK MAINLAND ONLY
See exclusions
View Cart