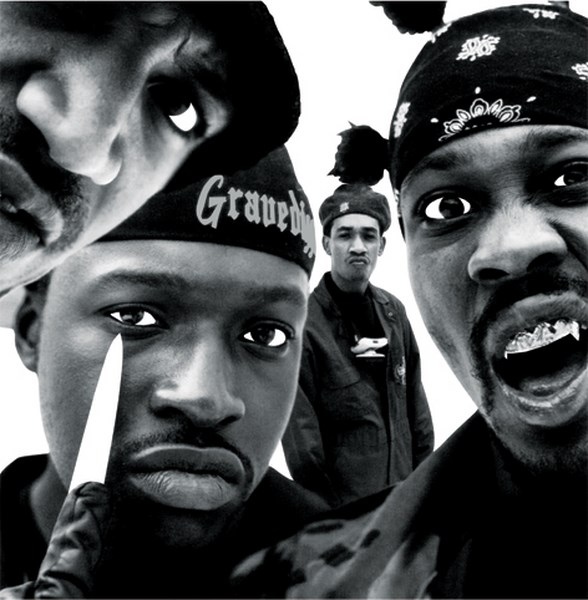 PLAY
CUE
MP3
a1
Just When You Thought It Was Over (Intro)
a2
Constant Elevation
a3
Nowhere To Run, Nowhere To Hide
a4
Detective Trip (Trippin')
b1
2 Cups Of Blood
b2
Blood Brothers
b3
360 Questions
b4
1-800 Suicide
c1
Diary Of A Madman
c2
Mommy, What's A Gravedigga?
c3
Bang Your Head
c4
Here Comes The Gravediggaz
d1
Graveyard Chamber
d2
Deathtrap
d3
6 Feet Deep
d4
Rest In Peace (Outro)

Gravediggaz was an American hip-hop group from New York City, known for its dark sense of humor and abrasive, menacing soundscapes. Gravediggaz blended hardcore hip hop, gangsta rap and heavy metal with horror elements to pioneer the hip-hop subgenre of horrorcore. The group was formed in 1992, bringing together Prince Paul (The Undertaker), Frukwan (The Gatekeeper), Poetic (The Grym Reaper) and RZA (The RZArector). It came about largely due to the efforts of Prince Paul. Frukwan and Prince Paul were previously together in the group Stetsasonic. According to Frukwan, the group's name means "digging graves of the mentally dead, and it stood for resurrecting the mentally dead from their state of unawareness and ignorance." The group's lyrics mix black humor (regarding topics such as suicide, death, killing, psychopathy, hell, etc.), criticism regarding the music industry, cartoonish violence reminiscent of the Geto Boys, and esoteric references to the Nation of Gods and Earths. The group pioneered the horrorcore genre. The group's first album was originally to be titled Niggamortis; however, this potentially risqué title was changed to 6 Feet Deep for the American market (European versions of the album retained the original title, and also included the bonus track "Pass the Shovel"); it was released on August 9, 1994. The four members adopted Gravedigga alter egos for their work with the group: RZA became The RZArector, Poetic became The Grym Reaper, Prince Paul became The Undertaker, and Frukwan became The Gatekeeper. In 1995, the three rapping members (without Prince Paul) released a collaborative EP titled "The_Hell_E.P." with UK trip hop artist Tricky. The second full-length Gravediggaz album The Pick, the Sickle and the Shovel was less humorous, dealing more with social and political issues; it also used calmer and more conventional production. Prince Paul played a considerably smaller role in the making of this album, with many of the production duties now taken care of by RZA and his Wu-Tang affiliates (including True Master and 4th Disciple). A bootleg Gravediggaz album surfaced in 1998, called Scenes From The Graveyard. It featured seven unreleased tracks plus some remixes from the first two albums. Gravediggaz recruited DJ Diamond J. Poetic died of colon cancer in July 2001. Frukwan stated in an interview not long after Poetic's death that a new album using leftover Poetic material would be released. Nightmare in A-Minor, the third official album for Gravediggaz, came out in 2001; it featured two of the original members, Poetic and Frukwan. This album was their darkest work yet, including many references to Poetic's struggle with cancer, as well as apocalyptic themes to do with the teachings of the Five Percent Nation. Although RZA did not take part in the album, some Wu-Tang Clan affiliates such as 4th Disciple, True Master and Beretta 9 were involved. The album was mostly produced by Poetic and Frukwan. A different version of the album (minus the song "Better Wake Up") was released in 2002, for which some of the tracks created by Poetic were replaced or altered. In 2003 Frukwan released his debut solo album, Life. The fourth Gravediggaz album 6 Feet Under was released in 2004 by Cleopatra Records and featured songs from Nightmare in A-Minor and Life. According to Frukwan, he had nothing to do with the release and claimed that song titles were changed without permission, making it an unauthorized release. In 2010, Gravediggaz recorded a new song, "2 More Cups of Blood". In 2011, it was announced that the group had been recording new tracks involving Shabazz The Disciple & Killah Priest. In 2018, Gatekeeper released "1 Cup of Blood" under the Gravediggaz name. Read more on Last.fm. User-contributed text is available under the Creative Commons By-SA License; additional terms may apply.

OTHER RELEASES ON AAA RECORDINGS OR BY GRAVEDIGGAZ:

We have many other items in stock by Gravediggaz and on the label AAA Recordings.