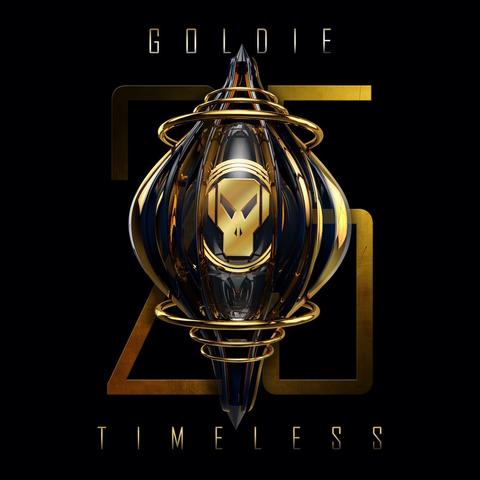 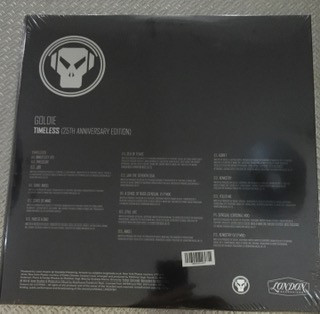 A complex debut album, Timeless founded a new chapter in the history of the electronic genre originally reaching no. 7 in the charts and since been celebrated for its unique blend of sublime strings, beautiful atmospheres and sophisticated vocals. Inarguably an ambitious blueprint at the time; Goldie’s production in 1995 fashioned the edgy rhythms and bass of jungle into a newly futuristic model, now globally admired as drum & bass.

The 25 year editions feature rarities and remixes unearthed from Goldie’s personal archive. Remastered with Goldie overseeing the process himself.

There are 3 artists who have recorded as Goldie: 1. Goldie is a UK drum & bass/jungle producer. 2. Goldie is a 1970s British pop/rock band. 3. Goldie, a.k.a. Goldie Zelkowitz was the stage name of Genya Zelkowitz (later Genya Ravan) of Goldie & The Gingerbreads. 1 - Clifford Price, better known as Goldie (born September, 1965 in Wolverhampton) is a British electronic music artist, disc jockey, and actor. As a musician he works mainly within the jungle and drum and bass genres, and has helped to promote these styles globally. Music career In 1992 he collaborated with Icelanders Thorhallur Skulason and Sigurbjorn Thorgrimsson on his first track as Ajax Project while he was doing some design and A&R work for 4 Hero’s Reinforced label. His releases Killa Muffin b/w Krisp Biscuit and the Dark Rider EP (featuring the classic Menace) were put out under an early moniker Rufige Cru on Reinforced. His track Terminator recorded under the name Metalheads in 1992 was a huge hit. In 1993 he released another classic 12” on the Synthetic Hardcore Phonography label, Angel. 1994 saw him setting up his own record label, Metalheadz. The label was a huge success releasing some of the most important 12”s of that era and remains hugely successful and respected to this day. His first globally released album, Timeless, followed in 1995. Timeless shot straight into the album charts at number seven, which was a first for a drum ‘n’ bass record. The album fused the breakbeats and basslines common in jungle with orchestral textures and soulful female vocals. The album’s title track was a 21-minute symphonic piece. Inner City Life from that album sold over 15,000 copies on vinyl. With his reputation firmly established, he released his second album in 1998, Saturnzreturn. The album’s opening track, Mother is also an hour long orchestral drum and bass piece. The remainder of the album features appearances by David Bowie, Noel Gallagher of Oasis, and KRS-One. In 2002, Price said that he had been working for three years on a film called Sine Tempus, described as a coming-of-age story of a young paintbrush artist, and in 2006 announced its soundtrack as his new album. The album was released via the metalheadz website in 2008. The film is still listed as ‘forthcoming’. Price is also known for his work as the leader of the Rufige Kru. This group has no fixed members; it has included some of most well-known drum and bass producers such as Technical Itch, Heist, Cujo, Agzilla Da Ice, Doc Scott and Rob Playford. During August and September 2008 the BBC broadcast Maestro, a reality television show in which eight celebrities, including Price, learned to conduct a concert orchestra. Price was placed second, behind Sue Perkins. On July 31 and August 6, 2009, “Classic Goldie” was broadcast. The two-part television show was a result of his success in the Maestro show. In the program, Goldie learned to write a score for a large orchestra and choir. The resulting composition, commissioned by the BBC, was entitled Sine Tempore (Timeless). It was performed at two children’s Promenade concerts in the Royal Albert Hall on August 1 and August 2. The concert featured music connected with Charles Darwin as well as the creation and evolution of the world. 2. Goldie were a British 1970s pop/rock band. They are best known for the hit single "Making Up Again", which reached Number 7 in the UK Singles Chart in July 1978.[1] The single was released on the Bronze label with catalogue reference BRO 50, and the track spent 11 weeks in the chart.[1] Their lead vocalist was Peter McDonald. 3. In 1962 Genya Zelkowitz, a.k.a. Goldie Zelkowitz (who would eventually change her last name to Genya Ravan -as she became better known as the lead singer of the band Ten Wheel Drive beginning in 1969) - first as the lead-singer of Richard Perry's band The Escorts- met Ginger Panabianco in a New York club. Ginger was on stage, performing as the drummer for one of Perry's friends. The discovery of a female drummer inspired in Genya Ravan the idea of an all-female rock band. The name of the would-be band Goldie & The Gingerbreads was decided upon rapidly: Goldie was the name by which Ravan's mother chose to call her after their arrival in the United States from post-war Poland, while gingerbread was a play on Ginger's name. In 1969 Genya Ravan went on to form Ten Wheel Drive. Read more on Last.fm. User-contributed text is available under the Creative Commons By-SA License; additional terms may apply.
FREE SHIPPING ON ORDERS OVER £100 TO UK MAINLAND ONLY
See exclusions
View Cart