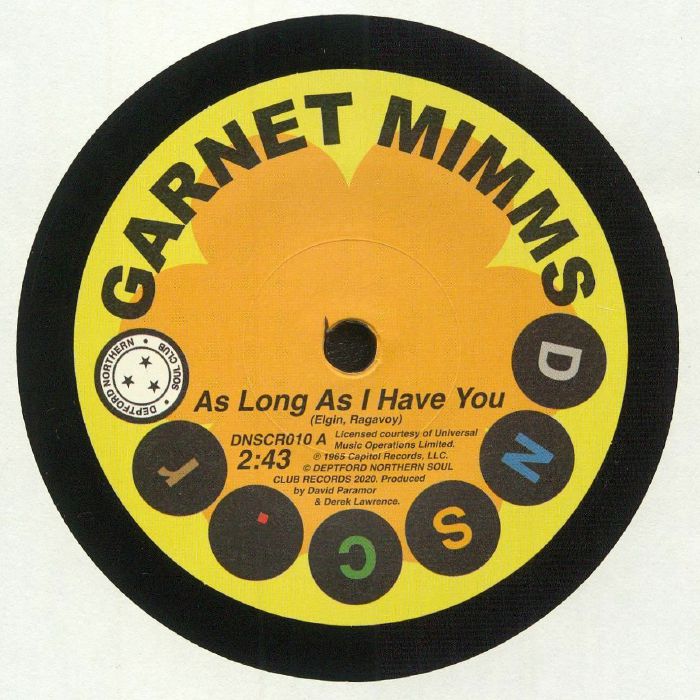 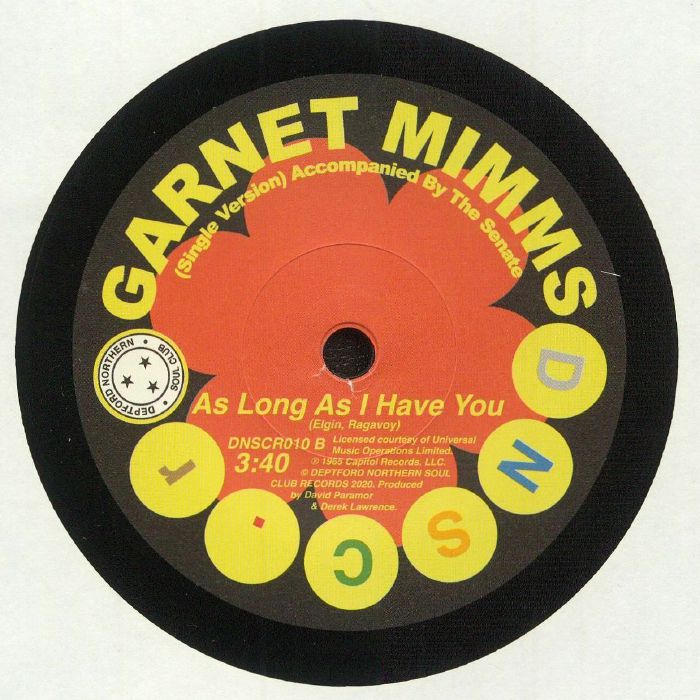 GARNET MIMMS - AS LONG AS I HAVE YOU

- NEW RELEASE
Sorry, this item is currently unavailable.
ARTIST:
Garnet Mimms
TITLE:
As Long As I Have You
LABEL:
Deptford Northern Soul Club Records
CATNO:
DNSCR010
STYLE:
Soul / Northern Soul / Northern Soul / Soul /
FORMAT:
Vinyl record
DESCRIPTION:
Soul Classic Remastered - Two versions of this much-loved gem (covered by Led Zeppelin and Roger Daltrey from The Who more recently), ‘As Long As I Have You’ was the title track of Garnet Mimms’ first solo album from 1964 which made a brief appearance as a seven inch and now goes for £500.

Garnet Mimms (born Garrett Mimms on November 16, 1933 in Ashland, West Virginia) is an American singer, influential in soul music and rhythm and blues with Garnet Mimms & the Enchanters. He is best known for the hit "Cry Baby" (later recorded by Janis Joplin) and "A Quiet Place," a popular song in the Carolina Beach Music community. Mimms grew up in Philadelphia, where he sang in gospel music groups such as the Evening Stars, the Harmonizing Four, and the group with which he would record his first record in 1953, the Norfolk Four. He returned to Philadelphia after serving in the military and formed doo-wop group, the Gainors in 1958. In 1961, Mimms and Sam Bell from the Gainors left to form a new group, Garnet Mimms and the Enchanters, with Zola Pearnell and Charles Boyer. The group moved to New York and began to work with the songwriter and record producer, Bert Berns. Berns signed them to the United Artists label and wrote the hit, "Cry Baby" for them with songwriting partner Jerry Ragovoy. The song topped the R&B chart and went to #4 on the Billboard Hot 100 chart in 1963. It sold over one million copies, and was awarded a gold disc. Mimms and the group had a follow-up double sided hit, "For Your Precious Love" and "Baby Don't You Weep", both tracks entering the Billboard Top 30, before he went solo in 1964. In 1966, Berns and Ragavoy produced another big hit for Mimms, "I'll Take Good Care Of You", which climbed to #15 in the R&B chart and #30 in the Hot 100. He worked with Jimi Hendrix in the UK the following year. He did some recording on the MGM and Verve labels. In 1969, Led Zeppelin performed an extended version of Mimms' "As Long As I have You" at various stops on their U.S tour. In the 1970s, he released a few funk songs as Garnet Mimms and the Truckin' Co. He had his only hit in the United Kingdom at this time, when "What It Is" reached number 44 for one week on the UK Singles Chart in June 1977. Mimms was given a Pioneer Award in 1999 by the Rhythm and Blues Foundation. In the 1980s, Garnet found his calling ministering to lost souls in prison, but in 2007, returned to recording and a year later, released a new gospel album Is Anybody Out There? on the Evidence label, produced and (primarily) written by Jon Tiven. Read more on Last.fm. User-contributed text is available under the Creative Commons By-SA License; additional terms may apply.
FREE SHIPPING ON ORDERS OVER £100 TO UK MAINLAND ONLY
See exclusions
View Cart