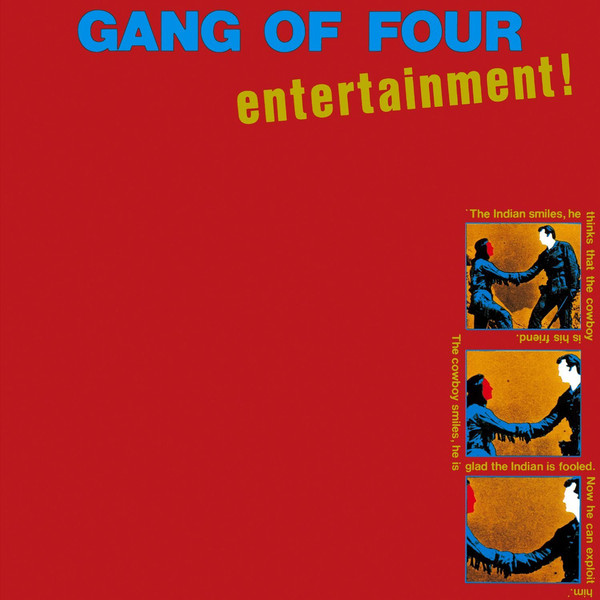 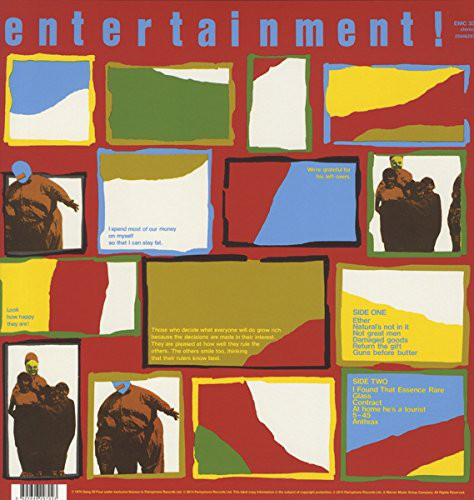 - NEW RELEASE
Sorry, this item is currently unavailable.
ARTIST:
Gang Of Four
TITLE:
Entertainment
LABEL:
Parlaphone
CATNO:
0825646297023
STYLE:
Rock / Punk /
FORMAT:
Vinyl record
DESCRIPTION:
Rock / Post Punk Debut LP From 1979 - Repressed - Some of the most memorable music of the late-70s British new wave era came courtesy of Gang Of Four. Formed in Leeds in 1977 the band were one of the first to be inspired by punk, but come up with a something different from the usual three-chord thrash of the time. The band's 1979 debut album, "Entertainment!", poured punk, funk, and politics into a groundbreaking sound that continues to influence such worthy modern rock descendants as Hot Hot Heat, The Rapture, and !!!. Essential

Entertainment! is one of those records where germs of influence can be traced through many genres and countless bands, both favorably and unfavorably. From groups whose awareness of genealogy spreads wide enough to openly acknowledge Gang of Four's influence (Fugazi, Rage Against the Machine), to those not in touch with their ancestry enough to realize it (rap-metal, some indie rock) -- all have appropriated elements of their forefathers' trailblazing contribution. Its vaguely funky rhythmic twitch, its pungent, pointillistic guitar stoccados, and its spoken/shouted vocals have all been picked up by many. Lyrically, the album was apart from many of the day, and it still is. The band rants at revisionist history in "Not Great Men" ("No weak men in the books at home"), self-serving media and politicians in "I Found That Essence Rare" ("The last thing they'll ever do?/Act in your interest"), and sexual politics in "Damaged Goods" ("You said you're cheap but you're too much"). Though the brilliance of the record thrives on the faster material -- especially the febrile first side -- a true highlight amongst highlights is the closing "Anthrax," full of barely controlled feedback squalls and moans. It's nearly psychedelic, something post-punk and new wave were never known for. With a slight death rattle and plodding bass rumble, Jon King equates love with disease and admits to feeling "like a beetle on its back." In the background, Andy Gill speaks in monotone of why Gang of Four doesn't do love songs. Subversive records of any ilk don't get any stronger, influential, or exciting than this.

PLAY
CUE
MP3
a1
Ether
a2
Natural's Not In It
a3
Not Great Men
a4
Damaged Goods
a5
Return The Gift
a6
Guns Before Butter
b1
I Found That Essence Rare
b2
Glass
b3
Contract
b4
At Home He's A Tourist
b5
5.45
b6
Love Like Anthrax

Gang of Four are a British post-punk group from Leeds, England. Original personnel were singer Jon King, guitarist Andy Gill, bass guitarist Dave Allen and drummer Hugo Burnham. They were fully active from 1977 to 1984, and then re-emerged twice in the 1990s with King and Gill. In 2005, the original lineup reunited. The group had a single in the British Top 60 with "At Home He's A Tourist" in 1979, which was blacklisted by Top Of The Pops for its use of the relatively innocuous term "rubbers". Storming, Doc Marten-booted and fueled by a heady cocktail of Gramsci, Marx and lager, out of the Leeds art-school scene that produced The Mekons and Delta 5, they played a stripped-to-the-wire, funk-fueled permutation of punk rock. This is best exemplified by the dry production and forceful polemic of debut effort Entertainment! - Gang of Four's later albums (Songs Of The Free and Hard) found them softening some of their more jarring qualities, and drifting towards disco. Critic Stewart Mason has called "Love Like Anthrax" (their first single, later re-recorded as "Anthrax") not only the group's "most notorious song" but also "one of the most unique and interesting songs of its time"; it's also a good example of Gang of Four's social perspective. After a minute-long, droning, feedback-laced guitar intro, the rhythm section sets up a funky, churning beat, and the guitar drops out entirely. In one stereo channel, King sings a "post-punk anti-love song", comparing himself to a beetle trapped on its back ("and there's no way for me to get up") and equating love with "a case of anthrax, and that's some thing I don't want to catch." Meanwhile in the other stereo channel (and slightly less prominent in the mix), Gill reads a deadpan monologue about public perception of love, and the prevalence of love songs in popular music: "Love crops up quite a lot as something to sing about, 'cause most groups make most of their songs about falling in love, or how happy they are to be in love, and you occasionally wonder why these groups do sing about it all the time." The simultaneous vocals are more than a little disorienting, especially when Gill pauses in his examination of love songs to echo a few of King's sung lines. Allen left after Solid Gold and was replaced briefly by Buster Jones (who never recorded with the group), then by Sara Lee; Allen later co-founded Shriekback, Low Pop Suicide and The Elastic Purejoy. Their angular, slashing attack and liberal use of dissonance had a significant influence on their post-punk contemporaries in the States, including Mission Of Burma. Gang Of Four went on to influence a number of successful funk-tinged alternative rock acts throughout the 80s and 90s - even, arguably, many rap-rock and nu metal groups who were "not in touch with their ancestry enough to realize it" (Andy Kellman, on allmusic.com) - although few of their followers were as arty or political. Michael "Flea" Balzary of Red Hot Chili Peppers has stated Gang of Four were very influential on his band's early music. Gang of Four can also be credited as one of the early influences on techno or electronic music; they released dance remixes of several later singles. Recently the band has enjoyed a resurgence in popularity, initially due to emergence of new post-punk influenced bands such as The Rapture and Radio 4 and then the rise of Franz Ferdinand and Bloc Party, which led to the renewed patronage of the NME. The original Burnham/Allen/Gill/King lineup reformed in November 2004. In October of 2005, Gang of Four released a new LP featuring new recordings of past songs, entitled Return The Gift. Dave Allen also co-hosts a twice-weekly "New Music Hour" radio show with Portland, Oregon's 94.7 alternative radio station. Andy Gill died on 1st February, 2020 from, according to reports, a respiratory illness caught on the group's tour in Asia the preceding year. He was the only original member still playing in the Gang Of Four. Read more on Last.fm. User-contributed text is available under the Creative Commons By-SA License; additional terms may apply.
FREE SHIPPING ON ORDERS OVER £100 TO UK MAINLAND ONLY
See exclusions
View Cart