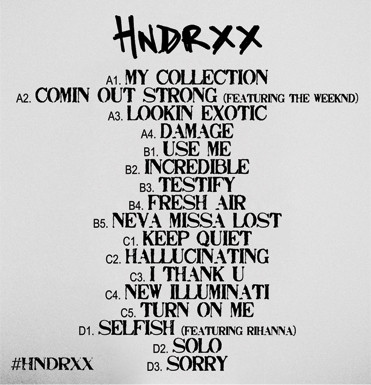 Released just a week after his self-titled fifth effort, Future's HNDRXX provided an introspective and confessional complement to the more extroverted Future. Languid and self-aware, HNDRXX presents Future as a man lamenting past sins and missteps. Without ever mentioning her by name, ex-girlfriend Ciara looms over many of the songs, the former couple's legal troubles bleeding into Future's wounded lyrics. For fans in search of more substance than what would typically be found in his usual trap bangers, HNDRXX offers one of the deepest views into the rapper born Nayvadius Wilburn's soul. So while the production here isn't as exciting as on Future, the vulnerability displayed makes HNDRXX a highlight in Future's catalog. "Use Me" serves double-duty, not only as a plea to a woman, but also as a tempting call from his drugs. On "Turn on Me," a late-album track packed with some of his more exposed open-journal rhymes, Future wonders "why [he] ain't ha

Nayvadius DeMun Wilburn, (born November 20, 1983), better known by his stage name Future, is an American rapper, singer, songwriter and record producer from the Kirkwood neighborhood of Atlanta, Georgia. After releasing a series of moderately successful mixtapes between 2010 and 2011, Future signed a major label deal with Epic Records and fellow American rapper Rocko's A1 Recordings, which helped launch his own label imprint Freebandz. Future subsequently began working on his debut studio album "Pluto," and in April 2012 released the album to positive reviews. The album spawned five singles, all of which charted on the Billboard Hot 100. The album was later re-released in November, as "Pluto 3D." His second studio album "Honest," was released on April 22, 2014, and is also performing with his group Freeband Gang. He released his highly anticipated third studio album, "DS2," on July 16, 2015. The Atlanta rapper also released several mixtape during 2015, "Beast Mode" in January, "56 Nights" in March, and "What a Time to Be Alive (with Drake)" in September. Future released "Purple Reign" in January 2016. The 13 track mixtape was executive produced by Metro Boomin and DJ Esco, with additional production from Southside, Zaytoven, and more. Read more on Last.fm. User-contributed text is available under the Creative Commons By-SA License; additional terms may apply.

OTHER RELEASES ON AAA RECORDINGS OR BY FUTURE:

We have many other items in stock by Future and on the label AAA Recordings.