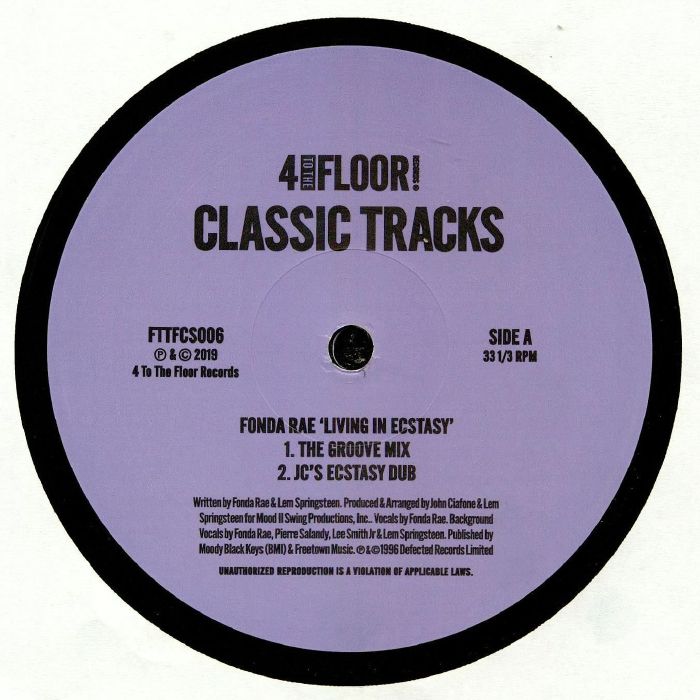 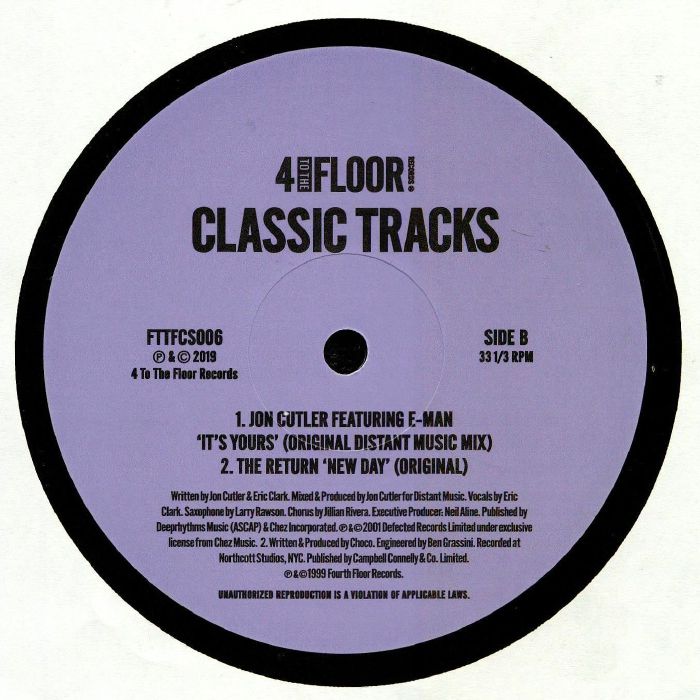 - NEW RELEASE
Sorry, this item is currently unavailable.
ARTIST:
Fonda Rae / Cutler, Jon / The Return
TITLE:
[V6] Classic Tracks - Volume 6
LABEL:
4 To The Floor
CATNO:
FTTFCS006
STYLE:
House / Deep House /
FORMAT:
Vinyl record
DESCRIPTION:
4 Tracks 4 Artist Plucked From The Vaults - 4 To The Floor is committed to delivering seminal house music to wax, making sought after heritage tracks readily available on vinyl for crate diggers to add to their collections. Now in its fifth edition, the series continues to raise the bar. The A-Side features two mixes of the mid-nineties Mood II Swing production ‘Living In Ecstasy’ by Fonda Rae. The R&B singer who was responsible for cult hits like ‘Touch Me’ delivers silky-smooth vocals that remain the focus in the opening Groove Mix, whereas JC’s Ecstasy Dub follows up with a rumbling bassline to deliver a club-focussed version. On the flip we’re greeted by a slice of 2001 goodness with the Original Distant Music Mix of Jon Cutler featuring E-Man ‘It’s Yours’, a seminal house classic. Closing out the release is The Return’s ‘New Day’, originally released on Fourth Floor Records in 1999, twenty years later this sublime and emotive piece of house music history sounds fresh as ever. Classics Volume 5 is another record box essential delivered to you by 4 To The Floor.

Fonda Rae (née Wood) is a vocal artist, writer and producer from Westchester County, New York.Fonda Rae is an American rhythm and blues singer best known for her club hits like "Over Like a Fat Rat" and "Touch Me" (the later which was later covered by Cathy Dennis). She was the first Coconut who sang for August Darnell's Kid Creole & the Coconuts, also sang lead with Don Armando's Second Avenue Rhumba Band. Rae also collaborated with more mainstream artists such as Taka Boom, The Fat Boys and Debbie Harry. She is probably best known for her work with, underground disco legend, Patrick Adams. Fonda provides all the lead vocals on the Rainbow Brown album produced by Adams, as well as singing on over fifty other releases. Read more on Last.fm. User-contributed text is available under the Creative Commons By-SA License; additional terms may apply.

Last FM Information on The Return

Please note there is more than one band named 'The Return' !!! 1. 'The Return' are a unique band, which cannot be lumped into any category, fronted by Kevin Armstrong from Whitehaven, Cumbria. Please LISTEN: https://soundcloud.com/kja/albums 2) THE RETURN hail from Ventura, CA. The three members have been playing music together since 1996 and started The Return. in January of '99. Since then they have put forth an abundance of hard work and dedication and have self-released and self-produced 2 EP's, 1 live album, and 2 full-lengths. The Return. continues to tour throughout California and the Midwest. 3) The Return is a Norwegian rock band that peaked in popularity during the late '80s with a hair metal style that went out of fashion in the early '90s. With several Top Ten smash hits to its name, most of them power ballads, the band reunited after the turn of the century and proved popular as a concert draw. Founded in 1980 in Stange, Norway, the band is comprised of Knut Erik Østgård (vocals, guitar), Steinar Hagen (guitar, vocals), Tore Larsen (bass, vocals), and Øyvind Håkonsen (drums). Return scored their initial breakout hit in 1985 with "Sheila," and a couple years later they made their full-length album debut with To the Top (1987), a Top 20 hit on the Norwegian albums chart that includes the early hit "Sing Me a Song" in addition to "Sheila." The band's second full-length effort, Attitudes (1988), was an even greater success, reaching the Top Five of the albums chart and spawning the Top Ten smash hit "Change the Attitude." The follow-up efforts Straight Down the Line (1989) and Fourplay (1991) were similarly successful, reaching the Top Ten of the albums chart and spawning the respective smash hits "Can You Forgive Me?" and "Tell Me." While the band's fifth album, V (1992), spawned another smash hit, "Take This Heart," it marked a sharp downturn in popularity, stalling at number 17 on the albums chart. Faced with a dramatically changing rock landscape in the wake of alternative rock's mainstream breakthrough, Return dissolved for the remainder of the decade. At the turn of the century, they released a chart-topping greatest-hits collection, The Best of Return (2000), plus the in-concert recording Return Live (2000); in addition, there was a series of reunion concerts. A half-decade later, the band released its first collection of new studio material in over a decade, the eponymous album Return (2005). The comeback effort didn't prove especially popular, however, as the album barely broke into the Top 40 and spawned no significant hits. Another greatest-hits collection, the double-disc compilation Best of...Both Worlds (2008), was released a few years later. ~ Jason Birchmeier, All Music Guide 4) One of several aliases used by New York house producer Jose Reynoso. Read more on Last.fm. User-contributed text is available under the Creative Commons By-SA License; additional terms may apply.
FREE SHIPPING ON ORDERS OVER £100 TO UK MAINLAND ONLY
See exclusions
View Cart